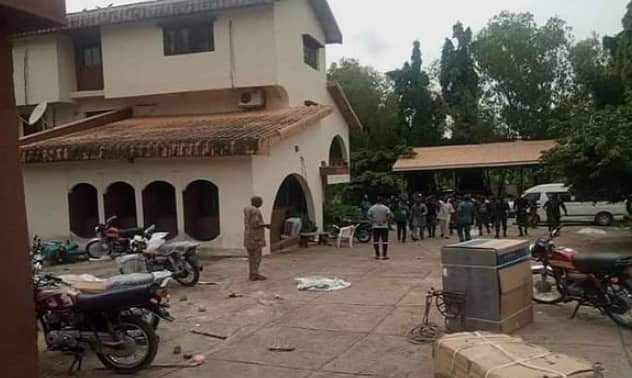 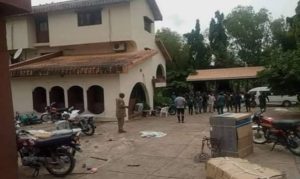 The looting resulting from the #EndSARS protests turned tragic on Saturday with the death of at least five alleged looters in Jos, Benin and Enugu.

There was apprehension that the situation in the state was fast approaching anarchy.

Apart from several government buildings that were looted, vandalized and burnt, the youths also invaded the homes of Senators Ndoma Egba and Gershom Bassey, stripping them of all valuables. Egba’s residence in Calabar was also torched by the hoodlums.

Looters also forced their way into the Ibadan property of Senator Teslim Folarin (Oyo Central) and made away with goods estimated at over N200 million.

Looters also struck in Kaduna State, forcing the state government to slam an all-day curfew on some communities in Kaduna South and Chikun local government areas.

Osun and Plateau state governments hurriedly re-imposed the 24-hour curfew they had lifted while security agents in the Federal Capital Territory and Anambra State had to fire gunshots to stop attempts to break into some warehouses.

But it was a calm day in Lagos. The easing of the curfew allowed residents to move about from 8am to 6pm and the streets were free of the armed gangs who had been in charge since Wednesday.

Two hundred and twenty-nine suspects who allegedly took advantage of the #EndSARS protest to destroy and loot public and private properties in different parts of the state are expected to be arraigned tomorrow.

Police Inspector General Mohammed Adamu on Saturday ordered the immediate mobilization of all police operational assets and resources to bring an end to the wanton violence, killings, looting and destruction of public and private property in parts of the country.

He said the country had had enough of the lawlessness of the last few days.

Three of the looters were feared dead in Jos, one in Benin and one in Enugu.

Youths in Plateau State had, early Saturday, swooped on warehouses in Bukuru and Jos to loot palliative items allegedly stored there.

The deceased were apparently trampled to death or died of suffocation, according to eyewitnesses.

The authorities declined to confirm the deaths but government re-imposed a 24-hour curfew and denied hoarding any palliatives.

Governor Simeon Lalong in a broadcast said the curfew was in response to the action of hoodlums who “ broke into the warehouses where palliatives delivered to the state by the Federal Ministry of Humanitarian Affairs, Disaster Management and Social Development last week were stored awaiting distribution and carted them away.”

The looting, according to him, has “spread to other facilities and is gradually degenerating, thereby threatening the peace and security of the state.”

“By this, security agencies are directed to enforce the curfew and ensure that all violators are arrested and prosecuted.

“I call on all citizens and stakeholders to continue to cooperate with government in ensuring the peace and progress of Plateau State.

In a separate statement, Information and Communication Commissioner Dan Manjang said the palliatives which government allegedly hoarded were “delivered to the state by the Federal Ministry of Humanitarian Affairs, Social Development and Disaster Management for distribution to beneficiaries in Plateau State.

“Unfortunately while the team from the Federal Ministry of Humanitarian Affairs, Social Development and Disaster Management alongside the state representatives were waiting for the coast to clear to commence the distribution, the stores were breached and the items carted away.

“The Plateau State Government therefore wishes to state categorically that it did not hoard any palliatives meant for the citizens of the state at any time.

“All the palliatives purchased by the state and those donated by private individuals were distributed equitably by the State Palliative Committee headed by His Excellency Prof. Sonni Tyoden, Deputy Governor of Plateau State.”