Home Security ‘My twin brother, who tried to save soldiers in Oyigbo, has been in military detention for 14 days’

‘My twin brother, who tried to save soldiers in Oyigbo, has been in military detention for 14 days’ 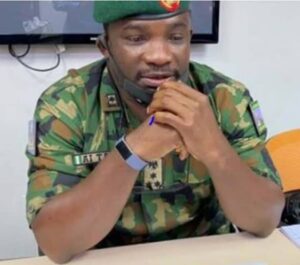 Nationnewslead reports that Onyema Ononiwu has voiced out his frustration following the continuous detention of his twin brother, Samson, who tried unsuccessfully to save two soldiers from murderous hoodlums identified as members of the disbanded Indigenous Peoples of Biafra (IPOB) in Oyigbo Local Government Area, Rivers State.

Onyema said at the weekend that the Nigerian Army has been holding his brother in military confinement for about 14 days and begged the army to grant his brother freedom.

During the bloodletting that culminated in the killings of six soldiers and four policemen in Oyigbo, Samson was said to have tried in vain to save two of the slain soldiers, who ran into his apartment.

Onyema had earlier told The Nation how the helpless soldiers scaled the fence of No. 15 Charles Ibe Street and ran into the apartment of his brother.

He said his brother, who grew up in the northern part of the country, received them, gave them his clothes to change their military uniform, and assured them of their safety.

But he said: “Unfortunately, those hoodlums started encircling the building. Is like they had something I can’t explain that told them, the soldiers were in that house. They refused to go away and from inside the room, my brother could hear them saying the soldiers were in his room. They broke into the apartment.

“In the process, they used the axe to give my brother a deep cut on his head. They wanted to cut off his head but one of them said he was not the soldier. In the process, he ran away. But those soldiers were not lucky enough. They brought them out, kill them, and took away their rifles.

“They came back, brought out all the property of my brother including his occupational tools and burnt them. They did not spare anything because they referred to my twin brother as a saboteur.”

Onyema, who said his brother is mentally challenged, said shortly after the Nation published his brother’s report, one Maj. Modozie, the army officer leading investigations into the Oyigbo incident, requested to see my brother.

“I took him there myself. I have always tried to protect my brother and most times speak for him because he is mentally challenged. Modozie wanted my brother to help them with their investigations. He promised to let him go a day after. But this is about 14 days and my brother is still there”.

Onyema said the only thing Modozie said was that the army was angry that he spoke to the media about the incident.

Onyema lamented that after detaining his brother in a makeshift facility at Oyigbo, the army had transferred him to Bori Camp for further detention.

He said the army arrested and detained his sister, Mrs. Nkechi Isreal, went to where Samson was being detained in Oyigbo, and requested they should release him.

He said that Modozie ordered that her sister, a married woman, should not be allowed to go home on the day she went to Oyigbo to demand Samson’s freedom, adding that the woman was released five hours later.

Onyema said: “I really don’t understand what is going on. They are saying that my brother knows the people, who forcefully took those soldiers out of his apartment, and killed them. But my brother had told them he could not identify any of those murderers. Yet they are still detaining him.
“My brother has been in shock since that time. He cried bitterly at the killing of those soldiers. My brother grew up in the north and it didn’t take him time to bond with the soldiers because they were from the north.

“It is painful that he lost everything he had worked for all his life but more painful that those soldiers he tried to save were later killed by the hoodlums.

When contacted, the Spokesperson of 6 Divison, Nigerian Army, Maj. Charles Ekeocha said he would not like to comment on the matter.

Spread the love
Previous PostStrike: ASUU begins consultation with members Next PostWole Olanipekun In The Eye Of History