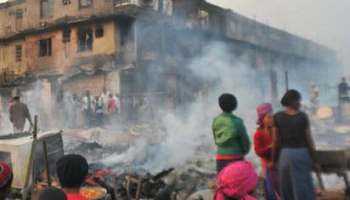 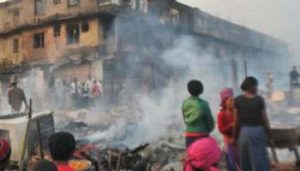 Nationnewslead reports that No fewer than 18 buildings and property worth millions of Naira were on Friday razed in a mysterious fire outbreak at Akwete community in Alan Akpa ward of Otukpo Local Government Area, LGA, of Benue state.

The disaster which also left several families homeless and in dire need of support and assistance razed several food barns and farms in the community.

Saturday Vanguard gathered from an eyewitness that the fire which started Thursday morning was reportedly ignited by unknown persons who set grasses on fire in the community probably to catch grasscutters.

“We do not know the people who ignited the fire but they probably set fire on the bushes in order to catch grasscutters because this is the season but the fire went out of control and they ran away.

“Over 18 houses and thatch huts were affected in the disaster including farmlands and food barns.

“As we speak several families have been rendered homeless and in dire need of assistance because most of the victims lost their houses and other valuables,” he said.

Meanwhile, the Chairman of Otukpo LGA, Mr. judge Alli who was among the first callers to the community described the disaster as unfortunate.

The Chairman who was accompanied to the community by the Counselor representing Alan Ward in the Otukpo Legislative Assembly, Mr. James Akpala, said, “I heard about this unfortunate incident this morning and was greatly disturbed.

“I came here to see things for myself and sympathize with those affected by this unfortunate incident which destroyed your property and valuables in this very difficult time. This type of thing shouldnt happen to anybody”.

Mr. Alli advised that people always take precautionary steps to avoid future fire outbreaks and disasters by clearing their surroundings of all combustible materials that could speed up fire outbreaks during this harmattan season.

Some of the victims, including Mr. Joseph Ogah and the chairman of the community development committee, Mr. Sunday Igbor, whose houses were also affected, commended the Council Chairman for his prompt response and appealed to the government and public-spirited individuals to come to the aid of the victims.