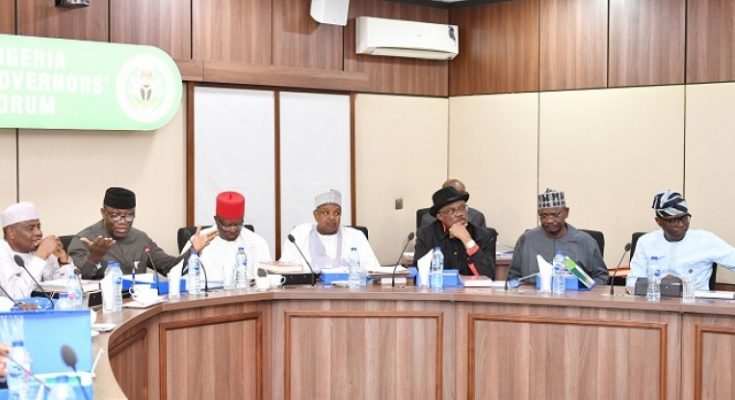 By admin3 weeks ago0 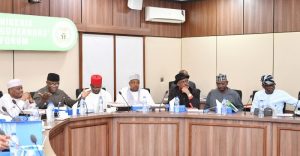 Governors of the thirty- six states of the federation under the aegis of the Nigeria Governors’ Forum, NGF are at the moment engaged in a marathon meeting at the State House, Presidential Villa, Abuja.

Top on the agenda are issues of security where Nigeria as a country is experiencing renewed cases of armed banditry, kidnapping, killings,  wanton destruction of property, among others.

Also on the agenda to be discussed by the governors is the Executive Order by President Muhammadu Buhari for the implementation of financial autonomy for state Legislature and Judiciary.

Recall that on Monday in Sokoto, the  Attorney-General of the Federation and Minister of Justice, Abubakar Malami, SAN  had said that the Federal Government was determined to push through the content of EO 10. “No going back”.

But the governors had on Tuesday said that while they are not against the implementation of the law on financial autonomy, they will not be stampeded by the Order. Also to be discussed is the issue of the Judicial Staff Union of Nigeria (JUSUN) over the ongoing strike which had paralysed activities in courts across the country.

The union had on April 6 embarked on a nationwide strike to protest the non-implementation of the financial autonomy of the nation’s judiciary.

The union directed all its members across the federation to shut down all courts after the expiration of the 21-day ultimatum earlier given over the failure of the government to implement the financial autonomy of the judiciary.

Speaking with Journalists on Tuesday, the Plateau State governor, Simon Lalong who emphasised that the NGF was not comfortable with Executive Order 10, noted that autonomy was not entirely about money, but putting necessary measures to strengthen the other two arms of government at the state level.

At the time of this report, 16 governors and four deputy governors were in attendance.