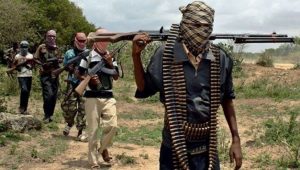 The doctor and the nurse abducted last week Wednesday by gunmen on the Abeokuta-Imeko road have been released on Monday night.

Also, a 13-year-old boy who was kidnapped on Saturday in Obada-Oko has been released.

However, another doctor was abducted the same Monday night that the two health workers were released.

The former Chairman of the Nigerian Medical Association in Ogun State, Dr. Adewunmi Alayaki, confirmed the release of the doctor and the nurse.

Alayaki, who said he served as the Chief negotiator with the kidnappers, identified the captors as Fulani herdsmen.

Alayaki was seen posing in a photograph with the victims and when asked about the genuineness of the photograph, he confirmed it.

He said, “This is not photoshop. That is how we did it last night. They have been released. We will soon call a press conference. I was the Chief negotiator to those people.”

Meanwhile, the doctor, whose identity could not be ascertained as of the time of filing this report, is a Dental therapist in the state hospital.

He was said to have been abducted while on his way to work on Monday evening in Ijebu-Igbo, Ijebu-North Local Government Area of the state.

On Gbolahan’s release, our correspondent gathered that the victim was released after ransom was allegedly paid.

But, the amount could not be immediately confirmed by our correspondent.

The Chairman of Destiny Estate Community Development Association, Tayo Bilesanmi, confirmed the release of the boy.

The Police Public Relations Officer in the state, Abimbola Oyeyemi, said he was yet to be briefed about the latest development.