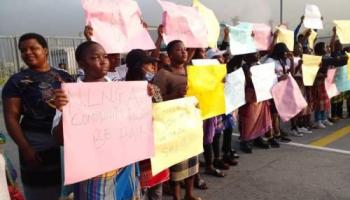 One feared dead, many injured as protest turns violent 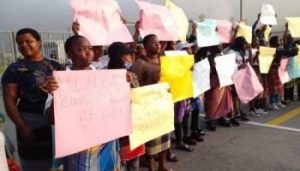 One person was feared killed while many others were injured in a violent that erupted during a peaceful protest by indigenes of Finima in Bonny Local Government Area of Rivers State, Thursday.

Youths of the community had called for a peaceful protest to drive home their quest for hosting rights in accordance with the Nigerians Local content Act of 2010.

However, the idea of asking for hosting rights may not have gone down well with some persons in the area, probably other communities that share the hosting rights with them.

Women dressed in red plain George wrappers and white polo T-shirts were seen dancing outside a big gate, suspected to be the main entrance to NLNG Company, creating a huge blockade on the gate, so much so that no one comes in or leaves the company.

A source close to the community told Journalists in Port Harcourt that trouble started when they got wind of the news that a youth of the protesting Finima community had been killed and his body taken away to an unknown destination.

Finima people in retaliation left the protest to fight their Bonny neighbours who they suspected to have carried out the killing.

But the community was allegedly battle-ready and mobilised to fight back.

Many people reportedly sustained varying degrees of injuries in the process and were hospitalised.

Properties, shops were said to be destroyed and businesses looted, residents scampered to safety as a situation in the area was tense.

Confirming the development in a statement the NLNG General Manager, External Relations and Sustainable Development, Eyono Fatayi-Williams said, “We can confirm an ongoing disagreement between two groups on Bonny Island, which has led to protests and blockade of some major routes.

“NLNG wishes to state that as a good corporate citizen, it applies the principle of fairness and inclusiveness in engaging with its esteemed stakeholders.

“The Company has always considered all stakeholders in the community as trusted partners and continues to maintain this position.

“NLNG remains fully committed to sustainable development in the kingdom, hinged on active community participation to drive initiatives and projects that positively impact the lives of the community.”

Meanwhile, the Nation learnt the company has urged its workers to go back home and continue the work until normalcy returns to the communities.

Reacting to the development, a Community Leader, Dagogo Lambert Brown, said they want the gas multinational to be addressed and recognised as NLNG Finima in Bonny Island and not just NLNG Bonny.

He however called for calm and urged all protests and fights to stop.

However, Police in the state could not confirm the report at the time of filing this report..

When contacted, the command’s spokesman, Nnamdi Omoni said he was not on his seat immediately and urged our reporter to call back.