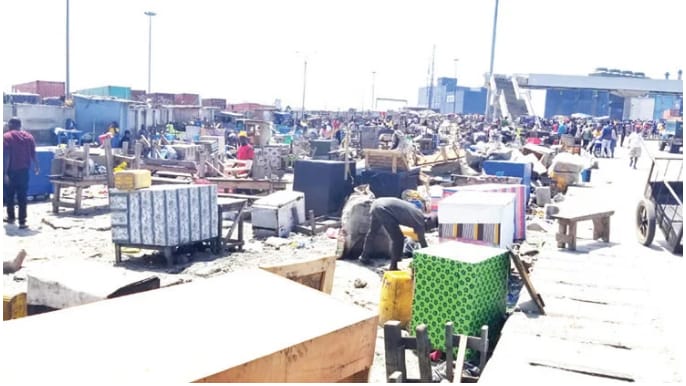 Residents and traders in the Second Gate area of Tincan Port, along the Apapa Expressway, Lagos State, have been living in fear due to ongoing clashes between factional members of the Maritime Workers Union of Nigeria, which have left scores of people injured.

Guns, cutlasses and other weapons were reportedly freely deployed by the groups during the fight, which started last Friday.

Our correspondent, who visited the area on Monday, gathered that the warring factions were led by two members, identified simply as Tao and Kunle.

Nationnewslead learnt that Tao, who was in charge of taking money from cargos operating outside the Second Gate area of the port, brought Kunle to assist him in the operation.

After a while, Tao reportedly discovered that Kunle was taking from the money, and consequently disengaged him.

Kunle was said to have formed an alliance with a market leader to tackle Tao’s operation around the base.

Our correspondent was told that the development resulted in a clash between the two groups.

ALSO READ:  Why I apologised to my lesbian daughter, by Charly Boy

He said, “The clash is between Tao and Kunle. Before now, they usually made money from any cargo operation outside the port. After their disagreement, Tao stopped Kunle from working because he (Kunle) betrayed him.

“So, Kunle formed another group and revolted against Tao. What we gathered on Friday was that Kunle and his cohorts attacked Tao, but he escaped and went ahead to mobilise external people to attack Kunle and his members.

“Everybody in and around the market were unaware of the looming crisis when Tao’s people suddenly brought in guns, cutlasses and other weapons. On Friday around 2pm, they started attacking everybody around the Second Gate area, including traders inside the market.

“They also fought on Saturday around 7am till 4pm and on Sunday around 4am. Everywhere was tense and a lot of people sustained bullet wounds. Some victims were rushed to the Apapa General Hospital for treatment after getting a police report at the First Gate Tincan Police Station. I learnt that some people were killed. I also know that over 16 people have been arrested.”

NNL observed as traders in the Anumorigba Market lamented their losses.

Vandalised makeshift shops were seen by our correspondent, as broken bottles littered the Second Gate area of the port.

A trader, Nike Bayo, said hoodlums took advantage of the crisis to loot goods belonging to traders in the market.

“The market women know nothing about the clash; we were doing our business when they suddenly started fighting and used that opportunity to steal our goods.

“A lot of us are widows, using our trade to feed ourselves. But they have stolen our goods and we don’t know where to start from. We want the government to intervene and assist us,” she said.

A motorcyclist, who asked not to be identified, said the union members were fighting because of the money made outside the port.

He said, “It was when the police came that things became calm. On Saturday, blood was all over the Second Gate area, but people came to clear the bottles and rain also washed the blood on the road.”

The state Police Public Relations Officer, CSP Muyiwa Adejobi, said no fewer than 18 suspects were arrested, adding that normalcy had been restored in the area.

He said, “The incident took place between Tincan Port First and Second Gates. The command swung into action; 18 suspects were arrested with weapons and were handed over to the Police Port Command. We have restored normalcy to the area, while police patrol continues.”