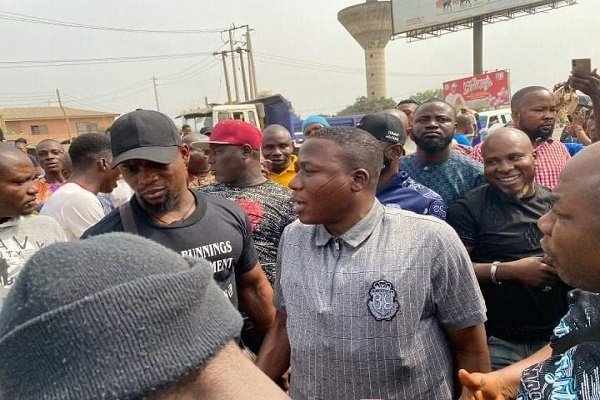 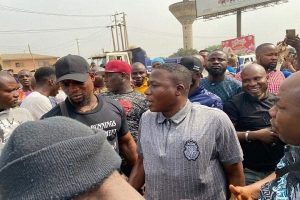 Facts have emerged on how Yoruba nation activist, Sunday Adeyemo, also known as Sunday Igboho, initially escaped arrest at the Cadjèhoun Airport in Cotonou, Benin Republic before his eventual arrest around 8pm on Monday.

A top security source told The PUNCH that Igboho and his wife, Ropo, at first, escaped arrest but a travel agent was used to lure them back to the airport.

The source said, “He (Igboho) was arrested in Cotonou on Monday night while he tried to travel. He was already at the airport with a passport. The immigration officers suspected the passport and so they stopped him. In the process, they discovered he was the one. He was able to escape in the course of discussion and we were grateful to God for that.

“But the travel agent called back saying the matter had been resolved. But on going back, he was arrested. He was trying to travel to Germany when he was apprehended.”

Also, another security source present in Cotonou told The PUNCH that Nigeria’s Ambassador to the Benin Republic, Lt. Gen. Tukur Buratai (retd.), was instrumental in the arrest of Igboho and his wife.

The source confided in The PUNCH that the former Chief of Army Staff wrote the government of the small West African country and insisted on the arrest and extradition of Igboho.

Buratai, Nigeria’s Chief of Army Staff between July 2015 and January 2021, was deployed as Nigeria’s envoy in the Benin Republic in June 2021.

Before then, the President, Major General Muhammadu Buhari (retd.), had presented Buratai’s nomination to the Senate and the upper chamber of the National Assembly had confirmed the ex-COAS’ nomination despite public outcry of some crimes against humanity allegedly committed by the Nigerian Army under Buratai’s leadership.

The top security source in Benin Republic, who spoke to our correspondent, said that Buratai through the Nigerian Embassy in the small West African country, sent a secret letter to the Benin government to be on the lookout for Igboho.

The PUNCH gathered that the letter was instrumental to the arrest of Igboho and his wife, Ropo, at the Cadjèhoun Airport in Cotonou, the largest city in the French-speaking country.

Benin Republic is bordered by Togo to the west, Burkina Faso to the north-west, Niger Republic to the north-east, the Atlantic Ocean to the south and Nigeria to the east. Benin Republic shares a boundary with Oyo State in South-West Nigeria, where Igboho was based before the Nigerian Government through its Department of State Services raided his Soka residence in Ibadan, the Oyo State capital on July 1, 2021 around 1am.

Though Igboho, an arrowhead in the separatist agitation for Yoruba Nation, narrowly escaped the bloody raid, about 12 of his associates were arrested and two others killed by the Nigerian secret police. Later, the DSS spokesman, Peter Afunanya, at a press briefing in Abuja, Nigeria’s capital city, on July 1, 2021, paraded Igboho’s associates and detained them thereafter, denying them access to their lawyers and not charging them to court.

The DSS also paraded some passports, AK-47 rifles, rounds of ammunition, African bulletproof vests, amongst others as exhibits. The secret police claimed that the items were recovered from Igboho’s house during the bloody raid. It also declared Igboho wanted for allegedly stockpiling arms which he claimed the activist wanted to use to destabilise Nigeria under the guise of Yoruba Nation agitation. Igboho denied the allegations and went into hiding.

ALSO READ:  Top facts about Ifa religion in Yorubaland you should know

Many Nigerians had condemned the Gestapo raid of the activist house and the treatment of the Federal Government of Nigeria on the matter but Presidential spokesman, Garba Shehu, had commended the DSS for the raid of the house of Igboho whom he labelled as “a militant ethnic secessionist, who has also been conducting acts of terror and disturbing the peace under the guise of protecting fellow ‘kinsmen’.”

While in hiding, the Federal Government of Nigeria placed the Nigeria Immigration Service and the Nigeria Customs Service on alert to stop Igboho from leaving the country.

It was gathered that the government beefed up security at Iwajowa, Saki West and Ibarapa local government areas of Oyo State which were adjoining areas to the Benin Republic.

Igboho, who rose to prominence in January 2021 after he issued an ultimatum to ‘killer herders’ in parts of Ibarapaland, was said to have escaped the security apparatus in the areas to Benin Republic where he was scheduled to catch a flight to Germany.

According to a top source familiar with the matter, the Nigerian government foresaw the possibility of Igboho flying to Europe through Benin Republic and planted a landmine for him there through Buratai.

The source said after Igboho was eventually arrested, “A lot of people made effort to resolve the matter but we discovered that the Nigerian Ambassador to Benin Republic (Tukur Buratai) was already aware and he said that he (Igboho) must be extradited.”

Another security source present in Benin Republic also told The PUNCH that the International Criminal Police Organisation, at the behest of the Nigerian Government, arrested Igboho and his wife at the airport saying the activist was a ‘wanted man’.

The source said, “Interpol at the airport came and arrested him saying he was wanted in Nigeria. He was together with his wife.”

The source added said Igboho and his wife had been detained in “Benin Republic Criminal Police cell”, adding that “Buratai should have gone to the police station because he was the one that told them to arrest him.”

The source said though the German Embassy was intervening in the matter because Igboho’s wife is a German citizen, the Nigerian Government could have its way and extradite Igboho today (Wednesday).

“I was told they are coming tomorrow. My prayer is that he should remain in Cotonou or be allowed to go to Germany because I don’t know what would happen to him in Abuja,” the source said.