Home Update OSUN: ‘Do Not Believe The Rumour’-Says Oyetola (I) – Isaac Olusesi 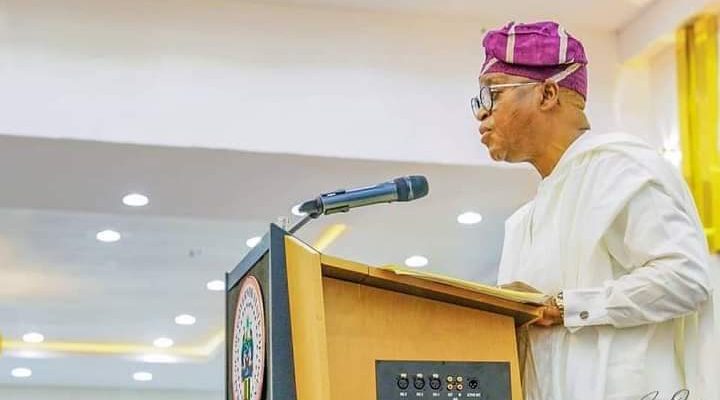 OSUN: ‘Do Not Believe The Rumour’-Says Oyetola (I) – Isaac Olusesi 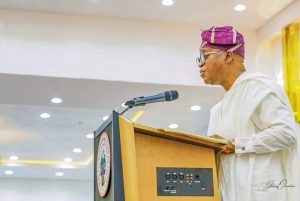 Albeit, the event, its leadership was entirely a National Union of Local Government Employees (NULGE) affair, I get drawn characteristically to public issues, opinions on their non-intuitive values and germane exigencies as prompted, in the instance, by Comrade Jacob Adekomi’s alert, asking the State of Osun labour force “to shun insinuations that the governor would go back to half salary after returning to second term_ .”

And Distinguished Adekomi is no mean a player in labour politics; he’s the Nigeria Labour Congress (NLC) state chief. His charge recently, at the second endorsement of Oyetola for next governorship, this time by the newly elected NULGE Executives, with other councils workers, and the state Trade Union Congress (TUC), Joint Negotiation Council (JNC) also in attendance, courted my attention even more as Oyetola firmly enjoined the state workers, “ …do not believe the rumour that I am paying full salary because of second term_ ,” professing succinctly,  “…I will not renege on paying full salary in my second term by the Grace of God_ .” He urged the labour force, _“Have no doubt in your mind that the welfare of workers remain my priority .”

The foul of the unbridle rumour is such a disagreeable thing in public image analysis and particularly, in the laudable task of sustaining the good image of the state governing All Progressives Congress (APC)-Oyetola as the rumour, a tempest, storm in a teapot split its tumults, with the speed, akin to the spindles of the Christmas master light valves, intent for transmission to the behavior of the Osun masses, to affect the electoral functioning of the Osun people against government.

The Osun opposition political elements, the architect of the rumour have staked a handful of state workers, the mainsprings of public opinion influence, capable of conformity like the reaction of motorists, negotiating a traffic signal, and are made rumour transmitters to make the subversive rumour look structured and meaningful as crystalized expression.

Whereas, the rumour, its hybridism, has its dire renaissance in the griping fear, self inputted in the opposition political elements, count down to the next governorship election in the state, with the less than cursory state workers, just a handful, submitting to the rumour inventors’ whims and caprices, irrational or erratic, which ever applies? Both do, like in a Mafia Connect, on acute rage, apparently against the APC–Oyetola government in Osun.

The arrowheads of the sardonic, virulent rumour, correspondingly, the eggheads of opposition elements in the state, with the rumour, its Necessitous scheme of notorious lies on the maintainability of full salary payment to state workers, to heat up the polity, encapsulate the oppositions’ ecstatic quest to invade and seize the occupation of the state seat of power, the Bole Ige House, Osogbo, state capital, from APC-Oyetola, in a seizure, not too unfamiliar with the People’s Democratic Party (PDP) in a manifest, too disdainful for electoral sanity or orderliness.

The rumour on the defensibility of full salary payment to Osun labour, come the Oyetola second term in office conveys the opposition PDP infamy. Too absurd. And the Osun workers, the generality of the state electorate must not foolhardy share any dogged obsession with the rumour.

Rather, the Osun voters should see the rumour millers as ever prepared to have the Fulani cow-stick laid across the back in the George Orwell’s characterisation in Animal Farm , to cause electoral banditry in Osun. Two, Osun voters should see the rumour vendors as emergent liars, prospecting burning lies about the justifiability of full salary payment to state workers after now, with the rumour inventors and vendors, lying exigently, the Bonnie and Clyde way- the treacherous, murderous couple that once ruled the American underworld, ever lying to cover each robbery track.

Three, Osun voters should see the rumour as opposition elements’ professional tool of political mass mobilization, orientation and sensitization for sympathy votes, solidarity votes, en masse, ahead of the governorship election in the state. And four, as corollary, Osun voters should see the rumours as the political oppositions’ dive to put a stamp of legality on illegality. Too bizarre, a crime.