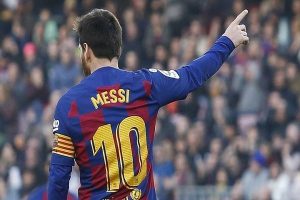 Lionel Messi will not be training with Barcelona until he signs a new contract at the Spanish club, according to reports.

The Argentine has been a free agent since July 1 but is still likely sign a new deal at the Catalan giants.

Despite an announcement that Messi would sign a five-year deal the contract has yet to be signed.
Due to Barcelona’s financial struggles, their captain has been forced to accept a pay cut in order to remain at the Nou Camp.

The deal which is yet to be signed will reportedly see him take a 50 per cent pay cut.
His previous contract expired on June 30 meaning that he has been a free agent since July 1 but he is unlikely to agree terms elsewhere.

However, Barcelona forward will not be training with his club until the new contract is signed, according to Spanish newspaper AS.

Messi posted a picture of himself sipping cocktails with Luis Suarez as reports emerged that he is ‘banned’ from Barcelona training.

The Argentine has been a free agent since July 1 but is expected to sign fresh terms on a new deal before the start of the La Liga season.

Reports last month indicated that Messi was prepared to take a 50 percent pay cut and sign a new five-year deal with Barcelona.

But with less than two weeks until the Catalan club get their campaign underway, the 34-year-old’s future is still up in the air – not that Messi seems particularly fazed by the whole affair.