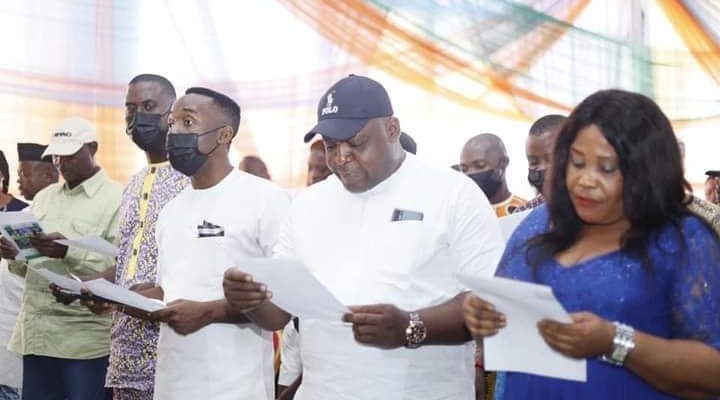 Chapter chairmen and executives of the All-Progressives Congress (APC) in Akwa Ibom State had been inaugurated with a charge to rise to the demands of their offices and advance the ideals of the party in their respective local government chapters.

Conducting the inauguration which took place at the Eseme Essien Event Centre in Uyo, the Organizing Secretary of the Care-taker Committee of APC in Akwa Ibom State, Hon. Aboh Uduyok said “few weeks ago, we were in the field to elect our party officers at the chapter level” and the inauguration and swearing-in of successful officers as followed is empowered by Article 33, sub-section 13 of the APC Constitution.

Hon. Uduyok said that the foundation which led to the congress, that resulted in the

emergence of the chapter executives, is in sync with the provisions of the Constitution of the APC, charging the just sworn-in chapter executive officers to rise to the demands of their offices and advance the ideals of the party in their respective local government chapters.

According to the Organising Secretary, “Politics and party administration is like building a house. If a good foundation is not laid and you lay blocks, a small wind may come and collapse all of them. I want to tell you that you are very lucky where you have found yourself today because the foundation has been properly laid. We called for Ward congress, all our contestants bought forms, and they have their bank tellers. That was the foundation that we laid. It is on that premise that we went ahead with the chapter congresses, through which all of you emerged. Therefore, be assured that a proper foundation has been laid and it is on that note that I perform this solemn duty of inaugurating people that have been found worthy to pilot the affairs of their Local Government Areas as party officers” Uduyok said.

On his own the Director General of Akwa Ibom Democratic Forum (ADF), Obongemem Ekperikpe Ekpo on behalf of ADF, congratulated the newly sworn-in party executive officers, and commended Hon. Uduyok for standing firm to entrench democratic ideals in the party.

ALSO READ:  Nigeria in trouble, security architecture of no use — South-West, South-South govs

Ekpo said with the inauguration of the new chapter executive officers, APC in the State has received a fresh spirit to advance the cause of the party in their various chapters.

The Director General of ADF, commended the leadership of the party at the National Level, and the leader of APC in Akwa Ibom State, Senator Godswill Akpabio and charged the new party chapter executives to emulate the virtues of their leaders by reuniting members of the party.

Speaking on behalf of the newly sworn-in chapter executives, the Chapter Chairman of Ibesikpo Asutan, Mr. Nsikak Ukim thanked the leadership and other party members for electing them to pilot the affairs of APC at the local government level. He assured that they would not fail in their responsibilities as chapter officers of the party but would work to ensure the success of APC in Akwa Ibom State come 2023.