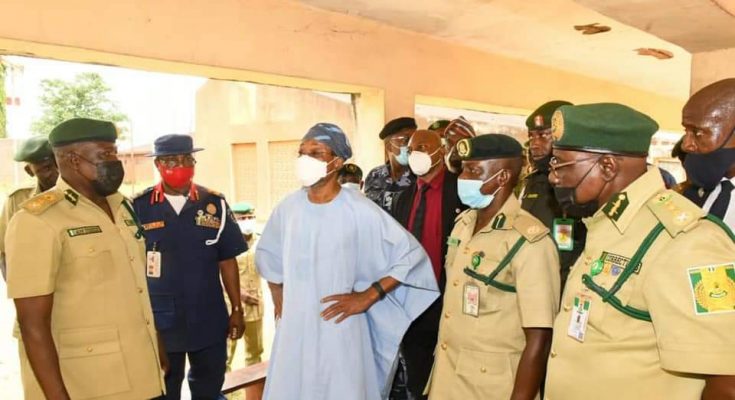 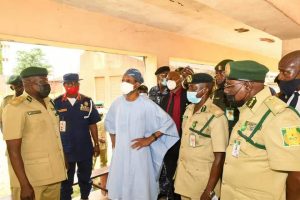 The Minister of Interior, Ogbeni Rauf Aregbesola, Sunday, vowed to pursue and recapture all inmates who escaped from the Abolongo Custodial Centre of the Nigeria Correctional Service, NCoS, on Friday night during a vicious attack on the facility by yet to be identified gunmen.

The minister gave the assurance, while making an inspection visit to the facility in Oyo, Oyo State.

He said: “The spate of attacks on our custodial facilities, the last of which occurred here on Friday night calls for serious concern, first in our society and secondly on your professionalism. This is unacceptable and we are saying enough is enough.”

“I’m assuring Nigerians that the Federal Government will pursue not just those who attacked our facility, but those who have escaped lawful custody.”

“The attack was unconscionable, I commend officers of the Nigeria Correctional Service and other members of sister security agencies who provided perimeter security for our facility for fighting gallantly and holding the fort before the attackers were able to gain access to the awaiting trial section of the facility, however, those who escaped are already being pursued. Some have been rearrested, many more will still be captured,” the minister stated.

Giving more details about those who escaped, Ogbeni Rauf Aregbesola noted that, 446 out of 907 escapees have been recaptured, whilst 69 never left the facility.

“As at the last count, 446 of the escapees have been recaptured leaving 392 still at large. We want to assure Nigerians that the service have an updated database of the escapees which includes their biometrics.”

ALSO READ:  History Of Owaloko Crown Of Iloko Ijesa (A Must Read)

“We are sharing the database with all security agencies in the country including the interpol, so those who escape our recapture efforts can be nabbed.

“To those on the run, be assured you have nowhere to hide. You can run, but you can’t hide. We’ll fish you out! We are publishing details of those we escaped in the mass media so the public can assist in that effort.”

“This matter is being investigated and we shall leave no stone unturned to get to the root of the matter – the remote and immediate causes and the vulnerability of our system and personnel, if any.’

“There shall not be a repeat of our guards being overwhelmed again. This is an anomaly that should never repeat itself.”

“We are going after every single inmate that escaped from custody. We shall hunt them to the ends of the earth. All the security agencies in the country are on their trail. We shall not rest or tire until we bring the last one in, dead or alive.”

“I will need to add that it is a criminal offence, punishable by a jail term, to offer any assistance whatsoever, not even giving a cup of water, to any inmate that escaped from lawful custody. You cannot help them in any way, absolutely, by way of cash, food, clothing, medical care, employment, road direction and any form of help, other than to encourage them to turn themselves in, and report their sighting to law enforcement.”

“The Federal Government, however, out of magnanimity, is giving them a small window to voluntarily turn themselves in, for which they will be pardoned for escaping from custody, but not for the offence the have committed,” the minister reiterated.

On the effort to rebuild the damaged part of the facility, the minister noted that he has directed the NCoS, to immediately begin remediation work.

“I have instructed the CG of NCoS to immediately begin the reconstruction of the damaged parts of the building. We hope to make the facility better secured and more habitable for the inmates.”

Earlier, Governor ‘Seyi Makinde, also paid an inspection to the attacked centre, where he ordered immediate installation of security cameras in the facility and link same with the security situation room in the state and also granted the main road leading to the facility be immediately graded.

Speaking against the speculation that the arrested Fulani warlord, Iskilu Wakili and the suspected Akinyele serial killer, Sunday Shodipe were among the escapee inmates, Makinde said: “About the high-profile suspects here, people are very quick to start talking about conspiracy theories.”

“What I can say is that investigation is still on. Yes, there were high profile criminals that were held in this facility, but they are not the people they were carrying the rumour about.”

“Again, I will appeal that our people should be calm. We have challenges around the country – banditry, insurgency and terrorism. And we can only deal with those issues when we have the people in alignment with what the leadership is trying to do.”

“So, they should please believe that their leaders will tell them the exact situation of things at the appropriate time.”

Corroborating the stance of Makinde, the Deputy Controller-General, Operations of the Nigeria Correctional Service, NCoS, Tukur Muhammad Hamad, said: “I have been here since Saturday, when this happened and we are investigating. Very soon, the report of the investigation handed over to my Controller-General.”

“But I want to say this clearly that here, in the custodial centre, we don’t have any high-profile inmate, but the only person we have here is that person who has a case with EFCC and for your information, he is still with us here. He did not go to anywhere.”

“That is the situation on ground now. So, Iskilu Wakili and Sunday Shodipe are not here,” he said.