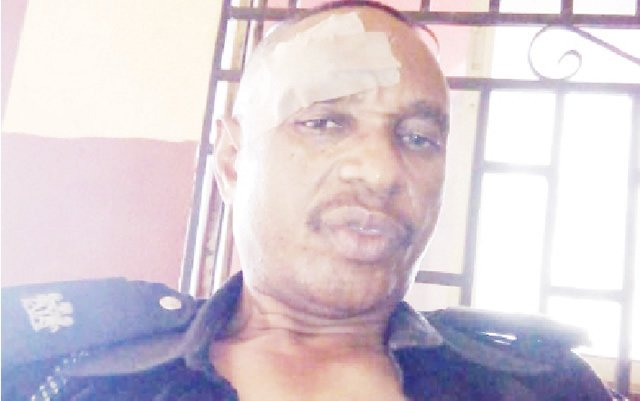 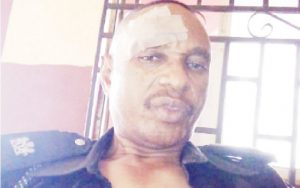 The DPO was drenched in blood after sustaining head injuries from the stones that hit his head during a clash between students of the two schools in Abeokuta, the state capital.

Our correspondent assembled that the DPO was attacked along with his men during a fight between students of Egba Comprehensive High School and Asero High School in the Asero area of the state.

It was learnt that the students had engaged one another in a bloody clash before men of the Obantoko Police Station were called to arrest the situation.

Nationnewslead assembled that the students, who hauled stones and other missiles at one another, blocked the main road, causing tension among residents.

Ignatius and some of his men, who reportedly raced to the scene of the incident to maintain law and order, were injured by the students.

Oyeyemi said, “The DPO was hit by stones. The students were throwing stones and other objects at one another during the fight.

“We cannot arrest the students because they are minors. We can only detain and counsel them, after which they will be released.”

Meanwhile, the state chapter of the Police Community Relations Committee has condemned the attack, describing it as “uncivilized and unwarranted.”

The state Chairman of the group, Samson Popoola, in a statement signed by his media aide, Babatunde Odeyemi, lamented the public disorder by secondary school students in the state.

“If this is not quickly checked, it may portend great danger for the future of this country,” he added.

Attempts to get the state Commissioner for Education, Science and Technology, Prof. Abayomi Arigbabu, to disclose what the government would do to the students that attacked the DPO failed.

He did not take his calls or reply to a text message sent to his telephone line as of the time of filing this report.