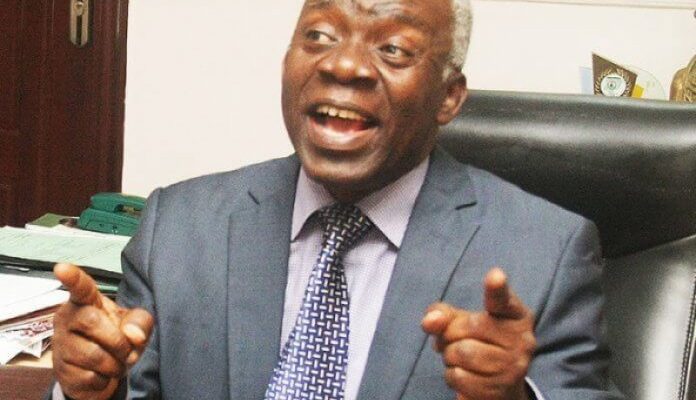 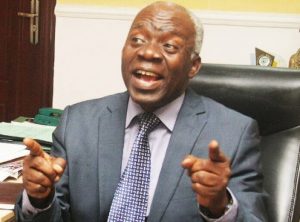 Human rights activist, Femi Falana (SAN), has slammed the Minister of Information, Lai Mohammed, for describing as fake news the report of the panel constituted by the Lagos State Government to investigate the Lekki massacre of protesters last year October.
He slammed the minister for overruling President Muhammadu Buhari’s pledge to the United States Secretary of State, Anthony Blinken, that his government would work on recommendations of the reports of the federating states.

Falana said these in a statement titled, ‘Federal Government Is Not Competent To Reject The Report Of Okuwobi Judicial Commission Of Inquiry.’
A copy of the statement was obtained by SaharaReporters on Wednesday.
It partly reads, “On November 18, 2021, President Muhammadu Buhari held a meeting in Abuja with Mr. Anthony Blinken, the United States Secretary of State. During the meeting, President Buhari said that the state governments in the country would have to take steps on the reports of their panels before the federal government acts on the recommendations.
“In particular, the President said, ‘We at the federal have to wait for the steps taken by the states, and we have to allow the system to work. We can’t impose ideas on them. The federal government has to wait for the reaction of the states.’
“But in an utter display of executive rascality, Mr. Lai Mohammed, the Minister of Information, has overruled the President by rejecting the report of the Lagos panel on behalf of the Federal Government.
“By not waiting ‘for the reaction of the states’, the minister has overruled the president of the republic. As if that was not enough, the minister decided to insult the Governor of Lagos State, Mr. Babajide Sanwoolu, by rejecting the report of the judicial commission instituted by him under the Tribunal of Enquiry Law of Lagos State.
“Thus, the governor, who is currently studying the report, has been presented with a fait accompli by the minister. As far as Mr. Mohammed is concerned, the governor must toe his line.”
The human rights lawyer described the minister as arrogant, despite being a lawyer himself to have called a report of judicial panel “fake news”.
Falana added, “Mr. Mohammed has described the 309-page report of a judicial tribunal as “fake news”. As a lawyer of many years’ standing, the minister ought to have known that it is the height of arrogant contempt to describe the report of a Judicial Commission of Enquiry constituted under the Tribunal of Enquiry Law as “fake”.
“It is regrettable to note that the minister has failed to realize that the Lagos State Government is not an extension of the Federal Government but a sovereign entity in the constitution of the Federal Republic of Nigeria. Since the name of the Federal Government is not clothed with any power under the Tribunal of Enquiry Law, the purported rejection of the report by the Minister ought to be treated with disdain by the Lagos State Government.
“In a press conference held on October 20, 2021, Mr. Mohammed had recalled that the National Economic Council had directed state governors to immediately forward copies of final reports of the panels to their attorneys-general for prompt arraignment and prosecution of all indicted persons. Where incidents in the reports relate to matters of discipline, in addition to prosecution, NEC urged the Nigeria Police Force to take disciplinary action on the affected officers in line with the provisions of the Police Act 2020.’ Has Mr. Mohammed overruled the collective decision of the National Economic Council?
“However, it is pertinent to point out that Mr. Mohammed’s comment on the report lacks originality as it is a mere regurgitation of the jaundiced views of a couple of aggrieved individuals.
“The two individuals, have tried, albeit unsuccessfully, to discredit the findings and recommendations of the body. In a desperate attempt to mislead the governor, both aggrieved persons have been campaigning for the total rejection of the report because of the so-called discrepancies and inconsistencies contained in the document.
“No doubt, these individuals are entitled to express their opinions on the report of the commission. But the call for the rejection of the report is illegal in every material.
“In December 2015, the Nigerian Army massacred hundreds of Shiites in Zaria and hurriedly buried their bodies in a mass grave at Mango in Kaduna State on the orders of the then Chief of Army Staff.
“Even though Mr. Mohammed said that the report of the genocidal attack was a hoax, the Justice Garba Judicial Commission of Enquiry instituted by the Kaduna State Government confirmed a casualty figure of 348 Shiites. Six years thereafter, the authorities have ignored the recommendation of the Judicial Commission that the culprits be prosecuted.
“The Lagos Judicial Commission of Enquiry accepted the evidence of forensic experts to the effect that 99 dead bodies were dumped in the various mortuaries in Lagos State during the protests. Mr. Mohammed has described the massacre as “fake news”.
“Finally, Mr. Mohammed’s callous comment on the cold murder of unarmed citizens at the Lekki Toll Gate is a sad reminder of his own experience under the same forces of brutalization.
“On August 8, 2014, Mr. Mohammed, the then Publicity Secretary of the APC had left Lagos for Osogbo, Osun State in support of Governor Rauf Aregbesola’s re-election bid. Later that night it was reported that he had been kidnapped by a team of hooded operatives of the State Security Service.
“I was aroused from my sleep by Governor Aregbesola who requested me to assist in searching for Mr. Mohammed. However, a couple of hours later, I was relieved when it was reported that he had regained his freedom.
“But the PDP dismissed the kidnap story as a hoax emanating from the fecund imagination of Mr. Mohammed. Having completely crossed to the other side of the political divide, Mr. Mohammed conveniently regards news of the tragic massacre of unarmed citizens as fake.
“Mr. Mohamned’s steps undermine the rule of law and social justice in the land. President Buhari should caution him.”