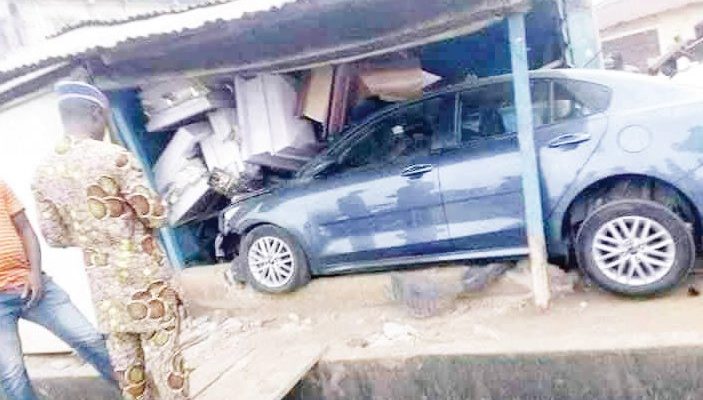 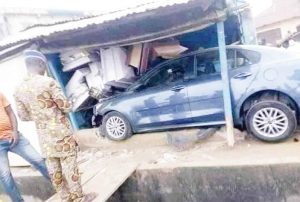 A yet-to-be-identified man and a woman suspected to be his wife, on Monday, escaped death by a whisker after ramming into two coffin shops around the Ikorodu General Hospital, in the Ikorodu Local Government Area of Lagos State.

Nationnewslead assembled that the man was driving along the T.O.S Benson Road, when a tricycle operator reportedly rode in his direction.

In a bid to avoid the impending collision, the man, who drove a blue KIA car, suddenly swerved and in the process veered off the road and rammed into the coffin shops around 7am.

An eyewitness, who gave her name only as Ife, said there was no casualty.

She, however, noted that the impact of the crash damaged the couple’s car and no fewer than nine coffins.

The trader said, “A tricycle operator saw passengers waiting for vehicles to convey them to Ebute and he rode in the direction of the motor park. Suddenly, he made a U-turn without properly looking at the road and wanted to collide with a KIA car heading towards the park.

“The shock of the incident made the driver of the KIA lose control of the vehicle and ram into two coffin shops. The driver’s wife was dressed for office and it appeared that the man wanted to drop her at work.

“The tricycle operator fled after realising what he had caused. Nobody sustained injuries, but the accident damaged the coffins and some parts of the shops belonging to Abayo and Korede.”

Another eyewitness, who identified himself as Jide, said the driver compensated the owners of the damaged coffins before taking the vehicle from the accident scene.

“When I got there, I saw that the husband and wife sustained no injury, but the shock of the accident affected the driver, as he spent up to 30 minutes in the car before getting down.

“They had to rush him to a hospital and later, he returned with his family to the coffin shops, settled the owner of the coffins with N550,000 and used a towing vehicle to remove his car from the scene of the accident.”

The state Police Public Relations Officer, CSP Adekunle Ajisebutu, promised to get back to our correspondent after being briefed about the incident.

He had yet to do so as of the time this report was filed.