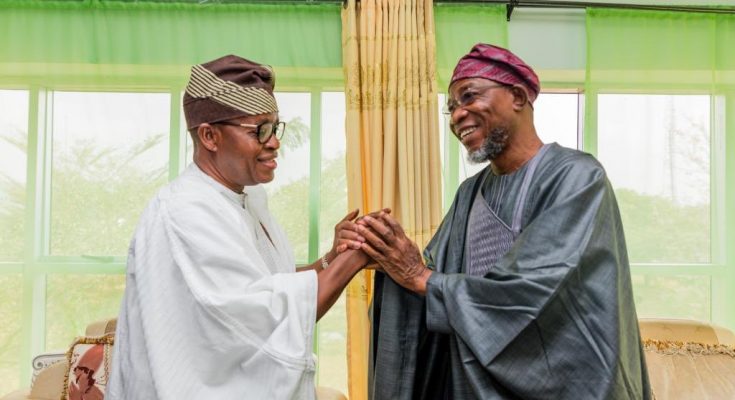 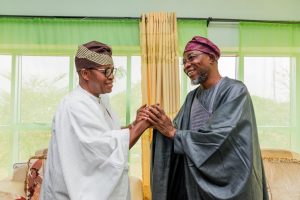 The National Reconciliation Com­mittee of the ruling All Progressives Congress (APC) will on Saturday visit Osun State where it is scheduled to meet with the state governor, Gboye­ga Oyetola, and his predecessor, Rauf Aregbesola, who is now the Minister of Interior.

A member of the reconciliation committee which is headed by Senator Abdullahi Adamu, a former governor of Nasarawa State, confirmed the de­velopment to Daily Independent.

According to him, invitations have been extended to both Oyetola and Aregbesola and the com­mittee is confident that both men will turn up for the meet­ing.

Aregbesola and Oyetola have been at loggerheads for undisclosed reasons since the start of Oyetola’s tenure in 2018.

The feud has spread to their supporters and split the party in the state into different fac­tions with members attacking one another on different occa­sions.

While the governor’s loy­alists under the aegis of ‘Ileri Oluwa’ have alleged that Areg­besola wants to assume the position of a godfather over the governor despite not sup­porting him as APC flagbearer, the minister’s loyalists who are operating under the banner of ‘The Osun Progressives’ (TOP) have claimed that Oyetola is rubbishing all the legacies put in place by Aregbesola in his eight years reign.

Two weeks ago, Aregbeso­la’s loyalists who claimed that they are in total control of the APC structure in the state vowed to unseat Oyetola in the forthcoming governorship elec­tion scheduled to take place on July 16, 2022.

The governor, however, said he is not losing sleep over their plans to stop his reelection bid.

The situation has also prompted the Osun State law­makers to seek the help of the General Overseer of the Re­deemed Christian Church of God, Pastor Enoch Adeboye, to help broker peace between the two political gladiators.

Speaking with Daily Inde­pendent, the APC reconciliation team member said they are confident that both Oyetola and Aregbesola will sheathe their sword at the end of the meeting.

“We are heading to Osun on Saturday where we hope to meet Governor Oyetola and Engr. Rauf Aregbesola. We are confident that a truce will be reached at the end of the meeting.

“We are going there in the name of the party leader, Pres­ident Muhammadu Buhari, and we believe they will respect that. Both men (Oyetola and Aregbesola) are also peacemak­ers and true progressives who want victory for our party in the forthcoming governorship election”, he said.

In a related development, the National Reconciliation Com­mittee of the APC in Abuja on Wednesday successfully rec­onciled Gombe State governor, Inuwa Yahaya, and his prede­cessor, Senator Danjuma Goje

The meeting between the two men was attended by the National Chairman of the APC Caretaker/Extraordinary Convention Planning Commit­tee and governor of Yobe State, Mai Mala Buni, and other par­ty bigwigs, including former speaker of the House of Rep­resentatives, Rt. Hon. Yakubu Dogara, senators and former governors, among others.

A statement by Ismaila Uba Misilli, Director-General (Press Affairs), Government House, Gombe, said, “The meeting was held at the residence of the former governor of Nasarawa State and Chairman of the APC Reconciliation Committee, Sen. Abdullahi Adamu.

“Both Governor Inuwa Ya­haya and Senator Danjuma Goje were given opportunity to present their respective positions on the seeming mis­understanding and conflict in the APC in Gombe State and a robust discussion was held with a view to unravelling what the problems are, and how best to proffer solutions and resolve the differences as well as cement all cracks with­in the party in the state ahead of the national convention and preparatory to the 2023 general elections.

“This meeting was a contin­uation of the earlier one held in Gombe when the Abdullahi Adamu-led committee inter­acted with Governor Muham­madu Inuwa Yahaya and other senior party stakeholders, with a view to addressing perceived grievances and disagreements arising from the recently con­cluded party congresses in the State.

“Although after that meet­ing in Gombe, Sen. Adamu told journalists that it became clear to his committee beyond any reasonable doubt, that Gombe State APC is intact and stronger under the leadership of Governor Muhammadu Inu­wa Yahaya, he however indicat­ed that they will leave no stone unturned to explore all ways of cementing all cracks, integrat­ing members and strengthen­ing the unity in the party”.