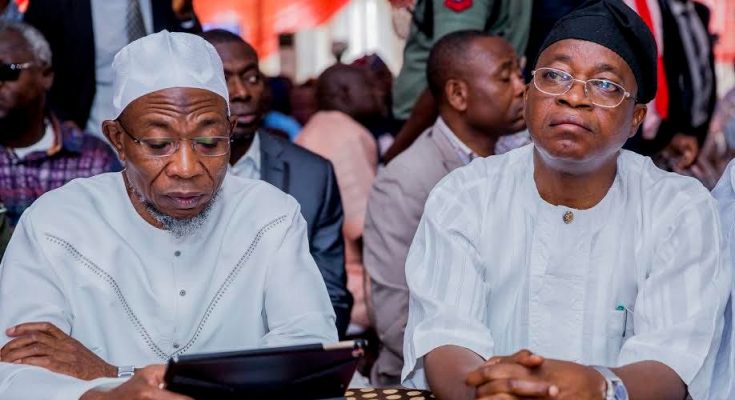 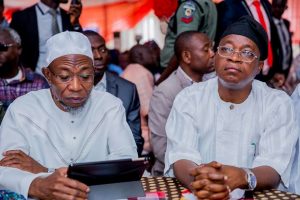 The Minister of Interior, Rauf Aregbesola, on Friday said the ruling All Progressives Congress in Osun State was divided, noting that at the right time, the party would be reorganised.

But in a quick reaction, the Special Adviser to Osun State Governor Adegboyega Oyetola on Political Affairs, Sunday Akere, refuted the claim, saying the Osun APC remained one and intact.

Aregbesola, who spoke during the inauguration of the Digital Nigeria Centre in Ijesa Muslim Grammar School, Ilesa, was alluding to the existence of The Osun Progressives, loyal to him, and another group, Ileri Oluwa,  loyal to the governor.

Speaking in Yoruba language, Aregbesola, acknowledged Rasaq Salinsile, who his faction elected as the chairman of the APC in the state.

The former governor said, “For anybody who seeks to know, the APC is divided in Osun. We have APC of Rauf Aregbesola, which is chaired by Honourable Razaq Salinsile, and the other.

“Everybody is doing his or her own, later, we will reorganise, we will rearrange everything.

“The caucus that produced our faction is called The Osun Progressives chaired by Elder Lowo Adebiyi. People who are in doubt, thinking whether I am part of the TOP or not should listen, I belong to TOP. I am happy that the Commissioner of Police is here. There are a lot of lies that are flying around.

“I managed the affairs of this state for eight years. When I was here, you can check our records, there were no breaches. We did the job with the whole of our mind and body.

“During the time, I was barely having two to three hours’ sleep every day. I did the job not only with my heart but also with the whole of my body.

“I cannot say now that the state should be having unrest. My parents are from here. If you security men will be fair, you will succeed.”

ALSO READ:  2023: Is Nigeria ready for a woman president? [opinion]

But speaking in a telephone interview with our correspondent, Akere said, “The APC in Osun is not divided. It remains one united family under the leadership of Prince Gboyega Famoodun and overall leadership of Governor Isiaka Oyetola.

“He (Aregbesola) possibly made that claim to divert attention from our allegation that members of TOP are hobnobbing with the opposition in the state.

“We want our national leadership to investigate the group to ascertain the veracity of our claims. The ruling party in Osun is not divided, as we remain one strong family.”

Meanwhile, Aregbesola said the Digital Nigeria Centre was designed to equip schoolteachers and pupils in secondary schools with 21st century IT skills.

He said, “The specific objectives of Digital Nigeria Centre include increasing ICT literacy among schoolteachers and students, providing a platform for accessing online educational resources, equipping students with ICT skills, facilitating ICT adoption in teaching and learning and ultimately to increase pass rate in mathematics, English language and other science subjects.”

ALSO READ:  ‘How bandits killed our husbands, made us widows’

The Minister of Communications and Digital Economy, Isa Pantami, who was represented by the Executive Vice Chairman, Nigeria Communication Commission, Prof. Adeolu Akande, said the centre would expose the younger generation to digital skills  to key into Federal Government’s digital economy drive.

Governor Oyetola, who was represented by Commissioner for Innovation, Science and Technology, Dr Babatunde Olawale, commended the Federal Government for siting the project in Osun State.

Oyetola said his administration would continue to focus on building a sustainable economy.