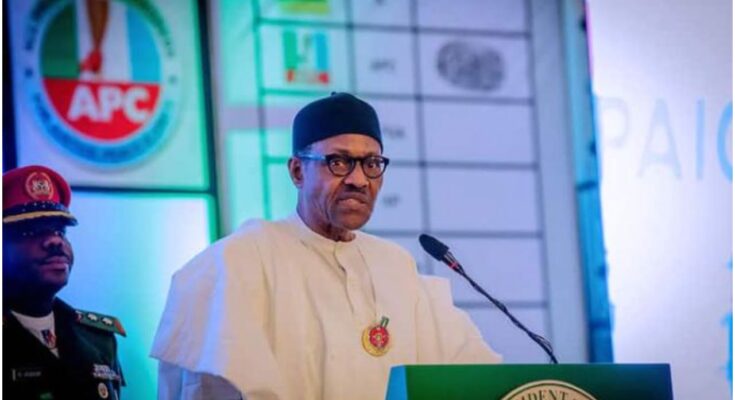 At a meeting held Sunday night at State House, Abuja, with members of the National Advisory Council of the All Progressives Congress (APC), President Muhammadu Buhari appraised the series of consultations held so far towards getting a widely acceptable presidential standard bearer, and concluded: we are on the way towards winning our third straight victory since 2015.

Saying the meeting was convened to provide leadership and direction during the transition period, the President added that the motive was “to strengthen our unity and to focus on building upon our electoral fortunes.”

He added: “I am optimistic that the outcome of this consultation with the National Advisory Council will in addition to sharpening our focus, help to fortify the positive democratic principles, practices and culture that already exists within the party system.

“In the course of these consultative processes, I have already met separately with the Progressive Governors and with all our eminent members who are aspiring to become the Presidential flag bearer for our party during the 2023 elections.

“I am pleased to inform you that those meetings have been fruitful and indicative of a party that is prepared and marching towards a third straight victory since 2015, at the presidential polls.”

President Buhari recalled that at the meeting with the Governors and the aspirants, “I underscored the important roles consensus building and consultation have played in the survival of successful political parties around the world, adding that our party should not be an exception.

“Recognizing the foregoing, therefore, I also emphasized the need to strengthen our unity, stabilize our internal cohesion and system as well as present a formidable Presidential candidate who has the ability to build a unified nation and the capacity to deal with our challenges.

“The party machinery has also screened all our aspirants to the office of the President and found that they consist of eminent personalities, rich in experience, capacity, commitment to service and accomplishment in life. This gives us a lot of confidence but it also comes with its challenges.”

He said that in the circumstances, in order to prevent any post-convention acrimonies and also reduce noticeable anxiety among members on the possible outcome of the process, the party leadership has recommended the intensification of consultation and consensus building to reduce the number of aspirants as it approaches the convention, which commences Monday , June 6, 2022.

The President said in order to further support the efforts of the party, he has admonished the aspirants to consult among themselves and with the party, so that the objective of the recommendation by the leadership would be actualized.

And as members of the National Advisory Council of the APC, the President says he recognizes the fact that they all have diverse interests, spheres of influence and expectations. “You similarly possess the collective ability to ensure our victory at the 2023 polls by strengthening the stability and unity of the party.

“My charge and appeal to all of you, therefore, is to reach out to your various spheres of influence to actively promote the spirit of consultation and consensus building so that a formidable candidate for the 2023 Presidential elections would emerge from the convention. Our citizens do not expect less from us.”

President Buhari assured, as he did to the Governors and the aspirants, that in the interest of the nation and the party, he would lead the transition processes and on-going consultations, “till we successfully choose our candidate for the 2023 presidential elections and record our third straight victory, thereafter, by God’s grace.”

Responding on behalf of the National Advisory Council (hitherto known as Board of Trustees) members, former Internal Affairs Minister and Senator, Major General Mohammed Magodo (retd), former Osun State Governor and first Interim National Chairman of the party, Chief Bisi Akande, and former Senate President, Chief Ken Nnamani, thanked the President for the consultative meetings, and commended him for the great service he had rendered to the country, particularly in the areas of agriculture and infrastructure.

They were unanimous that with hard work and a united front, the APC would win the presidential election billed for February next year, as well National Assembly, governorship, and State Assembly polls. Continue Reading