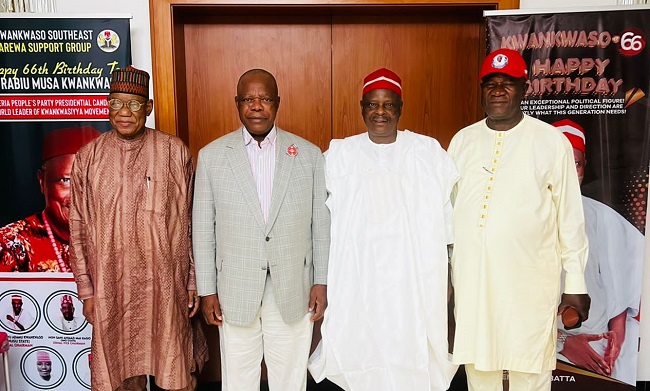 The presidential candidate of the New Nigeria People’s Party (NNPP), Senator Rabiu Musa Kwankwaso and his counterpart from the All Progressive Grand Alliance (APGA), Professor Peter Umeadi, have met to discuss the coming general elections in 2023 and a possible alliance between the two parties for the February 25 presidential election.

The meeting, which was held in Abuja on Monday, Nigerian Tribune learnt, centred on political consultations, permutations and possible alliances by the two political parties to displace the ruling All Progressive Congress (APC) from power next year.

The presidential candidates discussed and reviewed the political situation in the country and the need for the Independent National Electoral Commission (INEC) to conduct free, fair, credible, transparent, peaceful, inclusive and generally acceptable elections that will further deepen the nation’s emerging and fledgling democracy.

Nigerian Tribune recalls that the NNPP had last week denied any alliance with the Peoples Democratic Party (PDP) going into next year’s general elections.

Speaking with Nigerian Tribune in Abuja on Tuesday on a possible alliance with APGA, NNPP’s national publicity secretary, Dr Agbo Major, said his party is ready to go into alliance with any progressive parties that will make life more comfortable for Nigerians and release them from the shackles the APC government under President Muhammadu Buhari has subjected them to in the last seven and half years.

“Yes, we (NNPP and APGA) are two progressive parties and anything is possible. The only thing we know is not possible is we have insisted that we have nothing to do with APC and PDP. But with any other political party, we are good to go. But like I keep saying, whatever the arrangement that will likely come into play, we’ll see whoever is coming, queue behind our presidential candidate,” the NNPP spokesperson told Nigerian Tribune.

The NNPP presidential candidate has been meeting and consulting with national leaders, traditional and religious leaders, and eminent Nigerians with the promise to build a new Nigeria anchored on justice, equity, infrastructure, education, industrialization, security, prosperity and delivery of dividends of democracy which he said only NNPP can offer if voted into office next year as president.

“Our nationwide consultation continues as the party is poised to win the upcoming presidential election with the support of Nigerians and like-minded political parties. From every indication a new Nigeria is possible with NNPP,” Agbo Major added.

Previous PostReps adopt report on establishment of Cabotage Vessel Financing Fund Next Post2023: Nobody Can Threaten Me Over My Preferred Candidate - Obasanjo