Home Politics Apprehension in Benue over military operation in Nasarawa 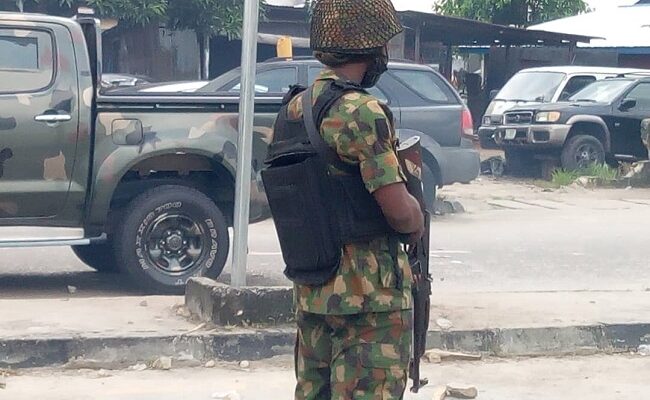 Apprehension in Benue over military operation in Nasarawa

Palpable fear gripped residents of Wadata, a suburb of Makurdi, Benue State capital as they woke up on Wednesday with gory sight of corpses allegedly killed in military operation in Nasarawa State.

Though a relative of one of the deceased who spoke to the Nigerian Tribune on the phone said that the victims of the operation were within Benue State.

Bello Abdusalam (a lawyer) who lost a cousin in the operation explained that 42 people were killed in the military operation that happened around 8:30 pm on Tuesday.

He said that Livestock Guards in the state had seized about 600 cows from different people and they were to pay the fine in Makurdi.

He added that on Tuesday the affected people had retrieved their cows and were at the verge of offloading when military jet bombed the people.

Abdusalam said, “The incident happened yesterday (Tuesday) night at about 8:30 pm at a settlement behind NASME they called the place Dakolo

“It was while they were offloading the cattle that fighter jet came down and dropped bomb on them killing 42 of them one of them was my cousin brother his name is Jaallat Danbata, 41 of the deacesed were fulanis.

Secretary of Miyeitti Allah Catle Breeders Association of Nigeria, MACBAN, Ibrahim Galma who spoke to newsmen also claimed that some of their members were killed by military when they had gone to offload their seized cattle retrieved from the state livestock guards.

Meanwhile the military which confirmed operation in Nasarawa Tuesday night said that those killed in the operation were terrorists.

A competent military source informed the Nigerian Tribune our that the operation was at the behest.of Chief of Defense Staff, General Lucky Iraboh who responded to series of correspondence from the Nasarawa State Governor, Abdullahi Sule.

“Following increasing killings, kidnappings and terrorism by the Darul Salam/Boko Haram elements running away from troops onslaught in the Northeast and Northwest parts of the country, a combined team of security agencies conducted operations into the heart of the terrorists enclaves in Nasarawa State on 24 January 2023 where they were observed from the air to be gathering for a meeting and possible attack.

The military source further said that the combined security operations were initiated around 30 December 2022 following the unwarranted attacks by the elements in Kadarko axis and the kidnapping of six primary school children in Doma all of Nasarawa State on 19 January 2023.

The source further explained that the terrorists had recently destroyed the wooden bridge over a stream leading to their hideouts in one of their forests to prevent troops from reaching their locations easily while they were digging military-like trenches to take cover.

Efforts to get the commander, Operation Whirl Stroke, Major General Kevin Aligbe were not successful.

He added that some politicians were saying it is me Ortom that caused the killing and that I was the one that sent soldiers to kill but it is not me. It was from defense headquarters against terrorists.