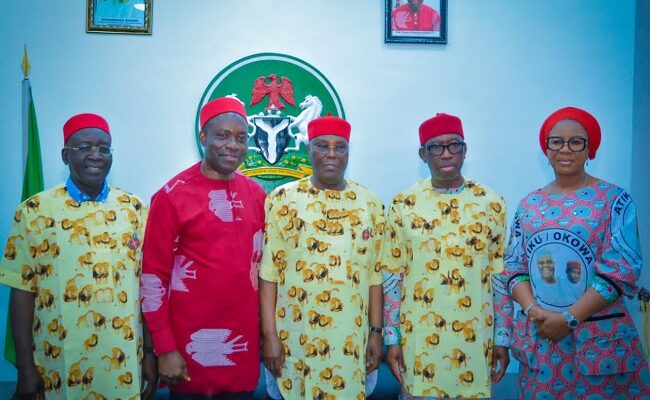 Speaking at the Governor’s Lodge Amawbia, Atiku maintained that the visit was to pay a courtesy call to Governor Soludo as the APGA Governor in Anambra State.

He said that his relationship with Soludo is beyond partisan politics but a commitment to undertake reforms in the Nigerian economy.

“This is beyond party politics. There should be a consensus on how we move forward and I consider Governor Soludo as a partner in that respect.

“It is my singular respect and honour for him to receive me in the state. In spite of our different political affiliations, there should be some core values we should agree to towards the development of our country.

“I thank Governor Soludo for going beyond party politics. He didn’t shut the gate against us. We are all partners in our reform agenda as far as Nigeria is concerned.

“The governor personally told me he was not available in the state but had to find a way back to receive me. I thank him for the opportunity and wish for God’s blessings upon his life and upon Anambra State,” Atiku prayed.

In his welcome speech, Governor Soludo said development of Nigeria should be the utmost priority for any politician or candidate.

“In this business of building Nigeria, Anambra and Igboland should be an open place for anyone.

“Just give us your proposition and tell us how you will fix the country.

“I am very glad you are here to canvass for votes and I believe our people will listen carefully to every word you have to tell them,” Governor Soludo said.

“Our orientation is to have a level playing field for everyone.

“Politics is about development and we want the South East to feel this development,” Soludo noted.

“Reconciliation and reconstruction is what we haven’t come to terms with.

“The federal highways constructed in the Shagari era are no longer motorable. My administration is already spending few billion on federal roads.

“The bottom line is that we want to change the life of the average citizen.

“Our people are all ears. We pray for you, for Nigeria and wish you the very best of luck,” Soludo concluded.

While meeting with traditional rulers, Atiku, also promised to unite Nigerians by treating each zone equitable, providing 10 million dollars for youth empowerment programmes and dredging Onitsha Seaport to boost and improve economic activities in the state.

According to him, without security, peace and unity, there will never be any development in the country.

“My vision and mission as the president is to unite Nigeria, bring peace and provide adequate security for the people of Nigeria. I will give evey section it’s due right,” he said.

Speaking at the meeting, the Chairman of Anambra State Traditional Rulers and Obi of Onitsha, Igwe Alfred Achebe, said the monarchs are non-partisan and will only support whosever wins.

According to him, their jobs are to pray, direct and control the affairs of their various communities.

He said that this is the not first time Atiku is meeting them, noting that in 2019 he met them in Onitsha.

“Our desire is to have a president who will bring peace, unity and security in the country. We wish you the best,” he said.

Also, Senator Ben Obi said that Atiku decided to pick Ifeanyi Okowa because Ohaeneze had directed that no Igbo man from the South-East should pick the deputy ticket.

According to him, Atiku has been a friend of the Igbo even as a vice president of the country and decided to pick an Igbo man from Delta state.

“Atiku made it possible for Biafra soldiers to be properly and officially retire under Obasanjo government. He picked me as a running and also picked Peter Obi as his running mate. He also married our daughter, he is part of us and he loves Igbo,” he said.