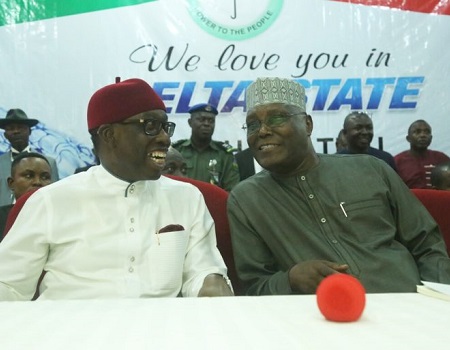 The presidential candidate of the Peoples Democratic Party (PDP), Atiku Abubakar and his running mate, Ifeanyi Okowa are to attempt to resolve the crisis besetting the Imo State chapter of the party.

Party leaders in the state have been at each other’s throats following the composition of the state chapter of the Presidential Campaign Council (PCC) with some alleging exclusion.

Supporters of former governor of the state, Emeka Ihedioha, stormed the national secretariat of the party in Abuja on Tuesday to protest their alleged exclusion while a meeting of the stakeholders and the National Working Committee (NWC) led by the Chairman of the party, Dr Iyorchia Ayu, was on.

The meeting, at the instance of the NWC, was called to resolve the brewing crisis and explore ways to reposition it for better electoral showings in the next election cycle.

A statement by Simon Imobo-Tswam, special adviser on Media to the party boss, confirmed that the newly constituted PCC at the state level had pitched some chieftains of the party against the State Working Committee (SWC) over charges of exclusion.

It revealed that among the decisions reached was that Atiku Abubakar and his running-mate, Okowa, will wade into the crisis, with a view to resolving the matter and other contending issues comprehensively and amicably.

While Atiku will meet with a few party stakeholders from the state, including Ex-Governor Emeka Ihedioha as well as the PDP National Secretary, Sen. Samuel Anyanwu, to soften the ground, Gov. Okowa will, thereafter, head a small panel that will reconcile all aggrieved parties and resolve all contending matters,” it said.

Ayu, who disclosed this after the well-attended meeting, regretted the loss of Imo to PDP via a controversial Supreme Court judgement, and pointed out that recovering Imo for the PDP was a priority to the present leadership of the party.

He added: “Unity is crucial. And it’s only with the unity that we can regain or recover Imo. And the route to that recovery is by winning the presidential election next February. Once we win the presidency next year, you will need to work less for the governorship victory.

“So, return home, close ranks and get to work. Our strength is in our unity. After the elections in February, the NWC will give Imo closer attention. For now, focus on winning the presidency. Don’t dissipate energies on what is trivial or far away. Together, we are stronger.”

Speaking further, he said; “In Ekiti, we were disunited. And we lost. Disunity led to defeat. We had success in Osun because we were united. It’s the same thing in Imo. If we refuse to unite, we will have the Ekiti debacle. But if we unite now, the Osun experience awaits us.”

All speakers at the meeting aired their grievances but advised against allowing petty differences or personal ambitions to tear the party apart, and give the ruling APC undeserved longevity in the state.