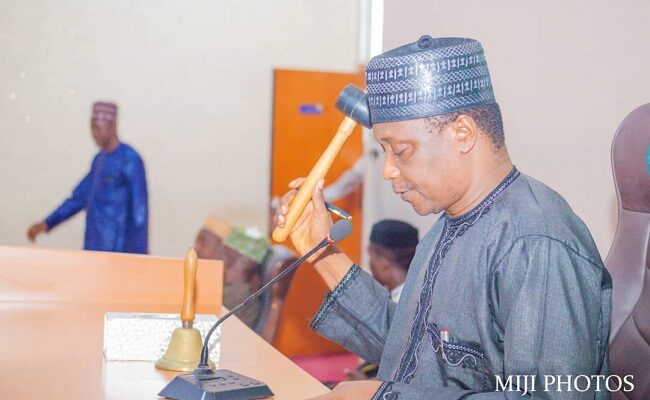 The passage of the appropriation followed the presentation and adoption of the report of the House Committee on Budget and Appropriation on the 2023 proposed budget estimates which was laid before the Assembly by the Chairman of the Committee, Hon. Abdulkadir Umar Dewu representing Kirfi Constituency.

According to the Committee, after rigorous and extensive scrutiny of the budget document and reports submitted by various committees, it found that the sum of ₦202,641,558,614.46 is budgeted for the 2023 fiscal year, which is 2.5% higher than the 2022 Appropriation Law.

The Committee further explained that it had obtained the consolidated copies of the 2022 budget performances and revenue profiles which comprised statutory allocations, VAT, capital receipts, and internally generated revenue from the month of January to November 2022 from the Ministries of Budget and Economic Planning and Finance and Economic Development for guidance prior to the commencement of 2023 budget defense in respect of all MDAs in the State.

The Committee had also invited various MDAs for budget defense sessions for clarifications on grey areas.

The Committee, therefore, recommended that the Executive Arm should be urged to establish a Fiscal Responsibility Commission to ensure transparency, probity, and accountability in terms of the management of public funds by all MDAs in the State and considering the technical nature of the 2023 Budget document which is a paradigm shift from the previous approach.

It further recommended that the House should as a matter of urgency organize a series of training and workshops for all the chairmen, members, and Secretaries of standing committees to enable them to understand the nitty-gritty of recent development pertaining to budgetary system.

The House unanimously adopted the recommendations of the Committee while the Majority Leader Hon. Tijjani Muhammad Aliyu requested that the House should allow the Bauchi State 2023 Appropriation Bill to undergo 3rd reading and was seconded by the Minority Leader, Hon. Bakoji Aliyu Bobbo.

Upon approval by the Members, the Speaker directed the Clerk of the House, Umar Yusuf Gital Esq to carry out the 3rd reading.

The Speaker commended the House Committee on Budget and Appropriation under the leadership of Hon. Abdulkadir Umar Dewu representing Kirfi Constituency and all the Standing Committees of the House for doing a remarkable job in scrutinizing and carrying out all legislative processes, thoroughly, within the timeframe given.

He explained that the Bill which is submitted to the House by the Bauchi State Government, when passed into law, will significantly improve the lives of citizens of Bauchi State living at the border areas of the State.

According to him, such disputes are being continuously resolved under the guidance of the National Boundary Commission in conjunction with the State Boundary Committees in all the States and it is worth noting that there exists at the national level, a National Border Areas Development Commission which is essentially aimed at developing the international border areas and give assistance to the Subnational Borders Development Agencies where they exist.

Hon. Tijjani Muhammad Aliyu further stated that in the process of resolving the disputes with various states, it was realized that the lack of amenities at the border areas, is greatly hampering the establishment of exact border lines between Bauchi State and its neighbouring States.

In most cases, a single classroom or health facility helps to define the border and avoid conflict and if Bauchi State is able to establish a permanent feature of the class, health facility, or any other service, the residents will always cherish that and identify with the local authorities and confirm their being from Bauchi State rather than any other State which will greatly avoid conflict with neighbouring States.

He submitted that the funding and sustainability of the Agency is meant to come largely from the Bauchi State Government, as it’s with most State agencies and in the case of the Border Communities Development Agency, additional funding is expected from other sources such as the Border Development Commission at the national level and international donor agencies related to border issues and migration.

The Majority Leader added that the Border Communities Development Agency Bill 2022, when passed into law, will greatly improve the lives of citizens living at borders by ensuring basic development amenities in education, health, and infrastructure has reached them in a very short period of time thereby reducing inter and intra conflicts between Bauchi State and its neighbouring States and even between neighbouring local government areas.

In his contribution, Hon. Saleh Hodi Jibir representing Disina Constituency said that the Bill is timely because his Constituency is a victim of border crisis 10 years ago which led to the death of some people and loss of properties and the relocation of a market between Jigawa and Bauchi States.

Hon. Musa Wakili Nakwada representing Bogoro Constituency said that his Constituency shares a border with Plateau State and sometimes when issues arise, one has nowhere to go, therefore, the Bill was both timely and very important.

Minority Leader, Hon. Bakoji Aliyu Bobbo representing Chiroma Constituency said that although the financial position of the State and time have halted the establishment of many agencies in the state, he is convinced that this Agency will get additional funding from other sources to complement the Agency’s work and sustain its existence.

He, therefore, suggests that the bill should scale second reading. He was seconded by the Deputy Speaker, Hon. Danlami Ahmed Kawule representing Zungur/Galambi Constituency.

The Majority Leader, Hon. Tijjani Muhammad Aliyu requested the Honourable House to allow the Bill for a Law to establish Bauchi State Border Communities Development Agency 2022 to undergo second reading and referred to the House Committee on Special Duties and was seconded by Minority Leader Hon. Bakoji Aliyu Bobbo

Upon approval by the House, the Speaker directed the Clerk of the House Umar Yusuf Gital to carry out the 2nd reading.

Thereafter, the House refers the Bill to the House Committee on Special Duties and was given four weeks to report back.