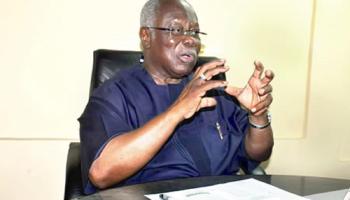 Bode George: why Atiku may lose next year’s poll He said the way and manner the protracted leadership crisis is resolved will determine the fate of the platform in the 2023 polls.

He said: “Let me declare categorically that the positions of presidential candidate and national chairman cannot come from the same zone.”

George, a Navy Commodore, spoke with reporters in Lagos on the consequence of politics of exclusion and inequality in the party.

Accompanied by his wife, Rolly, Senator Kofoworola Akerele-Bucknor and other party chieftains, the party elder advised Ayu to honour his promise to step down if the presidential candidate emerged from the North.

He lamented that PDP has violated the principle of inclusion because the candidate, chairman and campaign director are from the North.

George said the position of the national chairman should come to the Southwest to give the region a sense of inclusion, belonging, equity and justice.

However, the Northern PDP Elders Support Group urged warring chieftains to cease fire, stressing that the lingering crisis is not in the interest of the platform.

To the party elders, PDP is facing a ‘clear and present danger’ that might thwart the window of opportunity for winning.

He said flawed personal interests are being sustained at the expense of party unity and cohesion.

George said if Ayu refused to resign, he will not join the bandwagon of deceitful politicians for the 2023 project.

He stressed: “Unfortunately, with what we are presently witnessing, our party may lose the next presidential election if we continue to disregard or fail to address the feeling and grievances of ‘alienation.’

“Until this party returns to the founding fathers’ principles of unity, with equity, fairness and justice being the pedestal for any political decision taken in this party; and ensuring broad-mindedness to accommodate the concerns of all zones in this country, PDP becomes vulnerable to disaster in the 2023 elections.

“Unless we are united, with equity, fairness and justice, our party may be fragmented before 2023.

“In May this year, we elected our presidential candidate in the person of HE. Alhaji Atiku Abubakar, setting aside the principle of rotation as enshrined in the constitution of our party in the interest of peace and unity of our party. “Today, we are in a situation in which our National Chairman is from the same zone as our presidential candidate.

“Some people are insisting that there is nothing wrong with this present arrangement.

“Some have argued that this happened during Chief Olusegun Obasanjo’s administration, where the candidate and the national chairman were from the same zone.

“Let the truth be told, there are remarkable differences in the scenario then and now.

“Then, we had the leader of the party who was then a sitting president from the South and the candidate was from the North.

“In addition, the National Chairman, Dr Ahmadu Ali, was then on his way out. Today we have no sitting President from our party in Aso Villa so, that argument falls flat. We need to stop playing games and being zombified.”

George maintained that Ayu must quit for a new chairman to emerge from another zone before the presidential campaign starts.

He said: “As a result of the need to have inclusiveness, oneness and togetherness, it does not make any political sense for the presidential candidate and the national chairman to come from the same zone.

“Now, we have a situation in which some elders are saying ‘it does not matter’. Can we go into the election with Alhaji Atiku Abubakar and Dr. Iyorchia Ayu, from the same zone, leading our national campaign?

“This will be an affront, impunity, and an insult to the electorate and party members from the South.

“So, why has he refused to honour his words? Why is he reneging? What is driving his reluctance not to resign?

“We are promising Nigerians that when we get to government, every tribe will have a say in government but now, how do we want Nigerians to trust us when we cannot fulfil a simple promise?

“Our national chairman made a pledge and in such a short time he has broken the pledge.

“Our party members from the South are now asking the following questions patently: ‘Have we thrown our integrity to the dogs?

“How will Southern PDP leaders convince their electorate to vote for our candidate when there is no substantial national position in the Southwest?

“How can we go into the election season with this type of division and expect to win the February 25 presidential election?

“Unless we are united; unless we have fairness, equity and justice in our system, the party and the country are heading nowhere.”

George said the resignation of the Board of Trustees (BoT) chairman was not meaningful, stressing that it is not among the top six positions acknowledged by the party.

He also faulted the vote of confidence passed in Ayu and the NWC at the last National Executive Committee (NEC) meeting, saying that it cannot hold sway because most Southern members were absent.

He said what Dr. Ayu has succeeded in doing by refusing to step down was simply telling PDP members from the South that they are of no importance.

George believes that Atiku would be gambling with the election by keeping Ayu in office.

He added: “The position of national chairman must revert to the South now and not after the general elections.

“If we don’t do that, then, you are telling some Nigerians that you don’t need them to win in 2023 and that will be very unfortunate.”

George emphasized that “if this issue is not addressed urgently, it means some members of our party are working for the opposition or against the interest of our party.”

He said: “What Southwesterners in our party are asking for is very simple: we don’t want the position of Director-General of the Presidential Campaign, rather, we want the office of the national chairman. This we have made very clear.

“Our party must do the needful now. Anything else will be suicidal.”

However, Northern People’s Democratic Party Elders’ Support Group urged aggrieved chieftains to give peace a chance in the interest of the party.

The group urged Southern PDP elders to tread with care and avoid activities that could hinder the victory of the party.

To them, there must be a peaceful and amicable way of ending the ongoing campaign for Ayu’s removal. According to them, there is a need for stakeholders to sheathe their swords for PDP to make progress and unite ahead of the inauguration of the Atiku/Okowa Presidential Campaign Council.

The National Coordinator of the group, Dr. Nasiru Aliyu Sadauki, said: “The party leaders should face important issues of economic condition, insecurity, poverty, educational crisis and other challenges that are threatening Nigeria’s national unity and cohesion as a people rather than majoring in a minor issue like calling for the removal of the chairman.

“There are issues on the ground that need leaders to make sacrifices, offer solutions and relief to the public.

“No sensible party supporter will promote and seek Ayu’s exit in this time of expected cooperation, unity and understanding in the party.

“Nigerians are tired of such media display of arrogant characters by a certain group of political elites in the country.

“Let us face the issue and rebuke or disregard any political class who is more interested in seeming public sympathy rather than act to help rebuild the nation.

“The PDP crisis is surely a setup, intended to destroy every good and positive transformation of the Ayu-led NWC. Those fanning the ember of disunity, cohesion and progress of PDP are doing so to create confusion that may make Nigerians reconsider APC.

“We call on the PDP supporters within and outside the country to unite and support the leadership of the party under Dr. Iyorchia Ayu to collectively rescue and rebuild our country from the ruins of APC.

The group advised the Ayu-led NEC to swing into action to unite the party before the commencement of the campaign. Continue Reading