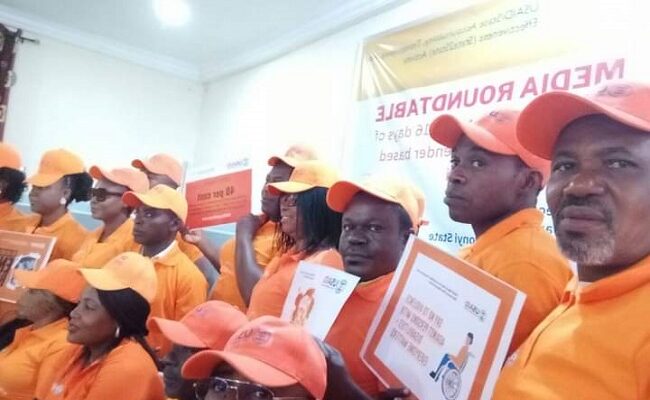 The United State Agency for International Development (USAID) State-to-State has called on journalists to step up the voices of women and girls in their area to eradicate Gender-Based Violence (GBV).

Gender Specialist with the USAID State-to-State, Ejiro Okotie made the call during media round table in commemoration 2022 Activism Against Gender-Based Violence in Ebonyi State.

She called on journalists to boost their reportage against the menace which has send many women to their earlier grave and other harmful conditions as women and girls have continued to be at the receiving end of GBV and blamed it on traditional and cultural factors.

“Let us think what we can do in terms of action towards ending all forms of Gender-Based Violence(GBV) in Ebonyi State.

“We want to work with the media to ensure that we amplify the voices of women and girls to end GBV in the state. We want to see how the media can amplify messages on GBV to end the menace.

“Violence against women and girls has been a very critical issue and many times, a lot of it get unreported because there is a lot of silence around it.

“Women and girls have continued to be at the receiving end of GBV simply because of different factors; traditional, cultural factors,” she stated.

In his remarks, the Chairman Nigeria Union of Journalists Ebonyi State Chapter, Comrade Anthony Nwizi, promised to ensure that all reported cases are given necessary publication to end gender based violence and other harmful practices.