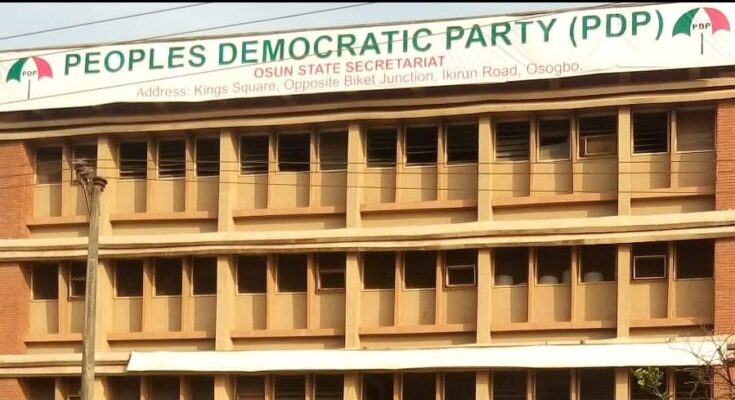 The Osun State chapter of the Peoples Democratic Party (PDP) has called on the Nigeria Police and other security agencies to bring to book perpetrators of the destruction that was carried out on the campaign office of its Osun Central Senatorial candidate.

This is as the party warned that such ugly occurrence, if left unchecked, was capable of throwing the State into an unimaginable crisis.

Osun PDP, in a statement on Saturday, which was signed by Oladele Bamiji, its Director of Media, also described the attack on the campaign office of its candidate in Osun Central, Olubiyi Fadeyi, as highly provocative, thoughtless and dangerous considering the volatile security situation in the State.

According to the statement, the Osun Central Senatorial Campaign Office of its candidate, Olubiyi Fadeyi, situated along Oke-Fia-old Garage area of Osogbo was at the early hours of Friday, attacked and vandalized by unknown persons suspected to be political thugs.

The statement added that properties worth several millions of naira were also destroyed at the campaign office, with cars, billboards, computers and other office equipment badly damaged during the attack.

The PDP, which charged the police to do everything under the law to bring perpetrators of the attack to justice without delay, also warned that the party may not hold down its members in the wake of such a dangerous anomaly, especially when the culprits were pointedly identifiable in the State.

According to the statement, “The Osun Central Senatorial PDP candidate in the 2023 general elections, Mr Olubiyi Fadeyi is a peace loving philanthropist, who has never been found wanting in his conduct as a private entity and also as candidate of the party. The PDP then wondered why the APC would target him for attack.

“We remind the outgoing APC of the danger embedded in the latest turn of events.”

“As we approach the 2023 general election, no amount of unprovoked attacks will deter our candidates from working with the electorate to condemn the APC and its candidates to the dustbin of history in the State,” the PDP assured. Continue Reading