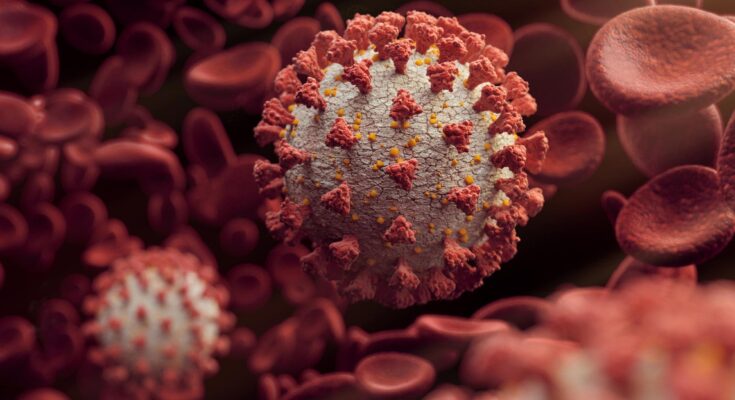 The Nigeria Centre for Disease Control has again warned of a possible fifth wave of the Covid-19 virus in the country, given the resurgence in the number of confirmed cases. It disclosed that about 1,332 cases were recorded in one week.

It therefore called on states to ramp up testing as it asked Nigerians to embrace the safety protocols to curb the spread of the virus. “In the last eight weeks, the test positivity ratio has continued to increase,” the NCDC added.

Nationnewslead reports that as of July 22, 2022, Nigeria has recorded no fewer than 260,339 confirmed cases. While 253,566 cases have been successfully discharged, 3,147 lost their lives to complications arising from the virus.

As of Friday, the World Health Organisation reported that there were over 565 million cases globally, out of which over 6.3 million persons lost their lives. About 9,181,118 cases had however been confirmed in Africa. It noted also that over 12 billion doses of vaccines of the virus, covering first, second and booster jabs, had been administered as of July 19.

NCDC data obtained on Saturday by our correspondents from the latest situation report of the disease however revealed that testing in the country had reduced by 53.42 per cent.

Though no death was reported during the referenced period, the NCDC noted, “In the last eight weeks, the test positivity ratio has continued to increase with the highest increase being in this reporting week. Majority of the cases were reported from Lagos, FCT, Rivers and Kano states.”

The NCDC, however, said ospitalization and fatalities had remained low, suggesting the recorded cases were mostly mild to moderate. It noted in its report that it had reached out to states to increase their testing, adding that addition of laboratories was ongoing.

According to the National Primary Healthcare Development Agency, as of Friday, 26,127,761 persons have been fully vaccinated in Nigeria, representing 23.4 per cent of the total eligible population, while 11,819,911 have been partially vaccinated.

Nationnewslead earlier reported that Nigeria missed the 40 per cent herd immunity deadline set by global leaders in a bid to ensure fast vaccination drive and herd immunity in the various countries across the world.

The Ekiti State Commissioner for Health and Human Services, Dr Oyebanji Filani, said on Saturday that the state recorded 74 fresh cases, which necessitated the reactivation of the preventive measures.

Filani said residents must adhere to the measures including wearing of face masks in public gatherings, proper handwashing in a flowing water or use of alcohol-based hand sanitiser, social or physical distancing, reporting at the nearest health facility when sick, getting tested and isolating if positive, and adherence to Covid-19 measures by banks and other institutions.

In a statement titled, ‘Ekiti announces return to strict COVID-19 preventive measures to mitigate increasing nationwide spread’, the commissioner harped on the efficacy of the Covid-19 vaccines, saying, “Vaccination remains the most effective means of curbing this pandemic and we encourage all residents of the state to get vaccinated. As at today (Saturday), 384,730 persons are fully vaccinated (in Ekiti State). However, this is not sufficient to achieve herd immunity, hence the re-enforcement of preventive protocols.”

“As the state Ministry of Health continues to monitor the recent increase in Covid-19 cases across the country and a recent spike in the state with 74 persons currently positive, all residents of Ekiti State are hereby advised to adhere strictly to the government’s public health and social measures to prevent the spread of COVID-19.”

He asked residents of the state to visit vaccination posts nearest to them for their complete jabs.

Speaking on the reason for the surge, the Ondo State Epidemiologist, Dr Stephen Fagbemi, in an interview with our correspondent, attributed the surge to the weather and low vaccination rate.

He stated, “There are two hypotheses: the weather is getting colder and it’s like flu. In a cold season like this, we may have more cases when people have not been vaccinated and our immunity is not up to the level of fighting the virus.

“Also, our vaccination rate is low. There are some countries already taking second and third boosters but we are still on the first booster. The tests show that we are dealing with a new strain, so people need to get vaccinated. We have been saying this but people do not adhere to our instructions. Covid-19 is going to be with us for a long time, so it is better people to get vaccinated.”

Also, a former chairman of the Association of General and Private Medical Practitioners of Nigeria, Lagos Chapter, Dr Tunji Akintade, advised Nigerians to adhere to the non-pharmaceutical protocols.

He said in an interview with one of our correspondents, “The increase in cases is as a result of an increase in testing. There was a time we were not reporting more cases; it was because there was not much testing.

“People need to go back to the non-pharmaceutical protocols like wearing face masks, washing of hands and maintaining social distancing,” he added.

The immediate past president of the National Association of Resident Doctors, Dr Uyilawa Okhuaihesuyi, also stressed that prevention was key.

“People need to do the needful; they need to get vaccinated, maintain social distancing and wear their masks. It is obvious that there is a surge in the infection globally and people need to take care of their health because the government cannot do everything for us,” he added.

Also speaking in an interview with our correspondent, a professor of medical virology at the University of Maiduguri, Marycelin Baba said the country might not be able to withstand another lockdown and that testing and the vaccination drive should continue.

Baba added, “There is a need for Nigerians to embrace the non-pharmaceutical measures. The coronavirus is a virus that mutates and when you have more variants coming up then you see newer characteristics.

“When you look at what is going on in Nigeria now, you will see that most people act as if the virus has gone and that is wrong. There is also no need for states to slow down on testing. I know most people won’t go for a test until they discover symptoms, but that is not fair enough. We are still in a pandemic. This is not the time for us to joke about it.”

Another health expert at the Adekunle Ajasin University, Prof Victor Olumekun, said virulent variants were coming up and that the pandemic had yet to be over.

“The only thing is that it is not as deadly as it used to be because we are approaching herd immunity. That means the virulence and the infectivity will reduce; that does not mean it has gone. People who are yet to get vaccinated should go and do so.”

Nationnewslead reports that countries such as the United Kingdom have continued to witness a recent spike in cases. A report from the Office for National Statistics stated that the number of people testing positive for the virus in the UK within seven days rose to 3,760,200.

In the United States, President Joe Biden was a few days ago diagnosed with the virus and is experiencing “very mild symptoms”, a White House statement said on Thursday.

His deputy, Kamala Harris, had tested positive for the virus in April.

According to NNL, Oniyangi spoke in Ilorin, the Kwara State capital, during the eighth Kola Olafimihan Endowment Lecture at the College of Health Sciences, University of Ilorin, titled ‘The Pandemic Now and Next Time – Matters Arising’.

Oniyangi said the symptoms ranged from zero to life-threatening situations. “Severe illness is more likely in the elderly and those with underlying medical conditions. These symptoms are most commonly respiratory with pneumonia-like illnesses, difficulty in breathing, cough, and loss of smell among others,” she said. Continue Reading