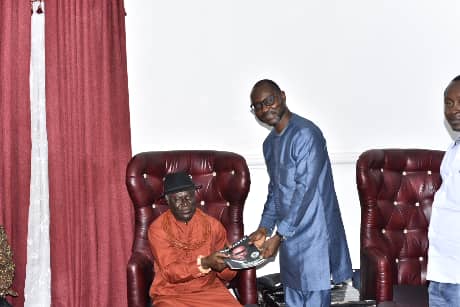 Ahead of the 2023 forthcoming general elections, the Pere Amakosu of Ogbe-Ijoh Warri Kingdom in Warri South-West Local Government Area of Delta State, HRM Couple Oromoni Mobeni II, has charged the electorate to vote for personalities rather than political parties.

He gave the charge during the visit of retired Commodore Omatseye Nesiama, who’s the Delta South Senatorial candidate under the New Ñigeria People Party (NNPP) at his palace in Warri. Delta State.

The Ijaw monarch averred that Nigerians needed to vote in personalities because the ruling All Progressives Congress (APC) and the People’s Democratic Party (PDP) have failed the country.

While further urging the people of Delta South Senatorial District to vote for personalities rather than parties, the Ogbe-Ijoh particularly called on the Itsekiris to vote for Commodore Nesiama (retd).

He described Commodore Nesiama as the best candidate among all the contestants vying for the Delta South Senatorial District office.

According to him, Delta South Senatorial District is lagging behind in development under the watch of the PDP and the APC.

“In those days, the best wins the election to represent the people.

“Some years back, anytime our national issue comes up, we will be happy to watch the television where you see Leo Ogor, where you see Shehu Sani, where you see late Urhobo man who was in the Senate before, Pius Ewherido, they make believe that there are people representing you.

“But these days we worship money,” Pere Amakosu, who was flanked by members of Ogbe-Ijoh Warri Traditional Council of Chiefs, lamented.

He said Commodore Nesiama who is fondly referred to as the “Commodore of Hope,” having served at the Nigerian Navy, should be given the opportunity to exhibit the quality of what he has been trained for.

Earlier, Commodore Nesiama (retd) had presented himself with the NNPP Candidates for Warri South Constituency II and Warri South-West Constituency, Tosan Pirah and Engr. Shola Olue before the King as he sought his prayers and supports towards their ambitions.

“I believe I am capable of being a bridge builder because of my ancestral upbringing. I’m ready to serve,” he noted.

Commodore Nesiama promised to initiate and support legislation that will bring about reverence for the traditional institution.