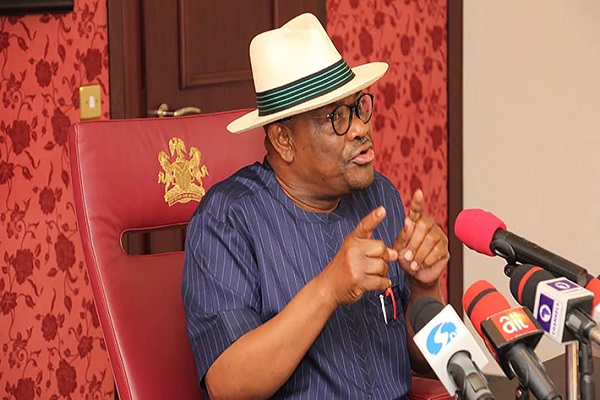 Uneasy calm seems to be pervading the Peoples Democratic Party, PDP,  following what party leaders described as mixed signals emanating from  Rivers State Governor, Mr. Nyesom Wike, over the crisis in the party.

Nationnewslead gathered yesterday that party leaders are at sea on how to approach the situation after a series of breaches of a gentleman’s agreement between the camps of the party’s presidential candidate, Alhaji Atiku Abubakar, and Wike, asking them to desist from making inflammatory remarks.

Both Atiku and Wike have been in a frosty relationship over moves to oust the party’s National Chairman, Senator Iyorchia Ayu, and the aftermath of PDP presidential primary.

Though a reconciliation committee was set up by the two leaders, the committee is yet to reach a consensus on ways out of the impasse.

However, Governor Wike, yesterday, urged Makarfi to stop bad-mouthing him and be focused on ensuring he delivers victory in Kaduna for the PDP in next year’s elections.

Meanwhile, the leadership of the PDP in Edo State, has urged the party chairman to, as a matter of urgency, call a meeting of all PDP governors to fashion a way out of the feud between Atiku and the governor of Rivers State.

We can’t bend over backwards for him — Atiku’s loyalists

Some loyalists of the former Vice President, who spoke with Vanguard, faulted comments being made by the governor, saying they appeared deliberately skewed to keep everyone guessing.

The leaders are of the view that Atiku should call the bluff of the Rivers governor by “cutting our losses, move on and concentrate on building the party ahead of the 2023 elections.”

A party leader, who pleaded anonymity out of respect for the agreement,  said: “It is heart-wrenching that this matter has dragged this long.

“It was agreed the last time that all parties desist from further making inflammatory remarks.

“It was borne out of this that Atiku caused a statement to be issued by his media team urging his supporters to bridle their tongues but this act of goodwill is not being returned in kind. This is quite unfortunate.

“I must say at this point

that Governor Wike has made up his mind about what he wants to do. Bending over backwards to accede to everything he has asked for will be shooting ourselves in the foot.

“Personally, I rather we cut our losses, move on and concentrate on building the party ahead of the 2023 elections.

“We just made significant inroads in Kano with the defection of former Governor Ibrahim Shekarau and his teeming supporters. These are the kinds of things we should be celebrating.”

Another party source said: “My reading of the situation is that there are other local issues in Rivers politics that are being elevated to the national.

“Comments being made by the governor, with due respect to him, appear deliberately skewed to keep everyone guessing.  The truth is we cannot wait forever, something has to give.

“The truth is that whichever decision you take in politics, not everyone will be happy or accept it for one reason or another. Our presidential candidate has demonstrated good faith.

“However, it will be disastrous for anyone to contemplate a leadership change at this time, the issue of anyone removing Iyorchia Ayu as national chairman before the election does not arise.”

Another PDP leader, who spoke to Vanguard in confidence, said Wike’s recent comments are putting the former vice president on edge, which is not going down well with the latter’s loyalists.

The source, a former member of the National Working Committee, NWC, said: “Wike is giving them (Atiku’s camp) signs that he will work against him. Wike is getting feelers that some interests around Atiku do not want the PDP presidential candidate to give in to his demands.

“Wike also has some people within Atiku’s camp, especially in the NWC. The anger with the Atiku camp is that Wike cannot be seen to be controlling the party. Also, Wike is expecting Atiku to give him an update on what was discussed at their London meeting but Atiku is yet to call him. That is why you hear Wike making those comments.”

Asked whether the party will wield the big stick against the Rivers governor for alleged anti-party activities, the source said: “The party cannot sanction him. It will get to a point where Wike will pull out of the party or act as a spoiler.

“If he acts as a spoiler, the party will have no grounds to sanction him for anti-party activities and if the party decides to expel him, it is looking for more trouble because some of his loyalists will resist the move.

On whether or not Atiku is still disposed to reconciling with Wike, the source said: “Atiku wants to reconcile with Wike but he is in a dilemma and Atiku’s dilemma is that Ayu was one of those who helped him win the ticket.

“Atiku wants to reorganize the party but Ayu and his loyalists are resisting the move, insisting that the former Vice President must protect and stand for them. He is confused. He knows what Wike can do and he doesn’t want to lose Wike but the interests around him want him to damn Wike.”

Our crisis’ll be resolved soon —Olafeso

Expressing optimism over the fortunes of the party, a former Vice Chairman (South West) of the PDP, Dr Eddy Olafeso said the crisis rocking the party would be over soon.

Olafeso said: “There is no war in the PDP, it is alignment and realignment and communication that is still in progress. I don’t think our party has any crisis, the majority of the people are on the same page. Our concern at this moment is the state of the Nigerian nation and the possibility of providing answers to all the myriads of problems that are facing Nigeria.

There is ongoing communication and that communication will be concluded. However it is, there is no place in the whole world where you don’t have such disagreements but we have an internal mechanism to resolve that. At the appointed time, it will be resolved.”

Meanwhile, Makarfi, a former PDP chairman, who spoke on Channels Television’s breakfast show,  Sunrise Daily, yesterday, argued that frustrated youths are using Obi as a symbol, adding that youths should not make decisions on the presidential candidate to vote for in anger.

Obi had left the PDP in May and emerged as the Labour Party’s presidential candidate.

Speaking on the development during the programme, Makarfi said: “Nigerian politics is a bit funny, especially politics of the opposition. Before APC captured power, the opposition came together but unfortunately, we have a situation in Nigeria where the opposition wakes up and everyone tries to capture power.

“I want to make a plea to other opposition parties that let them think about Nigeria first and what is good for Nigeria; let us do what APC did — come together, talk amongst ourselves and arrive at something that all of us will agree to and bring positive change to this country.

“Peter Obi respects me, I respect him. Kwankwaso still is my friend, I respect him but the issue is that we should all swallow personal ambition for the sake of this country and bring positive change by changing the government that is in power today.

“About the fears of the youths, I am not blaming them but when you are frustrated, when you are angry, you may take a decision that will worsen your situation.

But in apparent response to Senator Makarfi, Governor Wike, yesterday, urged the former Kaduna governor to stop bad-mouthing him and be focused on ensuring he delivers victory in Kaduna for the PDP in next year’s elections.

Wike, who spoke while inaugurating the sand-filled area and estate layout project in Ogbum-Nu-Abali in Port Harcourt, faulted Makarfi’s recent jabs at him.

The governor also mocked an alleged rapist in Rivers PDP he failed to name for frolicking with Atiku.

He said: “I watched Makarfi on national television say, Wike, you’re sabotaging other people.’ I don’t know who says the other people have not. What I want to advise Makarfi is, look, you have a job, make sure PDP wins in Kaduna State. That is your job, leave Wike alone.

“Take it upon yourself that Kaduna falls to PDP. I don’t want to hear excuses that they rigged election or they didn’t rig election. That is what I’ve told everybody. In Kano, make sure PDP wins. In Niger, ensure PDP wins, in Jigawa, make sure PDP wins. If you win, then see whether PDP wins here or not. It is operation deliver your state. Don’t use anybody’s state to add up.”

On the unnamed rapist Rivers PDP member frolicking with Atiku, the Rivers governor said: “I was watching television yesterday (Monday) when they went to Kano to receive Shekarau. I saw one rapist from Rivers State sitting at the back where he went to join them to receive Shekarau but I asked him, how many people have you made to join your party in your state.’

“You have gone to receive somebody somewhere but you have not made efforts to receive other people to join your party in your state. You like when food is ready, you’ll go but for you to cook, it is where people have cooked that you go to eat the food but you won’t cook your own.

“As people who want the party to win or who want their candidate to win the election, what role are you playing in your state to make sure your party wins the election? How many people have you been able to galvanize, and mobilize to leave their party to join your party? That is to show you are committed, willing and ready to make your party win an election.

Meanwhile, a statement by the state chairman of the party, Dr Tony Aziegbemi said the call became necessary because of Wike’s meetings with former President Olusegun Obasanjo and Presidential candidate of the All Progressives Congress, APC, Bola Tinubu.

Aziegbemi said: “With barely few months to the 2023 general elections that would herald a new, progressive and functional government headed by Alhaji Atiku Abubakar of the PDP, the need for the party to close ranks, irrespective of perceived differences should now be at the front burner.

“The current disposition of some of our respected leaders is giving room for concern among the members of the party who are awaiting political directives from their leaders.

“We are recommending  that more meetings between the  Governors on the party’s platform not restricted  to  the five Governors be convened  to further strengthen the  party ahead of the  presidential election.

“The Nigerian people are eagerly waiting for the PDP to take over governance from  the present administration which has put Nigeria in the present economic predicament, even as we assure Nigerians   that our party (PDP) when voted into power in the elections, will not disappoint Nigerians as it will do more and better than it had done in it’s about 16 years in government.

“There are no mincing words that Edo state’s  votes for Atiku Abubakar are non-negotiable. We are enjoining our supporters to be resolute in their resolve as the current issues affecting the party would be resolved in favour of the party in no distant time.” Continue Reading