Home Politics Ekiti Assembly of two speakers in one week 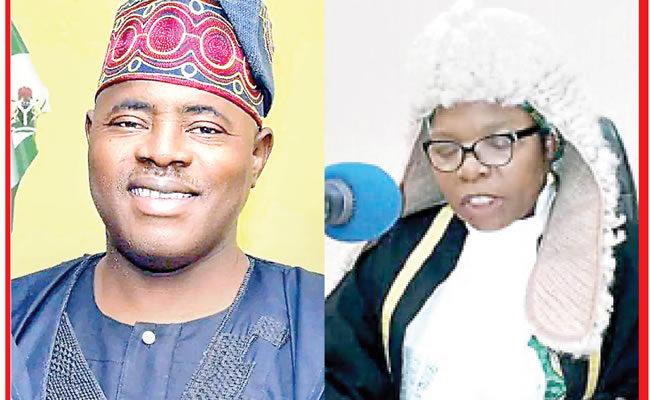 Ekiti Assembly of two speakers in one week

‘YOMI AYELESO examines the crisis rocking the Ekiti State House of Asssembly, which has resulted in two members laying claim to the office of Speaker in the last few days to succeed former Speaker Funminiyi Afuye, who died on October 19 after he reportedly suffered cardiac arrest.

BARELY a month after the inauguration of Biodun Oyebanji as the fifth governor of Ekiti, the state House of Assembly has been enmeshed in a deep crisis over the election of a new speaker to replace the late Funminiyi Afuye who died last month. Afuye, who represented Ikere constituency 1, from Ekiti South senatorial district in the 26-member house, was elected speaker at the inauguration of the sixth Assembly in June 2019 and presided over the All Progressives Congress-dominated legislative arm for three and half years without rancour and displayed leadership qualities in  stabilising the legislative arm of government.

However, just about four days after Afuye was buried in his home town, the 24 lawmakers regrouped in the plenary on November 15 for the election of a new speaker. It was gathered that the leadership of APC in the state led by former governor, Dr Kayode Fayemi reportedly met with the lawmakers on November 13 and impressed it on them to elect a member from the southern district, Mrs Bunmi Adelugba (Emure constituency) to finish up the term started by Afuye in the sixth Assembly.

In a deft political move by some lawmakers which resulted in a shocker to the APC leaders, the outcome of the election at the plenary was clearly against the choice of the leaders. In the election presided over by the clerk of the Assembly, Tola Esan, Gboyega Aribisogan from Ikole constituency 1 scored 15 votes to defeat Adelugba who garnered 10 votes. It also gathered that some of the lawmakers revolted against the directives of the party leaders by voting against Adelugba due to what many described as payback time for those who allegedly denied them 2023 return tickets to the Assembly “unjustly.” Following the outcomes of the APC primaries in May, a total of 15 members would not be returning to the House , while only 11 members were given return tickets to contest the next year’s election. Besides the denial of return tickets, the lawmakers also planned to use the speakership election, according to some of them, to free themselves from the former governor for the remaining few months of their tenure. Some of the lawmakers had also accused the leaders of not treating them fairly during the last administration.

The unfolding development led to the closure of the Assembly complex by security operatives since November 16, due to what the police described as an intelligence report on plans by hoodlums to attack the chamber. But, investigations revealed that the closing down of the complex by the operatives was allegedly an orchestrated plot by the APC leaders to deny Aribisogan and his allies from gaining access to the house for business of lawmaking.

However, the Police Public Relations Officer(PPRO), DSP Abutu Sunday maintained that the action was based on intelligence report that there was looming breakdown of law and order. “We acted on security alert we received that some people were planning to invade the assembly and we owe it a duty to safeguard the lives of the people and public utilities. We can’t wait or tarry and allow the lives of the staff of the assembly to be threatened by any means. So, we took proactive measure by deploying our men there to secure the assembly complex. Our people should not see our action as a big deal, no cause for alarm. We are on top of the situation,” he stressed.

The battle for supremacy took a new dimension last weekend, as the party leaders reportedly fought back. They plotted a revenge against Aribosogan by breaking the ranks of the 15 lawmakers who voted for him last week at the plenary to the side of their preferred candidate, Adelugba with different methods including threats and intimidation. Sources claimed that some of the lawmakers, especially those without return tickets who were hitherto with Aribisogan, were promised better deals in the party and in the new state administration. Close confidants of the APC leaders, who did not want Aribisogan as speaker, were said not to be comfortable with him leading the legislative arm, over what they allegedly termed as “trust issues.”

One of the lawmakers claimed that Governor Oyebanji was furious and disappointed with the distraction being faced in his first one month in office over the development in the hallowed chamber but could not intervene openly or discreetly because he was hamstrung. The lawmaker, who pleaded anonymity said: “Can you imagine that we were to elect our speaker, the leaders did not allow the governor to have an express input in the whole process. They asked us to support Bunmi Adelugba as speaker without even inviting the governor to the meeting, what we have realised is that  it appears Governor Oyebanji has been somehow boxed into a corner, especially with the undue influence on appointments, coupled with cases against him currently in court. So, though he (Oyebanji) prefers the election and choice of Aribisogan as the speaker for political balancing and enhance independence of the legislative arm, it is difficult for him to be seen or heard in support of the arrangement because of the role of some political godfathers.

“ As we speak, the governor is from the central, his deputy and party chairman are from the South leaving the North with nothing in the power equation in the state and that was the reason for the emergence of Aribisogan, who is from the Northern senatorial district. But, these godfathers are insisting on Adelugba from South to become speaker just to hold grip of the Assembly for their biddings. This is unacceptable and people of likes mind in Ekiti must rise up to save the state from selfish and greedy politicians.”

In another twist of events on Monday , the pro-Fayemi lawmakers stormed the Assembly complex as early as 6am to carry out the alleged directives of the leaders to effect leadership change. Workers of the assembly, journalists and visitors were denied entry to the complex by a combined team of operatives of the Ekiti State Police Command. After about three hours in the chamber, Adelugba was reportedly elected as the new speaker after the impeachment of Aribisogan. According to Adelugba, no fewer than 17 members elected her as the speaker during the plenary and that seven lawmakers, alongside Aribisogan, were suspended indefinitely from the house for allegedly sabotaging the passage of the 2022 supplementary budget.

However, Aribisogan while alluding to the action taken against him by the lawmakers as a flagrant violation of the extant rules and the Assembly’s Standing Order, believed that all the actions was a charade. He said: “In view of the foregoing, we hereby call on the Government and people of Ekiti State and all constituted authorities to note that Rt. Honourable Olugboyega Aribisogan remains the Speaker of the Ekiti State House of Assembly. While we urge Ekiti people to be watchful, they should remain calm in the face of the gross subversion of democratic principles which took place in the House of Assembly today. We remain confident that justice and the rule of law will prevail.”

Aribisogan condemned  what he perceived as “illegal invasion of the House of Assembly Chambers by seven disgruntled members at the un-parliamentary hour of 6.00am,  to carry out impeachment against him. He alleged that it was a brazen display of naked power and gross abuse of office for the lawmakers to have held a sitting under a stringent cover by the police to carry out impeachment against, saying such would not stand in the face of the law.

I have no hand in Aribisogan’s impeachment —Fayemi

Former Governor Fayemi has however denied allegations that he was instrumental to the reported removal of Aribisogan as the speaker of the Ekiti Assembly. The head of Fayemi’s media office, Ahmad Sajoh in a statement said: “We wish to clarify that Dr. Fayemi had nothing to do with the removal of the former Speaker by his peers as this was the internal arrangement of the State House of Assembly.  We wish to note that even as Governor, Dr. Fayemi did not interfere with the independence of the House and respected the principle of separation of powers where the House had freedom to decide on their internal affairs. “

Aribisogan should remain as speaker in interest of peace – Olanipekun

Some well-meaning individuals have also spoken on the ongoing political drama going on Ekiti. One of them is Chairman, the Body of Benchers, Chief Wole Olanipekun (SAN), who  suggested that Aribisogan should be retained as the speaker of the state of Assembly as elected by the majority members in the interest of peace, democracy and development of the state. The former chairman of the Nigerian Bar Association (NBS), who is from Ikere-Ekiti, in a statement tagged:  Let Peace and Harmony Reign in Ekiti State, called on the gladiators in APC to be mindful of the fact that a new governor has just been inaugurated in the state and deserved the needed concentration towards delivering his campaign promises to the citizens. He said: “Although the politicians behind the ongoing parliamentary fiasco in Ekiti may see it as business as usual , they should be told in no unmistakable language that it is a veritable threat to the peace , order and good government of the State , and unless nipped in the bud now or immediately, the consequences may be far reaching. It is rather unfortunate that the ruling party in the State has chosen this bizarre manner and route to welcome to office the governor produced on its own ticket. They are most unfair to both the bee Sheriff and the good people of the State.

As an elder and stakeholder in the state , I plead to all the feuding parties and their sponsors qua backers to sheath their swords. They should be reminded that the State does not belong to them alone , but to all of us ; in fact , the politicians are in the minority , hence they should stop seeing , taking and treating the State as their fiefdom , property or estate.  Now, my proposal to end this  self imposed crisis : Let the Speaker , freely elected by the legislators , Honourable Olugboyega Aribisogun be , while the Deputy Speaker , who was elected alongside the late Honourable Funminiyi Afuye retain his position. To me, this is a win – win approach , and in my private discussions with some principal actors in the unwelcome drama , I have made this proposal , but politicians always , but wrongly believe that they possess the monopoly of  wisdom !

With the 2023 appropriation bill and other legislative businesses pending before the Assembly, residents and indeed political watchers are hoping the imbroglio among the lawmakers would be resolved in a  record time for Governor Oyebanji  to fully settle down in delivering his campaign promises to the people.