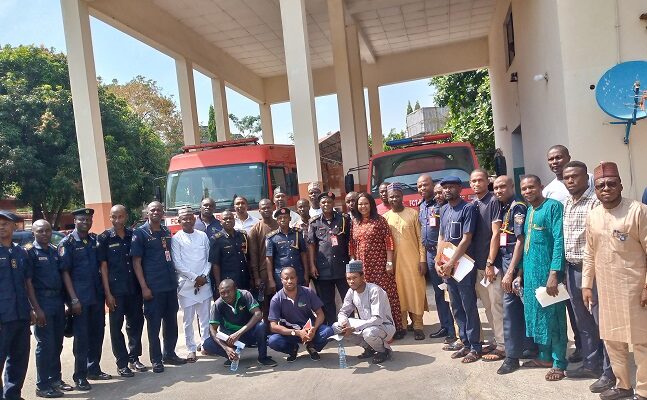 The Federal Capital Territory Fire Service on Thursday in Abuja met with stakeholders made up of managers of filling stations in the capital city, with the main aim of collaborating in order to put an end to fire outbreaks involving oil tankers on the road and inside filling stations.

The acting Director/Controller of FCT Fire Service, Engr. Sani Saidu disclosed this to newsmen during a briefing when he stated that the aim of the meeting was to draw the attention of the managers to the challenges of fire outbreaks and the need for them to adhere strictly to safety measures.

He said; “As I explained in the meeting, we are drawing their attention to the many challenges saddled before them, they should adhere strictly to fire safety measures, if they observe it strictly, fire outbreaks will be a thing of the past concerning filling stations.

“In the same vein, as we also told them, they should also sensitize tanker drivers, those that bring fuel to them, they should sensitize them before they leave, on the necessary things that are needed to be placed in respective tankers, like fire extinguishers, educate the drivers, the conductors on how to use it, it will save a lot.

“As we said earlier, discharging in the hot day afternoon is not advisable at all, because of mechanism that I explained to them, it is not advisable at all, the weather is dry, the water moisture in the atmosphere is very low, and the kinetic energy of electrons on the body of the trucks are very high, then you see differential starting voltage is very high, and slightest mistake, the voltage will cross each other, from there the outbreak could come up.

“We told them how they can wash the tankers the moment they have come because the static current glued upon the body of the tankers, they should wash all the body of the tankers, then wait and see that the stability of the tank and the content inside met with the initial position, so that everything is at rest, in order to do the discharging, that is if they are under pressure, but if they are not, it is from 12 midnight till 7 am in the morning, we told them when discharging, they should not sell in the filling station,” he stated.

Saidu fumed at some managers who declined the invitation when he said; “We have stubborn people, they are not paying for why we are sensitizing them, it’s to just drive from their stations to this place, and because they are managers they can not say they have fuel to put in their cars. The stubbornness is there, it is our mentality. It is something that we are telling you how you can protect your environment, protect your business and you declined to come.

“If government now frowns her face on them, the ones that refused to come will start crying and start talking nonsense to government thereby, disturbing government. They should change their wrong attitude and embrace the truth, our fire prevention staff, since they have refused to come, will go to them, and then now educate them effectively, if they drive away our staff, we will now deplore law enforcement agencies to deal with them decisively without opening our eyes.” He warned.

Earlier, the filling station managers, gave their challenges, citing harassment from operatives of the Department of State Security (DSS) that escort tankers drivers, forcing them to discharge fuel when the tankers are still hot.

In his response, the FCT Fire Service Head of fire prevention and protection, Timveh Jerry, assured the managers that he will make case for them and approach the Director of DSS, saying the issue is only a seasonal one, a directive from the Federal Government to guide against people diverting fuel to other places.