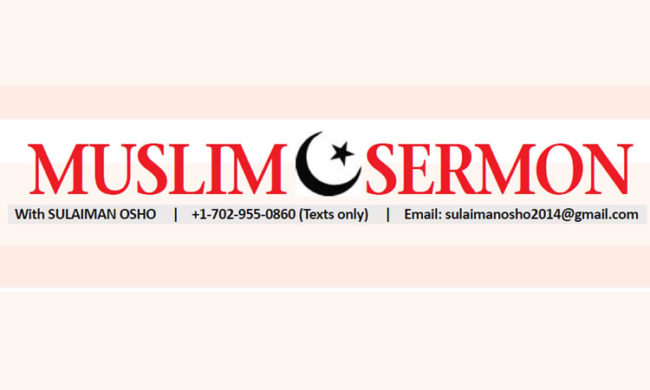 ENGLISH philosopher, Thomas Carlyle, in ‘Heroes, Hero Worship and the Heroic in History’ 1840, says on Prophet Muhammad (SAW), after much scientific investigations: “Europe has begun now to sense the wisdom of Muhammad and has developed a passion for his religion. It will also come to exonerate Islamic doctrine from all the false accusations laid at its door by Europeans in the Middle Ages. The religion of Muhammad will be the system upon which peace and contentment will be founded. From his philosophy, Europe will derive the solution to perplexities, problems and complexities… Many of my fellow countrymen and other Europeans venerate the teachings of Islam. Hence, I confirm my prophecy by saying that the first stirrings of the age of European Islam are near, this is inevitable. Yes, the world today is in dire need of a man like Muhammad to solve its complex problems. Muhammad was abstemious and simple in his abode, his food and his drink and his clothing and in the rest of his life and conditions. His food consisted mainly of bread with dates and water. He often mended his own clothes. What could be more honorable than this? Hail Muhammad the Prophet of rough clothing and food, who strived, was active during the day and awake during the night and persistent in promoting the religion of Allah. He was not one to covet that which lesser men covet such as rank, empire and power. He is in truth the Prophet of the sublime morals. A silent great soul – one that who could not but be earnest, he was to kindle the world as the Maker of the world had ordered so. The lies which well-meaning zeal has heaped round this man [Muhammad] are disgraceful to us only.”

In his book, “An Apology for Mohammed and the Koran” London 1869, John Davenport concludes on Prophet Muhammad (SAW): His simple eloquence, rendered impressive by the expression of a countenance wherein awfulness of majesty was tempered by an amiable sweetness, excited emotions of veneration and love; and he was gifted with that authoritative air of genius which alike influences the learned and commands the illiterate. As a friend and a parent, he exhibited the softest feelings of our nature… With all that simplicity which is so natural to a great mind, he performed the humbler offices whose homeliness it would be idle to conceal with pompous diction; even while Lord of Arabia, he mended his own shoes and coarse woolen garments, milked the ewes, swept the hearth, and kindled the fire, dates and water were his usual fare, and milk and honey his luxuries. When he travelled, he divided his morsel with his servant.”

Also, in his book, “Decline and Fall of the Roman Empire” 1823, Edward Gibbon notes: “The good sense of Mohammed despised the pomp of royalty. The Apostle of God submitted to the menial offices of the family; he kindled the fire; swept the floor; milked the ewes; and mended with his own hands his shoes and garments. Mohammed – was distinguished by the beauty of his person that was an outward gift, which is seldom despised, except by those to whom it has been refused. Before he spoke, the orator engaged on his side the affections whether of a public or a private audience. They applauded his commanding presence, his majestic aspect, his piercing eye, his gracious smile, his flowing beard, his countenance, which painted every sensation of his soul, and the gestures that enforced each expression of the tongue. In the familiar offices of life, he scrupulously adhered to the grave and ceremonious politeness of his country; his respectful attention to the rich and powerful was dignified by his condescension and affability to the poorest citizen of Mecca; his memory was capacious and retentive, his wit easy and social, his imagination sublime, his judgement clear, rapid and decisive. He possessed the courage both of thought and action; bears the stamp of an original and superior genius.”

Meanwhile, De Lacy O’Leary says in his book, ‘Islam at the Crossroads’ London, 1923 about Prophet Muhammad (SAW), “History makes it clear, however, that the legend of fanatical Muslims sweeping through the world and forcing Islam at the point of sword upon conquered races is one of the most fantastically absurd myths that historians have ever repeated.”

Lawrence E. Browne observes in his book, ‘The Prospects of Islam’ 1944, about Prophet Muhammad (SAW): “Incidentally these well-established facts dispose of the idea so widely fostered in Christian writings that the Muslims, wherever they went, forced people to accept Islam at the point of the sword.”

In his remarks on Prophet Muhammad (SAW), W. Montgomery Watt declares in his book, ‘Muhammad at Mecca’ Oxford, 1953: “To suppose Muhammad an impostor raises more problems than it solves. Moreover, none of the great figures of history is so poorly appreciated in the West as Muhammad…. Thus, not merely must we credit Muhammad with essential honesty and integrity of purpose, if we are to understand him at all. If we are to correct the errors we have inherited from the past, we must not forget that the conclusive proof is a much stricter requirement than a show of plausibility, and in a matter such as this, it is only to be attained with difficulty.”

In the book, ‘The Life of Muhammad’, orientalist, Emil Dirmargen, observes: “Muhammad, the Messenger of Islam, exhibited for most of his life if not all of his life a striking moderateness. His final victory points to a greatness of character rarely to be found in history. He ordered his army to give quarter to the old and the weak, the children and the women, and warned them against destroying houses or pillaging or cutting down fruiting trees. He ordered them not to draw their swords except in dire need. It is even said that he used to rebuke some of his generals and physically put right their mistakes.”

In their book, The Eastern World, the duo of Florandes and Marseille observe that: “Muhammad, the Messenger of Allah was courageous in fighting battles himself giving strength and endurance to the hearts of those who were weaker. He was merciful with the weak, and would give refuge to a great number of the needy in his house. Although he maintained a reverential aura, he had a plain manner about him with no affectation whatsoever. He was cheerful and easy to deal with and with an even temper not easily angered by inquisitive people and always had a smile on his face. There is no doubt that he had many traits which made him attractive to the people of his time, but he had conveyed to those people a sublime example in religion and morals, and transcended the old notions under which they were suffering. When he had gathered them as one body under the banner of this sublime example, he made from them a power, which later shook the very foundations of the Ancient world.”

English orientalist, Hollen Paul, notes that: “Muhammad, the messenger of Islam, possessed noble traits such as gentleness, bravery, and the noblest of morals. A person was not able to evaluate him without being affected by these attributes. Muhammad bore the enmity of his family and tribe for years without losing determination or strength. His nobility was such that he would never be the first to withdraw his hand from one who shook hands with him even from a child and he would never pass by a group of people men or children without giving a greeting of peace, all the while smiling sweetly and with beautiful words which would enchant, he who heard them and win his heart.”

May Almighty Allah continue shower His mercy and blessings on Prophet Muhammad (SAW), who came with the greatest miracle of the Holy Qur’an. Ameen.