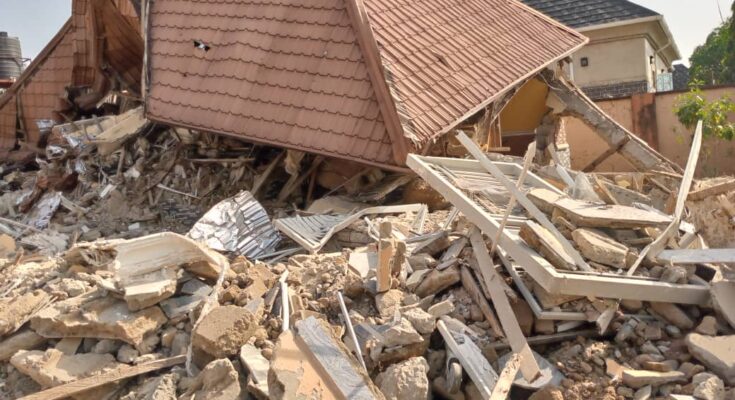 How AMMC Demolished My Abuja Based Private Clinic, Despite Ongoing Court Proceedings Over Land Dispute According to first hand verified source from “Mrs Christina Umolu” a medical practitioner and principal associate of the affected clinic property, who apparent does not reside, in the country but far- off united kingdom (UK).
Narrating her displeasure with the quite unfortunate circumstances,
She procured the land in question by the year 1993 as an allotee having followed legitimate procedure of payments, and was given official documents as the underlisted-
Conveyance letter dated with registered details
Proof of receipts issued in name of the bearer
Approved letter of Survey also in name of the bearer
Letter of acknowledgement for Right of Occupancy Howbeit in a twist of fate,After years of painstakingly setting up a thriving private medical outfit,
A Certain individual in person of “Mrs Juliet Ume Ezeoke” appeared out from nowhere with claims to being the rightful owner of the land where the hospital was built, and declared to have purchased the land as at the year 2020. This alleged bogus claims however was challenged by me in a swift reaction, hence a case proceeding was instituted at the High Court of the Federal Capital Territory. Based in Abuja.
-See Beneath Attached Details-
Ref {1Suit: CV/1894/202
Mrs Juliet Ibekaku Nwagwu Formerly known as Ume -Ezeoke Vs Dr. Ogunyemi Joseph Oluwatobi (Doing Bussiness under the name and Style LEAH JADA JOSEPH Hospital)
2.Judge:Justice V.S.Gaba
(Sitting as Presiding Judge FCT High Court )
22 Kwali,Now Kuje.Abuja. While the highlighted Suit above is ongoing, and yet to be given final pronouncement by the High Court,
it came to her as a rude shock and dismay when she received a notice of illegal structure and stipulated in the paper,was a deadline to comply with the removal or risk outright demolition of the said property on the protracted land in dispute.

(These letter of notice was served on the 8th of September, 2022 bearing the Official Header Of AMMC with reference tagged ‘DEMOLITION ORDER’) The bone of contention raised,on the said demolition order carried out by the Department of Development Control, through the Supervisory officer in charge on that fateful Day, (3rd of November 2022)was that it did not follow,due process in the discharge of its professional conduct,as all channel for communications between her superior(Mr Usman Galadinma) who was contacted and caught off-guard, upon receiving an emergency distress complaint about the intending demolition order to be effected by Mariam Usman, who led the team of officials from the Department of Development Control to the earmarked building.It even got much complicated when her boss placed several calls to Mariam’s line which undeniably rang countless times but the said Mariam Usman refused vehemently, sensing her boss might prevail on her to soft pedal , as she was nonetheless bent on pulling down the structure at all cost. Shedding more light,on intrigues played out from the demolition saga by Mrs Christina Umolu, is the alleged complicity amidst hesitant nature,of the officer who supervised the exercise coupled with her blantant refusal to follow official directive from her superior via calls, while in the course of duty connotes of a partial interest concieved by her which warrant a thorough inquiry or query on professional ethics with code of conduct violated in the line of official assignment as it appears obvious, hitherto elements of preferential treatment and arm twisting intricacies meted out to the chagrin of the affected victim in view, Despite the fact that an ongoing legal proceedings,in the High Court of the Federal Capital Territory with recourse to the particular land in quote.

Meanwhile in a bid to get to the root of the alleged demolition brouhaha,efforts to establish correspondence with the office of the Director(Department of Development Control). by the name Mr Muhktar Galadinma through his Mobile Number -[09099995983],as enclosed and that of the said supervisor Mariam Usman in quote proved abortive.
This leaves the pointer directed to the office of the Minister, Federal Capital Territory( F.C.T) Abuja,to take cognisant notice of this timely report on current developments trailing ,the high handed operational manner of the indicted office under the AMMC agency.We beckon on the esteemed office in capacity,of the Federal Minister Mohammed Musa Bello CON, to intervene and call the reported office to order, by not obstructing the course of justice with their alleged “complicity” as recourse to the pending subject matter which is yet to be affirmed in the favour of the claimant (Mrs Juliet Ume Ezeoke), via a pronounced judgement and valid court order,as their continued breach or actions can be likened to Contempt of the Court.

It is therefore expedient to call the erring Agency and its department to caution, by allowing the High Court decide the outcomes of the pending suit vested under its purview without unsolicited diversionary interference by AMMC( Abuja Metropolitan Management Council).
Prior to the publication of these incident a fact finding mission intensified, an online search for the official website “Www.Dodc.ng.com” and social media page of the Department of Development Control “Dodc@facebook page” in an effort to get an up to date records of their official operations,just as expected of a federal agency with such status.
The revelations of our discovery,
would leave you in high doubts of
their proficiency of the said Department in areas of record keeping on demolition exercises (Visuals) intermittently, except for one footage, which featured a demolition activity carried out against a defaulter’s plaza(ilobeto Crescent Wuse 2,Abuja) uploaded 18th November,2020 under the claims of not having a parking lot in the plaza’s premises as part of the required conditions mandated for the approval of the Structure by the Agency, in addition was a recorded interview granted to Nigerian Television Authority ( NTA) By the Director in person of Mr Muhktar Galadinma citing reasons for the pulling down of the defecting property in quote.
This is the only visual material posted on the Facebook official page dating back to 18th NOVEMBER,2020.

If these is the haphazard “Modus Operandi” routine deployed for dissemination of relevant updates on activities of the Agency and Department in view,then permit the following observations

How come the recent demolition
exercise carried out on the 3rd of November 2022 is conspicuously missing, and not uploaded on the Facebook portal same day the service was executed, given the fact that officials of the aforementioned department carried out the exercise during the operational hours of the Day?

The above raised question perhaps calls for a searchlight into the discrepancies,incurred on bases of orchestrated sinister motives which calls to doubts, and alludes the fact of how the Agency via its Department of Development Control run its affairs unchecked , subsequent to that of the November 3rd demolition incident on the land in contention, as not only illegal, but by extension on the grounds of lack of documented visual copy for verified sources,in line with previous demolition exercises done in the past,altogether culminates proof of an exercise shrouded in mystery.

The authenticity of the demolition order, carried out seems to be an act of gross intimidation, and calls for suspicion of vendetta seeking on part of the indicted Agency with the Supervisory officer “Mariam Usman” of the Department of Development Control,who at time of publication is yet to be questioned for her role and interest over actions that trailed the “drastic approach” on the demolition of the clinic edifice. Continue Reading