Home Update I can’t make that decision for Ayu, retrace your steps – Atiku replies Wike, Others 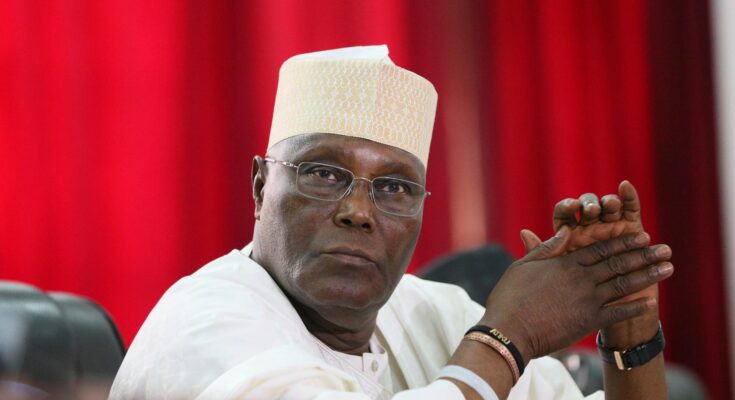 I can’t make that decision for Ayu, retrace your steps – Atiku replies Wike, Others

The Presidential candidate of the Peoples Democratic Party (PDP), former Vice President, Atiku Abubakar said the call for the party’s National Chairman, Iyorchia Ayu resignation is a decision that only he can consider.

Rivers State Governor, Nyesom Wike and some other Southerners pulled out of Atiku’s campaign.

They demanded that Ayu should resign for a Southern to take over before they can join Atiku’s campaign.

Atiku in a statement Wednesday said he was surprised at the action of Wike and others to withdraw from his campaign.

The former Vice President insisted that if Ayu is to be removed from office, it must be done in accordance with the laws.

“It is time, therefore, to move on with the formidable tasks of nation building ahead of us, Atiku noted.

The statement read in part “early this morning, my attention was drawn to a news clip in which several very senior and influential members of our great party, the Peoples Democratic Party (PDP), addressed the press and, amongst other things, declared that they are withdrawing, forthwith, from the Presidential Campaign Council set up by our party to judiciously plan and prosecute the general elections set to hold in February and March 2023, on the one hand; and reiterated their earlier calls for the resignation or removal from office of the national chairman of our party, Senator Dr. Iyorchia Ayu, on the other hand.

“The people that addressed the press must have their reasons for withdrawing from the Presidential Campaign Council, and I will not speculate as to what those reasons may be.

“Personally, I am quite surprised with this withdrawal because, as I have been informed by officials of our party, apart from the Rivers State chapter of the PDP, all the remaining states of the federation submitted names of people who they wanted included in the Presidential Campaign Council.

“On the calls for the resignation or removal from office of our national chairman, however, I must reiterate what I have said severally in public and in private; the decision for Dr. Iyorchia Ayu to resign from office is personal to Dr. Ayu and, neither I nor anyone else can make that decision for him.

“As to the calls for the removal of Dr. Ayu from office, however, I will state that, as a committed democrat and firm believer in the rule of law and democratic tenets, and our party being one set up, organized and regulated by law and our constitution, it is my absolute belief that everything that we do in our party must be done in accordance with, and conformity to, the law and our constitution.

“If Dr. Ayu is to be removed from office, it must be done in accordance with the laws that set out the basis for such removal. In any event, you will all recall that the very body that is empowered by law to initiate this removal from office, has already passed a vote of confidence in him.

“Now, our nation is currently in the throes of a multidimensional crisis encompassing insecurity, economic meltdown, disunity and mutual mistrust and educational dislocations, to mention a few. I have a plan to address these issues and I have, graciously, been given the ticket to lead our great party in next year’s presidential elections, with the singular mandate to come and lead the efforts to cure these ills. It is in this light that I have reached out to every single member of our great party to join me in the massive undertaking required to reset the ship of state, and help rebuild our country. Every single person who loves this country, as I do, is needed for the arduous tasks that face us ahead as a nation, and this includes every member of the PDP.

“And it is my fervent hope and prayer that every man and woman of goodwill will join hands with us to help rebuild and reposition our beloved country. In this light, therefore, I will urge those members of our party that have stated their resolve to withdraw from the Presidential Campaign Council to have a rethink, retrace their steps, and join us in these efforts.

“The above notwithstanding, and for the sake of our country, our children, and those yet unborn, we must not, for one minute, shirk in our responsibilities to rebuild this beloved country of ours”. Continue Reading