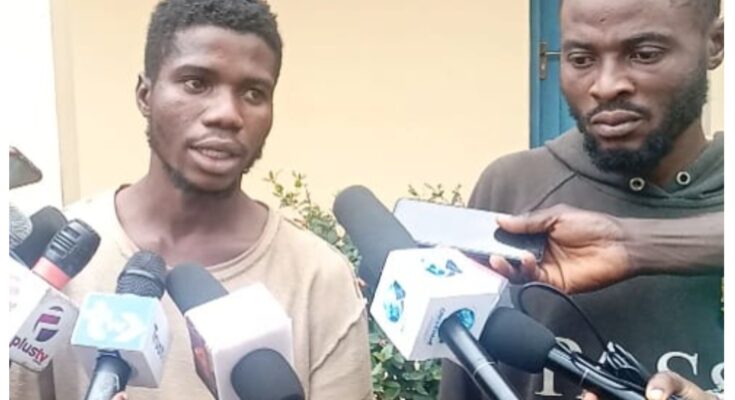 I killed friend for oppressing me with Yahoo-Yahoo proceeds – Tailor A tailor and part-time commercial motorcyclist, Wahab Hammed, was recently paraded by the Osun State Police Command, alongside his friend, Ayobami Adegoke, for allegedly killing a fellow suspected Internet fraudster, Wasiu Oguntade, in Modakeke, Osun State. In this interview with BOLA BAMIGBOLA, Hammed explains what transpired

Where are you from and what do you do for a living?

I am a resident of Modakeke, Osun State. I am a tailor. But whenever I don’t have work to do in my shop, I usually engage in commercial motorcycle operation. I am a native of Modakeke. I attended secondary school but dropped out when I was in SS2.

Why did you stop schooling?

It is a long story. I just stopped for some reasons I don’t want to disclose.

I used to have a wife but she left me because I had an accident and the doctor handling my treatment said one of my hands would be amputated. When she heard that, she started misbehaving. I have a child through the marriage.

Why were you arrested?

We were arrested for killing my friend, Wasiu Oguntade. I was arrested with Ayobami (Adegoke) another friend of mine.

Who was Wasiu and what led to his death?

Wasiu was a friend to Sodiq, who is another friend of mine. So, I got to know him through Sodiq. Wasiu was a Yahoo boy and he had been doing it before we got to know each other about a year and three months ago.  He was my friend too.

Why and how did you kill him?

What happened was that Ayobami and I killed Wasiu because he was always oppressing me with the proceeds of his Yahoo Yahoo activities. He was making good money from Yahoo Yahoo. I was into it too, but I was not so lucky. Whenever he made good money, he would come to me and be flaunting it. At times, he would even send me on errand because of the money he had made. One day, an evil plan formed in my mind and I decided to collect money from him. I didn’t plan to kill him.

What did you do?

The incident happened on Sunday, August 8, this year. We took him to a location far from our residential area in Modakeke under the guise of wanting to sell a parcel of land to him. He had informed me that he wanted to buy land and I told him that I had someone that could get a good location for him.

I got to know Ayo in town, while working as a commercial motorcyclist. We became friends because we were both commercial motorcyclists. I used to tell Ayo everything that was going on between Wasiu and me; how he was oppressing me with proceeds of the Yahoo Yahoo and all that. It was Ayo that suggested an idea that we could use to obtain money from him.

So when Wasiu called me that Sunday that he was ready to go and see the land I told him we had found, I immediately informed Ayo and he said I should bring him. Wasiu, Ayo and I went to a place a bit far from the residential area in Modakeke. We went on Wasiu’s motorcycle. Wasiu rode the motorcycle, while Ayo gave him the direction to follow. When we got to our destination, Ayo showed Wasiu the land and he checked round. He told us he would think about it before deciding what to do. He also said he would pay in installments. We were about to leave the area when Ayo held Wasiu from the back and hit him with a machete, cutting his head.

What do you mean cutting his head?

It was Ayo that killed him but I was present at the scene.

How were you arrested?

I went to Ipetumodu Police Station to report myself because Wasiu’s friend had called his line and Ayo was the one that picked the call and lied that Wasiu was involved in an accident in Ipetumodu.

We both went to the police station and my conscience was troubling me, because that was my first time of doing such a horrible thing. People were already suspecting me. Wasiu’s wife mentioned my name, that her husband told her he was coming to see me. But because Ayo lied that Wasiu was involved in accident in Ipetumodu, I thought that would cover me.

When we got to Ipetumodu, Wasiu’s wife and his friend were with us. An Amotekun operative that saw us wandering around stopped us. He asked us what we were looking for and Ayo explained that we were looking for someone that had an accident, but the man said I was the first suspect because the missing person said he was coming to see me.

The Amotekun man, after asking few questions, said we should go to the police station to report and he immediately declared me the first suspect since I was the person that Wasiu told his wife he wanted to go and see before he went missing.

What happened at the police station?

When I got there, I could no longer hide what we did. I confessed to the police that Wasiu had been killed. Actually, we didn’t plan to kill him. We only planned to collect money from him but he didn’t bring money to the site as we had hoped. Again, Ayo felt he was suspecting us too. I never told Ayo to kill him and what he told me was that he did it because Wasiu was already suspecting us.

Why didn’t you stop Ayo from killing him?

It happened too suddenly; I didn’t expect it, since we didn’t plan to kill him. I had a burden on my conscience and that was why I had to confess, more so, because Wasiu’s  wife and his friend were already insinuating that I could have put Wasiu in danger since I was the one he told them he wanted to visit. There was no way I could free myself from that allegation.

What happened after you confessed?

I knew I was in trouble when I was arrested. So, I just owned up and my conscience felt lighter. Continue Reading