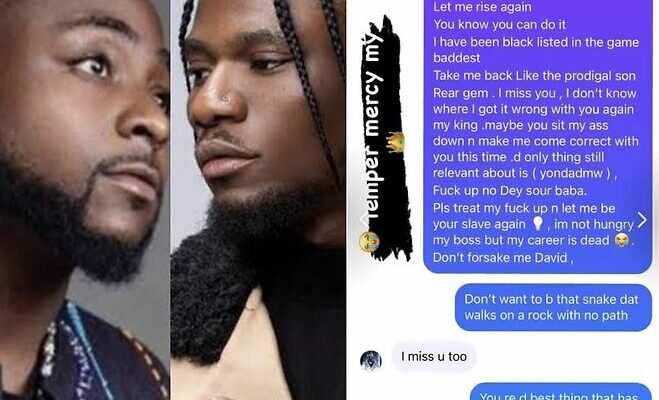 I want to be your slave again, ex-DMW signee, Yonda, begs Davido

Nigerian music artiste and former Davido Music Worldwide (DMW) record label signee, Adeniran Adetunji, better known as Yonda, has appealed to his former boss, Davido, to forgive and take him back to his music label.

Although nothing official has been said about their breakup, the estranged DMW act, who is regarded as one of the best songwriters in the country, has not been seen around Davido or the label recently.

According to him, Davido is the best thing that ever happened to him and he doesn’t mind becoming the slave of the ‘Stand strong’ crooner once again.

He revealed that, ever since he left Davido’s label, he has been blacklisted in the music industry, adding that his music career is dead.

The screenshot read, “Baddest don’t leave me hanging pls let me rise again, you know you can do it. I have been blacklisted in the game baddest. Take me back like the prodigal son rear (sic) gem. I miss you, I don’t know where I got it wrong with you again my king. Maybe you sit my a$$ down and make me come correct with you this time.

“The only thing still relevant about is (yondadmw), fuck up no Dey sour baba. Pls treat my, fuck up and let me be your slave again, I’m not hungry my boss but my career is dead Don’t forsake me, David

“Don’t want to be that snake that walks on a rock with no path. You’re the best thing that has happened to me.”

Captioning the screenshot, he wrote, “If I could turn the hands of time, If wishes were horses, beggars would ride, wish I could make you forget the ungrateful me, irrational me, e.t.c just to start all over again with you my KING @davido.”

Replying to his plea, Davido said he misses him too but was greatly hurt by his actions.