Home Politics I will tackle insecurity, unemployment, others, says Atiku 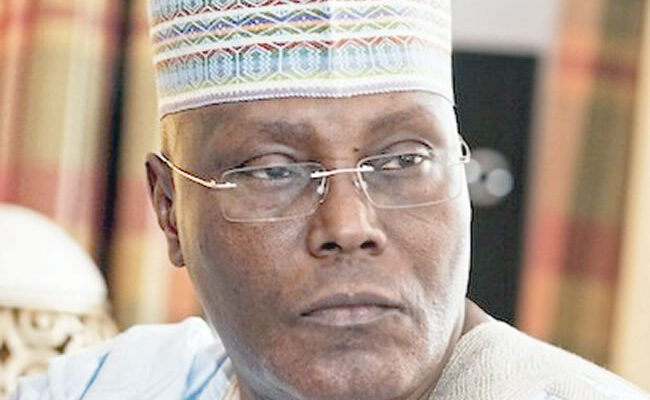 I will tackle insecurity, unemployment, others, says Atiku

Ahead of the 2023 presidential elections, the presidential candidate of the People’s Democratic Party (PDP), Alhaji Atiku Abubakar, has promised to fight insecurity in the country and revamp the ailing economy if elected president of Nigeria.

Atiku made the promise while speaking at the presidential rally in Jos, Plateau state, on Tuesday, and further promised to carry the youths along and provide a good source of livelihood for them.

He berated the All Progressive Congress(APC)-led administration at the centre for neglecting all the roads linking one state to another in the country and promised to give them adequate attention if elected in 2023.

The former Vice President, who described his campaign in Plateau State as “homecoming,” said Plateau state is historical when it comes to the political evolution of Nigeria, adding that virtually all the past presidents of Nigeria got their mandate in Jos before they were elected.

His words: “We promise, if you vote for PDP, we promise to restore peace to Plateau state and the entire country. We would revamp the economy, bring about development, and also link those roads with your neighbouring states through comprehensive rehabilitation.

“Coming to Plateau today is a homecoming to me because I have been a resident of this state for 28 years. We would restore peace to this state, and we would also revamp the economy. We would also make sure that this state is connected to neighbouring states as far as road infrastructure is concerned.

“APC has neglected all the roads connecting the Plateau with other states in the country. I want you to promise me that you are going to return PDP to Plateau state and at the national level.”

The Vice Presidential candidate, Senator Ifeanyi Okowa, who assured that Nigeria will rise again, stated that PDP in the past had given Nigeria good governance and leaders at all levels, adding that if voted into power at all levels in 2023 if elected, the party will turn things around.

He added that the presidential candidate of the party, Atiku Abubakar, is a father with compassion who has been therefore and understands the terrain.

Also, the National Chairman of the party, Senator Iyorcha Ayu, who said no single individual owns the PDP, urged all party faithful to team up to build the party and the country.

“The crack in the Plateau PDP is over; thank the likes of Jang, Useini, Kwande, and others; they have reunited, and I want their followers as well to reunite. The PDP is today a rock nobody can dislodge on the plateau again. This is a party that will reconstruct Nigeria. PDP will not close universities for a day; education will be given a priority.”

The Chairman of the Presidential Campaign Council, Governor Udom Emmanuel Udom of Cross Rivers State, who assured that PDP will form the next government at all levels, said the change APC brought has turned to hunger and frustration.

He appealed to the people of Plateau state to vote en masse for the PDP to address the situation, adding that potatoes, which are in abundance in the state, can feed the entire continent of West Africa if properly harnessed and given adequate priority.

The Director-General of the campaign organization, Governor Aminu Tambuwal, said the presidential candidate, with his vast experience, will restore the lost glory of Nigeria and enjoined the people of Plateau to vote for the party at all levels.

The presidential candidate of the party arrived at the venue of the rally and was received by a mammoth crowd.

On his arrival, Alhaji Atiku Abubakar and his entourage had earlier visited prominent people, including religious leaders in the state. Some of those visited include the Anglican Bishop of Jos, Bishop Benjamin Kwashi; Shiek Yahaya Jingir, the paramount ruler of Jos; the Gbong-Gwom of Jos; and other prominent personalities.

Tribune Online learnt that the presidential candidate and his running mate also held a meeting with some prominent PDP stakeholders in the state over the lingering crisis rocking the party.

It was further learnt that at the end of the meeting various warring group agreed to sheath their swords and work together for the success of the party in the coming elections.