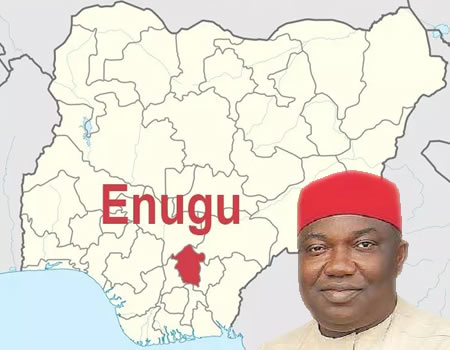 Worried by the recent spate of security challenges in Enugu State, the members of the Enugu State House of Assembly have called on the state government led by Governor Ifeanyi Ugwuanyi to rise to the occasion.

According to the House, the state government should, with immediate effect, set up and equip a joint military, police, forest guards, Neigbourhood Watch to decisively tackle the “menace once and for all,” especially as Christmas and New Year holidays approach.

The call came through a motion of urgent public importance moved by the member representing Oji River State Constituency, Jeff Mbah at the plenary session on Tuesday.

Presenting the motion, Mbah recounted incidences of violent crimes that were committed in various communities in recent times especially the gruesome murder of a former commissioner, Gab Onuzulike and his brother at Oji River, and many senseless killings and kidnappings in Eha-Amufu, Igbo-Eze North Local Government Area, as well as the kidnappings in Opi-Ugwogo and Four Corner Roads.

“Mr Speaker, honourable colleagues, the surge in insecurity in Enugu State has called for urgent and decisive action. Unfortunately, notwithstanding the known enormous hard-earned resources that His Excellency, the Governor of Enugu State has applied to ensure the safety of the lives and properties of the good people of Enugu State, the unthinkable continues to happen.

“The recent gruesome murder of the former Commissioner of Rural Development, Enugu State, Hon. Ozo Gab in Oji River alongside his elder brother; the killings in Igbo-Eze North and Isi Uzo LGA are umpteenth times in such reports,” he lamented.

Mbah said that if nothing drastic is done, there is every tendency that the fear of insecurity might deter many from coming home for Christmas and New Year.

Members who contributed to motion frowned at the unbearable security situation and agreed with Mbah that indeed something has to be done to remedy the situation.

Leader of the House, Hon. Ikechukwu Ezeugwu while condemning the spate of crime and criminality in the state, said that what obtained in Afghanistan many years ago is what is happening in the state, pointing out that ownership of small arms and weapons by youths in the communities gave rise to crime.