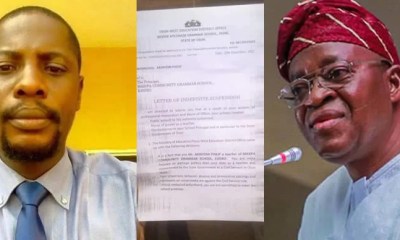 Akinyemi was in December 2021 suspended indefinitely for posting “abusive” comments and pictures against the Governor of the state, Gboyega Oyetola, on social media.

When Nationnewslead visited his Facebook page at that time, his posts were in favour of The Osun Progressives, a faction of the All progressives Congress loyal to the Minister of Interior, Rauf Aregbesola, in the state.

While Aregbesola is backing TOP, Oyetola belongs to another faction called IleriOluwa.

The Special Adviser to Governor Oyetola on Education, Jamiu Olawunmi, confirmed the teacher’s reinstatement to our correspondent on Wednesday.

Also, the teacher confirmed his reinstatement to our correspondent on the telephone.

When asked if his political position has changed, the teacher said, “I am now neutral.”

“It is true that I have been reinstated. I am happy and I thank the government,” he added.

On his part, Olawunmi said the teacher was reinstated after showing remorse.

He said, “The essence of punishment is to reform not destroy. Suspending him is to t reform him and make him be of good conduct and respect the office of the governor.

He should not be a bad example by abusing the governor, but since he has shown remorseand stakeholders have intervened, he has been reinstated to continue his job.”

In the suspension letter, the teacher was alleged to have breached the state’s Civil Service Rule.

Akinyemi, who was queried earlier on December 8 for “disrespecting” the governor on Facebook, was one of the witnesses of APC at the election petition tribunal in 2019 during the case between Oyetola and the governorship candidate of the Peoples Democratic Party, Ademola Adeleke.

A copy of his suspension letter dated December 20, 2021, and signed by E. O. Onatola, read, “I am directed to inform you that as a result of your actions of professional misconduct and abuse of Office, your actions created public assault to the authority concerned.

“The Ministry of Education/Osun West Education District Office came up with the following decisions:

“It is a fact that you Mr. AKINYEMI PHILIP a teacher of Masifa Community Grammar, Ejigbo. You are more focused on partisan politics than your duty as a teacher and commitment to the State Government as a Civil Servant in Osun State.

“Your unpatriotic behavior, abusive and provocative postings, and comments on social media are against the Civil Service rule. Unless contacted beforehand, you are not permitted to enter the school premises.”

When our correspondent visited Akinyemi’s Facebook page, it was observed that the teacher, who is a staunch member of APC, had posts promoting TOP.

Part of the query letter read, “Your postings and comments on social media for some time have been inciting and have shown that you have derailed from what you were employed to do as a teacher. You are more focused on partisan politics than your duty as a teacher and commitment to the State Government as a Civil Servant in Osun State.

“Your comments and postings have shown a great disrespect to State Government and the Governor that is committed to a regular payment of wages and salaries.” Continue Reading