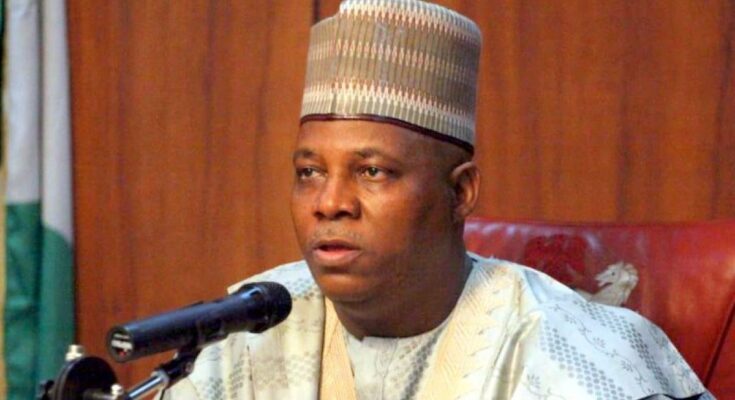 By now, the vice presidential candidate of the All Progressives Congress, Kashim Shetima must have realised the negative effect his saying that his principal, Chief Bola Ahmed Tinubu is the only candidate with a dose of hospitality like former military ruler, late Sani Abacha, has on his party.

Like most Nigerians have said, Shetima’s comparison of Tinubu with the late Gen Abacha whose regime many feel remains the worst junta, is quite unfortunate especially knowing that it was same dictator who sent Tinubu on exile.

Unknowingly, Shetima has only succeeded in offering Nigerians window to attack his party.
While speaking at the 96th anniversary celebration of the Yoruba Tennis Club in Ikoyi, Lagos, held on Thursday, Shetima also stated that Tinubu has the kind of commitment President Muhammadu Buhari has in getting things done, the humility and generosity of spirit of General Yakubu Gowon, as well as the work ethics and broad-mindedness of ex-president Olusegun Obasanjo.

He also referenced other former military rulers such as Generals Ibrahim Babangida and Abdulsalami Abubakar. He has been, as expected, receiving more knocks than accolades for such statements for the fact that if all the past rulers he mentioned did excellently as he tried to extol them, why is Nigeria in a sorry state.

The APC Vice presidential candidate’s unfortunate utterance about his principal, made the list of trending issues on Arise TV’s ‘Trending With Ojy Okpe’ and Dr Reuben Abati did not mince words in condemning the comparison.

Dr Abati noted that while it’s expected that Shetima will sell his principal as the best candidate for the job, which is of course, standard political rhetoric, “Many people may disagree with him in terms of characterisation of former Nigerian leaders.

Incidentally, he left out President Jonathan and Umar Musa Yar’Adua and focused on military leaders. So, that characterisation may be controversial to some people. For example, ‘the dose of hospitality of Gen Sani Abacha’, a symbol of hospitality in Gen Abacha is that people had to flee from this country including babies who were targeted as victims of a draconian regime.

On the reference to work ethic and broad-mindedness of Gen Obasanjo, Abati pointed out that, “It was okay, because we all will admit that Obasanjo was very hard working handsome General.

Then the maradonic skill of Gen Babangida, the same maradonic skills that Nigerians were against at that time and they thought was a source of problem for Nigeria. So, there could be arguments over characterisation but Nigerians are not looking for a repeat of the old regime; he probably needs to be informed.

“Nigerians, more than at any time in Nigerian history, want change; they want a leader who can move this country forward. He should have devoted his energy to telling us specific things, that’s what we want to hear now; what he and his principal will do when they get there.

“In terms of realities, he was speaking at a time when National Bureau of statistics was announcing inflation figure of over 20 percent. Instead he was talking about hospitality of Gen Abacha, in fact, that kind of campaign tactics can even offend people and turn them against you”.

“A lot of people are saying that he dropped the ball here with that comparison”, Ojy Okpe said, adding that “basically, he is saying that Tinubu is a compilation of all the past leaders- our past leaders. So why would we want him in power if Nigeria is like this?”.

”What an astonishingly…I was going to say something quite impolite and I would just stop there”, Tundu Abiola on same show, obviously pissed-off by Shetima’s utterance, began saying. “What on earth was he thinking to utter such a statement? Apart from the fact that he just damned Abacha with fate praise because if you noticed, he was actually fulsome in praising the other leaders but with Abacha, he couldn’t find anything to say so, he said ‘hospitality’, that just shows you he was trying to rack his brain”.

She further noted that Shetima’s situation at that point in time shows that sometimes it’s better to say nothing than to babble. Continuing she said, “To use the word ‘hospitality’ when Abacha had so many unwilling guests he kept against their will is a slap in the face.

If the past leaders Shetima made reference to were all so relevant, so influential or consequential, Nigeria would not be where it is today and this is exactly why they have been rejected by the electorates because they’re completely out of touch and retrogressive.

“Let us face the future and look forward to the dazzling future of this country not continuing to hearken back people that destroyed us, brought us to our knees. That is a truly awful thing that he said”. Continue Reading