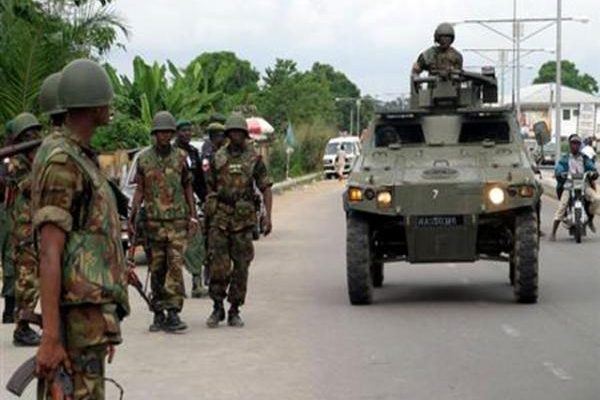 A lady, Damiete Green, is in critical condition at the University Port Harcourt Teaching Hospital (UPTH), Rivers state, writhing in pains of gunshots after a soldier shooting indiscriminately at fleeing transporter of illegally refined products fired at a wrong vehicle conveying her.

The shooter, identified as Sgt Yinka Ayileka, is said to be one of a team of Army guards attached to the Port Harcourt Maximum Security Custodial Center on Harbour Road, Township Ares who are known for abandoning their core duty to state illegal road checkpoints where they collect tolls from motorist and illegal fuel carriers in the neighborhood.

Eyewitness said the incident on Tuesday occurred close to popular Rachael Hotel in area where the Army guards watching over the maximum prison had mounted the illegal checkpoints, resulting in the unfortunate shooting of 25 old Green

Sources narrated that the reckless shooting started when a Toyota Camry car suspected to be conveying illegally refined petroleum product, better known as ‘kpofire’ in the locality, refused to pay the usual ‘toll’ to the security team at the illegal checkpoint.

A source narrated, “The soldier pursued the car and jumped on the bonnet. When the driver refused to stop, he opened fire and started shooting indiscriminately. There were several vehicles trapped in the gridlock caused by the checkpoint and the victim was in one of those, a Lexus 330 salon.”

The driver of the Lexus who was helping to give Green and other occupants who reside in the same neighborhood free ride home confirmed that bullets from the reckless shooting soldier’s gun went through the back passenger door, lodging into back of the Green who sat with another passenger.

Deputy Superintendent of Corrections, Juliet Ofoni, Spokesperson, Nigeria Correctional Service, Rivers Command, also contacted to confirm the incident and the military guards at the custodial center involved in the shooting, equally asked to be given space to check and get back at the time of filing this report.

Meanwhile, the victim, under medicare at crowded Emergency Unit of UPTH, lamented that, “I was scheduled for surgery on Thursday but till now (Friday evening) nothing has happened.

Before the referral to UPTH, some pallets were said to have been extracted from the victim at the Rivers State University Teaching Hospital (BMH) on the fateful Tuesday the incident happened, leaving most remaining bullets still embedded in her back, and spine area.

Sympathizers and friends suspect attempt by security operatives to sweep an extrajudicial shooting under the carpet, by blaming the incident on stray bullets during alleged cult gangs’ clash in the area.

“It is very painful that the media could be used to spread a blatant lie to hide the evil done by the soldier who was on illegal duty at the post. Nigerians should help us get justice and to ensure that our sister does not die.”, they appealed. Continue Reading