Home Education Many CSOs are PDP members in disguise – Keyamo 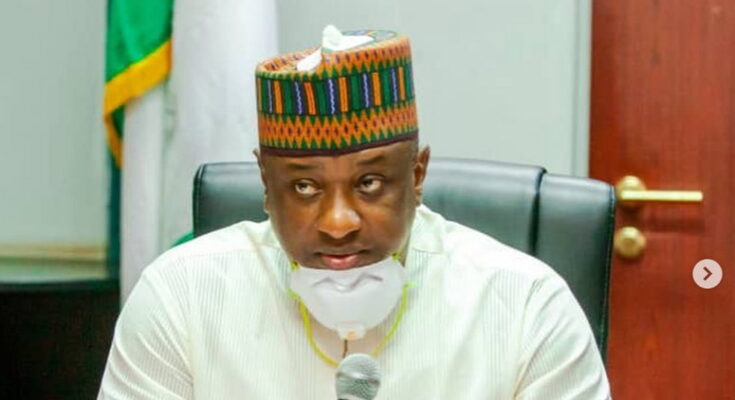 Many CSOs are PDP members in disguise – Keyamo The Minister of State for Labour, Employment and Productivity, Festus Keyamo, who also doubles as spokesperson for the Tinubu Presidential Campaign Council, speaks to DEBORAH TOLU-KOLAWOLE and SOLOMON ODENIYI on the achievements of the current regime and responds to the criticism by the opposition

Are you considering resigning as a minister following calls in some quarters?

Without meaning to demean these civil society organisations, I have noticed some disturbing trends from 2015 till date. It heightened in 2019 when we discovered that many of them worked for the opposition party, disguised as CSOs. We even identified some individuals amongst them who had contested offices before under the Peoples Democratic Party.

I believe that is a call made by the opposition disguised as CSOs. We didn’t hear any noise when some ministers in the past were part of the campaign councils of the opposition party when they were in power.

Kabiru Turaki was the Minister of Special Duties at that time but served as the Deputy Director North of the Jonathan Campaign team, among others. I am a member of the All Progressives Congress. The party also takes part of my salary to pay my dues. It is deducted from the source. So I’m entitled to take part in party activities. It could be likened to extracurricular activities.

There is no conflict of interest because I am not using the ministry resources to run this. Also, Section 84 (12) (of the Electoral Act says public officers should resign when they want to participate in political activities, which include running for office, among others, but the section does not include party activities like this, and my kind of duties are not affected.

Many Nigerians who had high hopes for this regime and voted massively for Buhari have been expressing their disappointment. Don’t you see this affecting the chances of Tinubu in 2023?

This regime has achieved quite a lot, and the achievements are well documented in a 73-page document. We called it a factsheet and commissioned it for this campaign.

Legislative reforms, such as the Electoral Act amendment bill, affect every sector. We passed that bill and the President signed it to bring about a revolution in the electoral process in Nigeria.

There is also the Petroleum Industrial Bill that has been on the shelf for a long time before this administration. It became a law in this regime, and this has led to the privatisation of the NNPC. Privatisation does not mean selling it off to individuals. So, there is a difference between Atiku’s plans and the one we did. The government has a substantial interest and ownership in it.

We have also done well in the area of infrastructure. The railways, airports, and seaports are there for everyone to see.  We had five ministers of aviation from the South-East. They didn’t touch runways that were bad in the Southeast. It was Buhari that shut down Enugu airport and gave it one of the best runways we have in the country. The second Niger Bridge was in a drawing on the table for years. The President had to remove it from the normal budgetary circle and create a special fund for it. If not that, it won’t be completed. By the end of the year, he will be able to inaugurate the project.

And you have a situation where the masses are always sucked in by high-falutin words and phrases. When you repeat this over and over again without bringing them back to the specifics, it stays. What are these high-falutin phrases? They are as follows: the government has collapsed; the government has failed; this country is a joke; and so on.

However, the facts on the ground do not support some of these things. Let me tell you this, the opposition are having a good time all over the world, not only in Nigeria, because the world is experiencing an economic crisis.

But for us to catch the opposition, we must say that, in the face of the economic crisis, we didn’t adopt a policy that didn’t work. You must drag them into these policies. If they drag us into the noise, they will win, but if we drag them back into specifics, they will lose, but they want the noise.

For example, they are shouting that the prices of goods have risen, but what do the facts say? We managed to contain inflation more than even the major countries in the world. We are doing 19% now, which is higher than, for example, Spain, where it is about 10%, which is lower than 19%, but Spain was 0.32% before. They had a 10% rise, while we had a five percent rise. We managed to keep inflation down better.

The United States has an 8% increase. It could have been worse for Nigeria if policies were not put in place to check the inflationary trend. What are these policies? Food prices are a major component of inflation. If we had not gone back to agriculture quickly, you know our earnings in agriculture have gone up in the last seven years, but it would have been better if we didn’t have the farmers-herders crisis still pushing the food production down in some food baskets of the nation. The agriculture we went back to and the rice and other staple food products we went back to helped us a lot.

We would have compounded this problem now by looking for dollars to import rice into the country. Egypt is in trouble now because they depend heavily on Ukraine and Russia for their staple food, which is wheat. That is why I laughed at ignorant people who mocked my presidential candidate when he mentioned corn, yam, and cassava. He was actually touching the core of our problems. What he said was a euphemism for going back to the production of our staple foods and being self-sufficient in them.

Despite all you have carried out, many Nigerians and the opposition party believe this regime has failed and that the PDP is on a rescue mission. What do you say to that?

Rescue who? Have they rescued themselves? Are you not seeing the problems they are confronted with? The party is in tatters. They just adopted this phrase to deceive Nigerians. I am not trying to give excuses. Excuses are when you give reasons not to perform, but when you say this within the context of what you meant, on the ground, you have achieved something; it’s no longer an excuse. You are just stating the facts. For example, the last time the world was shut down was in 2019. It was only God that knew we would have a pandemic when we were campaigning in 2019 and then our GDP under Jonathan was 6.4 in 2013/2014 and started a rapid decline from then on. Our GDP was about 2.(something) when they handed it over to us. The meaning of that is that there was a free fall in the economy. Okonjo Iweala told everybody that we were headed for a recession.

Six months after we took over, the country slipped into recession. Jonathan was already borrowing to pay his salary. 14 states could not pay salaries at that time before the Federal Government started the bailout under Buhari.

In terms of actual facts and statistics, we are not running away from the problem we face. We are admitting, but we are only saying that it was in the face of this problem that we dug in and did all you are seeing. We started the rail revolution and the infrastructural revolution.

Of course, we cannot build all the roads in the country, but go and look at the Lagos-Ibadan road that was a subject of litigation for many years.

Despite the killings and abductions across the country and, of course, the train attack, would you also say this regime did well in the area of security?

We met security challenges on the ground. I saw headlines that misrepresented me where they quoted me as saying terrorists have been reduced to nothing. I did not say so. I simply said Boko Haram in the North-East has not been totally wiped out, but they have been significantly decimated in the North-East. It is a fact, but the opposition hates to hear this and wraps it up by saying insecurity is killing Nigerians. We met 14 local government areas taken over by terrorists.

At one point, elections were postponed because they could not be held in those areas in 2015. As of today, Boko Haram terrorists are still in skirmishes, but because of our strong diplomatic moves with neighbouring countries, we were able to box Boko Haram in.

Also, the world terrorism index stated that farmer-herder clashes came to a head between 2017 and 2020; after 2020, the crisis has reduced considerably.  What made it reduced was as a result of the National Livestock Transformational Programme, which the government decided to implement. This was a problem that had been there since the 1960s.  We have tried to reduce the problems with this programme, but they are not totally wiped out.

However, while we were doing this, new challenges reared their heads. We acknowledge the banditry issue. We also admit the kidnapping problem. But are we throwing up our hands and saying that there is no hope? No, we are not.

We took out time to tackle farmers-herders and Boko Haram. We are taking our time to tackle kidnapping and banditry as well. People are saying we bought a lot of equipment like the Super Tucano and why have we not wiped it out? What people don’t know is that once they sell equipment like this to you, there are rules of engagement. If you use them anyhow without following the rules, they won’t sell equipment to you again. Nigerians should know that you cannot just deploy them as you like. The security agencies are very careful about that.

What about IPOB in the South East?

The IPOB issue in the South-East has now been reduced because all of them are now campaigning for a candidate, which is our happiness. We want everyone to come back to the terrain. We are happy to welcome them back to the country in one fold. We encourage them to let us play politics together and allow the best to win. Continue Reading