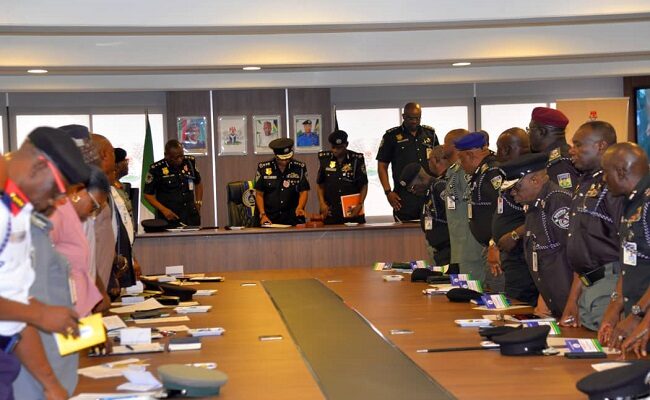 Military, Police, DSS heads of operations, others meet in Abuja

Ahead of the forthcoming General Elections, the Inspector-General of Police, IGP Usman Alkali Baba, on Tuesday engaged in tactical meetings and conferences with various security stakeholders with all heads of operations of national security agencies in the country towards having a successful and credible poll.

This was contained in a statement made available to newsmen in Abuja by the Force Public Relations Officer, FPRO, CSP Olumuyiwa Adejobi.

According to the statement, the meetings were “in line with the commitment of President Muhammadu Buhari, to leaving a legacy of a deepened democratic system and credible electoral process in the nation.”

It added that the tactical meetings and conferences with the various stakeholders also became necessary “in order to build solid standard operating procedure and strategic communication action plan geared towards having a seamless electoral process for the 2023 general elections.”

According to the statement, “at the meeting, the IGP emphasized the need to enhance actionable intelligence gathering and sharing, coordinated operations, and adequate deployment of personnel and resources by all relevant security agencies and stakeholders in the election process.”

It added that in the same vein, the IGP has called on the Nigeria Police spokespersons, at the 2022 Police Public Relations Officers’ Conference currently ongoing in Ibadan, Oyo State, to develop and implement a productive Strategic Communication Action Plan that will give leverage to the already established operational drives of the Police to have a free, fair and credible election in 2023.

According to it, “the IGP, who spoke through the Deputy Inspector-General of Police in charge of the Force Criminal Investigations Department (FCID), DIG Johnson Babatunde Kokumo admonished the Police PROs to exhibit their skills in strategic communication to stem the pockets of electoral conflicts and violence being experienced across the country, as such could be a general panacea for security challenges in Nigeria.”

The PPROs Conference themed ‘Strengthening Strategic Communication Towards 4Police Reforms, Security and Integrity of 2023 Election’, which the opening ceremony held at Kakanfo Inn, Ibadan on Monday, December 12, 2022, would come to a close on Thursday.