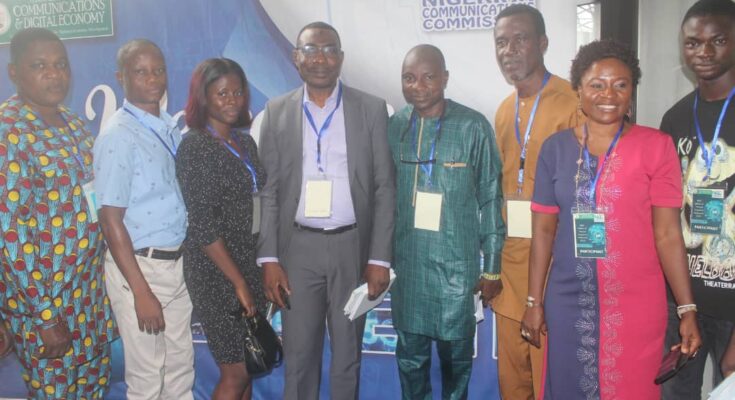 The Nigerian Telecommunications Subscriber advocacy body under adgis of the Association of Telephone, Cable TV and Internet Subscribers of Nigeria, (ATCIS-Nigeria) has eulogized our National President in the person of Hon Prince Amb ‘Sina Bilesanmi aka Ojueko on his role and efforts for the betterment of subscribers so far by making sure Federal Government with Telecommunications Minister Isa Patanmi surrender for totally suspended the proposed 5% excise duty tax on telecommunication services after series effort’s by our association. The suspension was announced by the Minister of Communications and Digital Economy, Isa Pantami, on Monday during the inaugural meeting of the Presidential Committee on Excise Duty for the Digital Economy Sector in Abuja. According to the minister, the telecommunications sector is already overburdened by excessive and multiple taxations.

The Budget Office of the Federation had earlier revealed that it would begin the implementation of its proposed excise duties on telecommunication services and beverages in 2023 without the consent of Subscriber advocacy body ATCIS-Nigeria and the so-called Ministry of Telecommunications and Digital Economy that’s bad leadership to her as Minister of Finance said by Bilesanmi.

However, Pantami has maintained through several letters against it backed by the law from telecom subscriber body ATCIS-Nigeria, that he is against the implementation of this tax, which would increase the cost of telecommunication services for ATCIS-Nigeria subscribers member.

Sina Bilesanmi the National President, ATCIS-Nigeria telecom subscriber body pointed out that Telecommunication and Information service subscribers contributed N4.84tn to the nation’s real Gross Domestic Product in the first two quarters of 2022 according to data from the National Bureau of Statistics. This is despite the numerous challenges that plagued the industry in the first six months of 2022. The figures 10.76 percent increase from N4.37tn the sector contributed to the GDP in the corresponding period of 2021. In terms of nominal GDP, the sector contributed N7.94tn in the first two quarters of the year. The NBS calculates the sector’s contribution by adding up gross outputs such as revenue from telephone, telex, facsimile, telegraph, and other income from satellite and Internet services.

Telecommunication Subscribers 98.75million registered SIMs were unused in the month of July, according to new industry statistics from the Nigerian Communications Commission. This is as the total number of Sims in circulation remained over 300 million (307.36 million) for the third consecutive month in 2021. Also, the total number of active lines sustained its ascendency to 208.61 million in July, with 2.52 million new subscribers joining the national action network in July. Association of Telephone, Cable TV and Internet Subscribers of Nigeria (ATCIS) was established in August 2014 and duly incorporated by Corporate Affairs Commission on August 24, 2016. It is no doubt, the leading Telecom Subscriber masses advocacy body that promotes Subscriber interests as well as defending Subscriber right, also the backbones of the Telecom’s Sector by promoting and endorses good product and service of Network Operator, Cable Tv and Internet Service providers company to our association members across 36 States converge within Six geopolitical zones with over 208 million active Subscribers membership strength in Nigeria. It is made up of Nigerians and non-Nigerians that use the telephone or have telephone lines either for call purposes or internet access-driven lines. The main vision is to protect the interest of Telecommunications of over 208 million active subscribers as of July 2022 according to the National Bureau of Statistics, members drawn across 36 States within Six geopolitical zones while her mission is to provide a formidable platform to advance the right of Telephone, Cable TV and the Internet subscribers all over Nigeria.

This follows a sustained shake-off of the effect of the National Identification Number and Subscriber Identity Module policy on the telecoms industry, with active subscribers growing by 11.27 percent (21.13 million) year-on-year.

According to the NCC and National Identity Management Commission, one Nigerian could have more than one SIM registered in their name.

from August 24 shifted Founder’s day because of national interest to 18 – 20th October the importance of why you need to support our upcoming Founder’s day celebration, questionnaire complaints form is on, will close September 30th, 2022 for collation and referrals with Google our expected guest are President Federal Republic of Nigeria, Senate President, Speaker House of Rep, Governor Forum, 36 state commissioner of science and technology, Ministry of science and technology, Communication, NCC, NBC, All Telecom Company, Internet providers.

On advocacy alone, ATCIS-Nigeria has spent about N511 million naira according to our financial records since 2014 till date, which has been self-sponsored by Subscriber members. Our Association of Telephone, Cable TV, and Internet Subscribers of Nigeria has made several impacts on history in what people believe it can’t it can’t be possible with over 804 newspaper publications, both local and international as well as online news publications, Radio, and National television station interview with about 272 success achievements so far to the benefits of every Telecom Subscribers across Nigeria.