Home Entertainment “Not Everything You Seek, Is Seeking You”: Olamide Reacts to Netizens Linking Him to Portable’s Behaviour 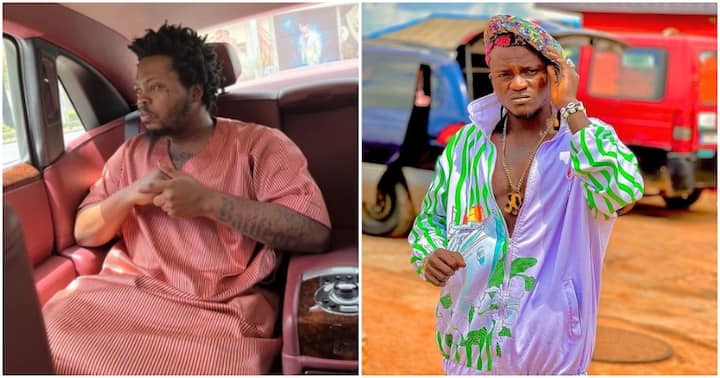 “Not Everything You Seek, Is Seeking You”: Olamide Reacts to Netizens Linking Him to Portable’s Behaviour The YBNL boss in a subtle manner took to his Insta-story to drop a message that distances himself from Dr. Zeh’s ways

Popular ace Nigerian singer Olamide seems to have had enough with the constant linking of him to the controversial singer Portable.

The notoriously loose-mouthed singer had talked his way into trouble on Monday, July 18, when he took to his Instagram page to claim he was the founder of the vicious cult group “1 million boys”.

Soon after he made the statement, the Lagos state commissioner of police, Abiodun Alabi ordered a probe into the declaration.

On Monday, July 18, Portable released another video claiming he made a mistake with his earlier statement, and that what he wanted to say was 1 million followers not “1 million boys”.

However, netizens across the board have continued to call out Olamide for helping to bring such an unbridled fellow to limelight on a platter of gold.

The father of one, in response to the call out, took to his Insta-story and shared a post that reads:

“Let go, not everything you seek is seeking you.” Olamide speaks about links to him being responsible for Portable’s behaviour Photo credit: @olamide Source: Instagram

See what Nigerians are saying about Baddo Sneh giving Portable a platform for success;

“Don’t even blame olamide for anything. Nobody’s fault! Portable is just an Animal.”

“I don’t blame Olamide though. The guy just has a good heart and has always strived to help boys out of the trenches. Look at Fireboy, look at Adekunle Gold, look at Lil Kesh. Even Lyta sef.

“This Portable case was just a wrong turn. So raz, uncultured and stup!d. Blame Poco Lee.”

“Why does everyone always point the finger at Olamide whenever Portable does something wrong? Do you really expect Baddo to be telling a man in his 30s how to live his life? He gave him a stage on which to excel, just like the other artistes he had supported. Rest please…”

“Thank God Olamide no sign Portable because of one hit song, he for tarnish the name of the Record label.”

Earlier today Nationnewslead reported that controversial Nigerian singer Portable had addressed the statement he made about being the founder of the dreaded one million boys group.

The Ogo forever crooner, who had earlier shared a video to refute the claims, has chosen to release an official statement to note that he was only referring to fans.

In the new video, the singer claimed that he meant he has one million fans and not that he founded the One Million Boys cult group. Continue Reading