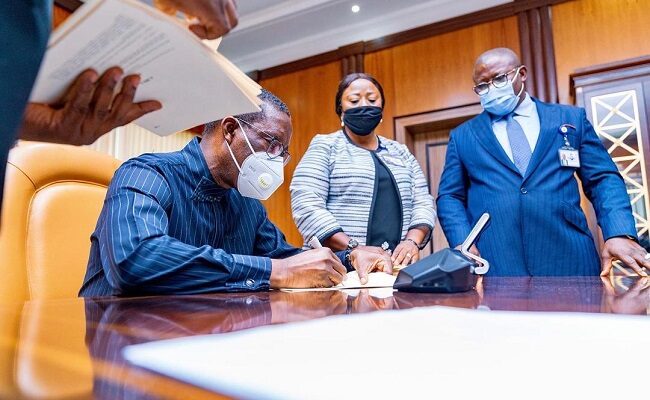 The Delta State appropriation bill of N571.64 billion for 2023 was on Friday signed into law by Governor Ifeanyi Okowa who also used the opportunity to flay the All Progressives Congress (APC) in the state over what he described as negative criticism.

While saying it was high time the party kept mute, Okowa said members of APC in the state were either blind to the numerous projects and human capital development in the state or they refused to acknowledge his administration’s performance for obvious political reasons.

The budget, which is the last to be signed by Okowa as governor of the state, comprises N235.5 billion for recurrent expenditure and N336.1 billion for capital expenditure.

In his remarks after signing the bills, Okowa assured Deltans that the state would strive to implement capital projects embedded in the 2023 budget as well as endeavour to complete ongoing projects before the end of his tenure.

He commended the House of Assembly for its cooperation over the years, adding that his administration couldn’t have achieved the much it did without the strong support of the Assembly and Deltans.”

On the other bills signed into law, he said they would contribute to the socio-economic development of the state and thanked the lawmakers for their commitment to duty.

Presenting the Bills earlier, the Speaker of the Assembly, Chief Sherrif Oborevwori, said that the bills went through all legislative processes before being passed.

He expressed appreciation to the governor and members of the House for their support and cooperation over the years he served as the longest-serving Speaker of the House of Assembly.

Meanwhile, the governor reminded APC of his numerous achievements including constructing and linking communities with over 2,000 kilometers of roads and thousands of line drainages across the three senatorial districts in the state.

He said that the bridge being built across Ewu River would, on completion, connect 11 abandoned communities in part of Delta Central.

“For those making very funny comments, it shows that they are not even prepared to come into governance because governance is not all about building bridges and roads, it’s about developing the people with the provision of needed infrastructure.

“There are so many things to speak about and I think it is time for the APC in this state to shut up their mouth. It is not enough to bring in a few poles of street lights that may not last more than three months and you call that development.

Okowa said that his administration had trained several youths and women and had empowered them with starter packs, adding that “we have continued to mentor them and they have continued to impact the economy of the state.

He quipped: “We will remain eternally grateful to the people of Delta and the House of Assembly, and with my Deputy Governor, we remain entirely grateful to all those who have worked with us even for the cooperation of the judiciary.

“We will continue to take steps to fulfill the promises we made to our people even as we have delivered on several projects even in the riverine areas and it’s something that we are proud to talk about.

“We have revamped our schools to good functionality even as we have built and delivered three model technical colleges which had since commenced academic studies at Asaba, Effurun, and Obiaruku.