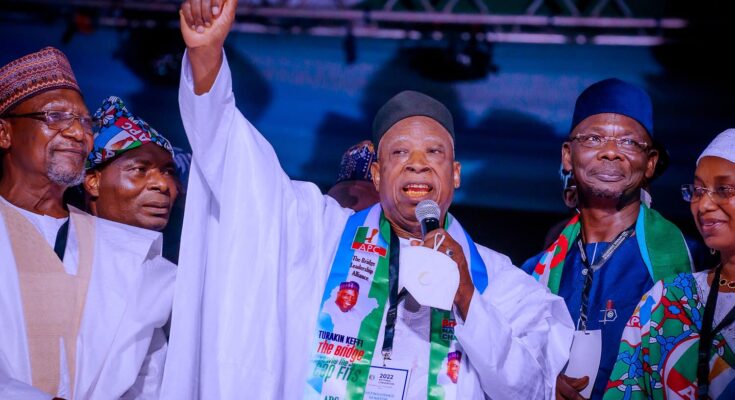 Ahead of the July 16 governorship election in Osun state, the People’s Democratic Party (PD), has tasked President Muhammadu Buhari to reign in on the National Chairman of the All Progressives Congress (APC), Senator Abdullahi Adamu to allow will of the people prevail during the poll.

Adamu had during the inauguration of the party campaign council in Abuja said the APC would not spare PDP in the Governorship poll like it did in Ekiti and members of the council should do whatever legally possible to win the election for APC as it has zero tolerance for failure.

The Osun PDP Caretaker Chairman, Dr Akindele Adekunle in a statement he personally signed on Friday, urged the President Buhari to curb Adamu from setting the state on fire.

The statement reads, “It has come to the notice of the Osun state chapter of the Peoples Democratic Party (PDP) of an open call by the All Progressives Congress (APC) National Chairman, Abdullahi Adamu, for the July 16 governorship election to be rigged in favour of his party. We call on Predident Muhammadu Buhari to call the APC Chairman to order before he sets Osun ablaze.

“Before now, our party has expressed fears on the desperation of the APC to scuttle the holding of a free and fair election in Osun state. Adamu, proved our fears right. In the video that is now viral, Adamu could be heard given a matching order to members of his campaign council to win Osun state by whatever means necessary.

“It is a public knowledge that APC abhors a free and fair election, but we never contemplate a time that the party will be so bold to issue a rigging directive openly. We must also note that Adamu comment of “not spearing him for any reason whatsoever” is a direct threat on the life of our candidate, Senator Ademola Adeleke, and we will hold the APC chairman responsible for any bodily arm that come to our party’s flagbearer.

“We wish to warn Adamu and his crew of election riggers to stay clear of Osun or have themselves to blame in the end. Our people are ready more than ever to exercise their franchise and make sure it prevails.

“The APC chairman and those hiding in the shadow should perish the thought of rigging this election. This is not 2018 and we hope they will take to this cautionary note. Our party demand is simple- let Osun people decide their Governor.

“Nothing, not even the inducement of money as was done in Ekiti through the art of “Dibo kosebe” will change this resolve. Let Adamu and his gang of anti-democratic forces know that Osun election is not the APC, where imposition is the most acceptable route to leadership. Our people will vote and it will count.

“We hereby appeal to President Muhammadu Buhari to reign on Adamu and anyone who seek to prevent Osun people from choosing their Governor. We recognizes President Buhari’s efforts to leave a legacy of credible election and impress on him not to watch Adamu and some members of the APC to frustrate it.

“As a party, we are committed to a free and fair election, and as expected in a democracy, prepared to subscribe to the will of electorate. This is why we would not accept any attempt to rig the forthcoming governorship election, no matter who is involved. We will defend the will of electorate by all lawful means”. Continue Reading