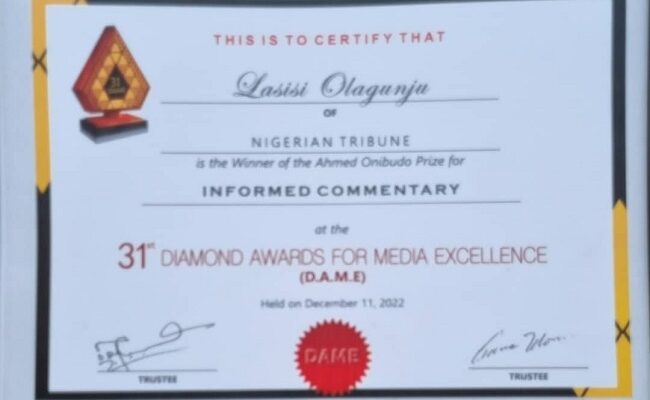 Governor Ademola Adeleke of Osun State has congratulated renowned journalist and columnist, Dr Lasisi Olagunju, for again winning the year’s DAME Award, expressing delight at the feat of winning the award for a record third time.

The DAME Award is a prestigious honour reserved for people who distinguished themselves in their chosen fields. Dr Olagunju received the award in 2019, 2021 and 2022, with the 2020 edition suspended due to the COVID-19 pandemic.

In a congratulatory message on Monday, Governor Adeleke said the award was further recognition of Dr Olagunju’s outstanding contributions to the field of journalism.

The governor, according to the statement by his spokesman, Olawale Rasheed, notes the professionalism, responsiveness and unbending principles of Olagunju, which explains the values according to his work at home and abroad.

“Dr Olagunju is one of the finest professionals we have around and I am excited that his contributions to our environment through his work are not going unnoticed,” the governor noted.

“I congratulate him on being a recipient of the DAME Award. It was a deserved honour going by how much he has used journalism as a tool of positive influence over the years.”

Governor Adeleke expressed hope that Dr Olagunju will continue to make Osun proud and inspire young people in the state and beyond to aim higher in their chosen fields without compromising their integrity.

His citation as read at the award event:

Dr Lasisi Olagunju’s winning work challenges the north to rise above the hypocrisy of not criticizing one’s kinsmen in public, denouncing it as dangerous in the face of growing insecurity. He calls for the progressive redeployment of religion as a tool for peace, knowledge acquisition, and development.

Lasisi shows in this piece that he is comfortable with the English language. He weaves words confidently to convey a unique style that shows a man versed in the cultural wisdom and nuances of his audience. Olagunju’s writing is ever-undergirded by disarming thoughtfulness, logic, courage of his convictions and self-evident scholarship.

Lasisi Olagunju is today, a three-time winner of the Informed Commentary prize at the Diamond Awards for Media Excellence (DAME) having won it in 2019, 2021, and 2022.

He attended Obafemi Awolowo University, Ile Ife where he bagged a First Class Honours in Bachelor of Arts degree in English Studies. He was at the University of Ibadan for his Master’s and PhD respectively in Communication Arts and Political Communication. He also holds a degree in law.

He joined the Nigerian Tribune as Senior Features Writer/Senior reporter and rose to become the newspaper’s News Editor in June 1999 and Deputy Editor in 2001. He was Chief Press Secretary to Osun State Governor from June 2003 to 2008 and Special Adviser on Media to Osun State Governor from 2008 to November 2010. He returned to journalism in September 2011 and became General Editor/Editorial Board member of the Nigerian Tribune till October 2012 when he was appointed as Editor, Saturday Tribune, a position he holds to date.

Olagunju, poet, author, and researcher has published a number of books including biographies. His collection of poems, Forest Flowers, was published in 2008. He writes the Monday Lines column for the Nigerian Tribune and has to his credit, over 500 informed articles written consistently every week for the past ten years.

Dr Olagunju is married with children. It is my pleasure to present Lasisi Olagunju, winner of the Ahmed Onibudo Memorial Prize for Informed Commentary.