Home LOCAL NEWS OSUN GUBER 2022 RESULT: Indeed, You Won The Election But I won The Count 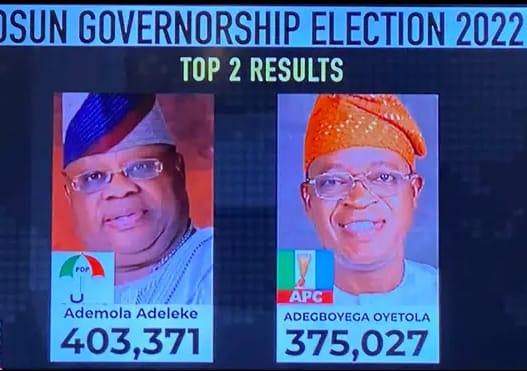 OSUN GUBER 2022 RESULT: Indeed, You Won The Election But I won The Count Now that Governor Gboyega Oyetola has challenged the outcome of the July 16 governorship election results, the question of who will resume in the driver seat of Osun remains dizzying in the eye of many.

The main opposition party (PDP) in the July 16 Osun election gave itself an orientation on how not to lose elections and protected the science of counting and recording votes. The ruling (APC) is too confident to know how to count anything or make anything count. It uses Stalin as its motivator in its engagement of power politics and the politics of power.

One can be very emotional about political things. I love to read what politics does to people and politicians. The love is as much as what soccer fans have for football and star players. More importantly, how well (or unwell) our judiciary handles Osun fate will surely become referenced in the history of election petition cases.

British newspaper, “The Times” published a letter on 27 August 1859 on how popular elections can hurt the people and the polity. The writer said that if care is not taken, “the side which has the greater number of dishonest men will poll the most votes’. This side would always “cast the greatest number of votes with the smallest number of voters”. A wise party will do character assessment of the other side, make war preparations and take precautions.

The opposition party saw no contest as minor, constantly building defensive moats and armouring its tanks.

Can Muhammadu Bulari deleted Goodluck Jonathan in 2015 if he had not built an army of generals and if he had stuck to his provincial party, the CPC? Can Bola Tinubu become leader of a national party if he had not bent backwards to accommodate a very difficult Buhari? Would Tinubu get APC presidential ticket if he had not prepared his long spoon to share dinney with cabals? Leaders of the ruling party were bickering over the presidential ticket while the opposition party snatched (General) Rauf from them unlike 2018 where the ruling hijacked the show through Apesin of the source.

Joseph Stalin once said he did not care how people voted, but how the votes were counted and who did the counting. Whatever noise came from the July 16 Osun election results, please blame the election umpire; do not blame the PDP who knows how to win (though failed to take perfect precautions).

Talented British playwright and screenwriter, Tom Stoppard, wrote in the Jumpers, a 1972 play, that it is not the voting that is democracy; it is the counting. British author George Creel wrote of the counting of votes in his 1922 novel Uncle Henry: “There’s more to an election than mere voting, my boy, for as an eminent American once said: I care not who casts the votes of a nation if they’ll let me make the count.”

The question of who won the election and who won the count remains rhetorical till the apex court makes use of its gavel. Continue Reading