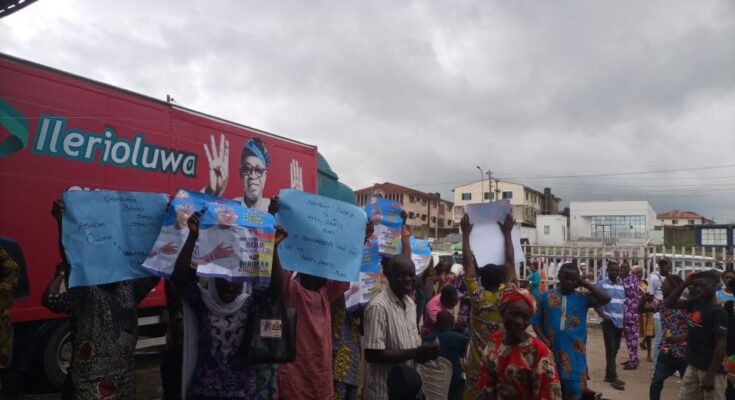 Nationnewslead reports that Some members of the All Progressives Congress (APC) in Obokun East Local Council Development Area of Osun state, on Monday, staged a peaceful protest at Ileri-Oluwa campaign office over alleged manipulation of the result of the candidate for the coming local Government Election in the state.

Protesters in their numbers stormed Osogbo, state capital to registered their grievances over misconduct in the just concluded APC‘s primary election as the party prepares for council poll in October. Speaking, one of the protesters who identified himself as Adeleke Oluwole said that they conducting a peaceful protest to register their grievance over the APC local government chairmanship primary which was contested between Hon. Bamidele Saliu Bello and Abiodun Owoeye.

Oluwole further said that Hon. Bamidele Bello the current chairman of Obokun East LCDA won the primary due to his antecedent in office.

He stressed that majority of APC members are behind the incumbent chairman to contest the forthcoming local government election next month.

According to him, “We heard that they have picked some results, these prompted us to register our displeasure.

“We are surprised with the present situation in our party because, Hon Bamidele won in Ward 6 (Imesi-Ile) and also defeated Abiodun Owoeye in Ward 7 ( Esa-oke) in his base, there was no primaries in two other towns as a result of violence.

In his word, Mr. Timothy Kayode, stressed that the Governor Mr Adegboyega Oyetola had earlier gave a directive to do affirmation for the chairman.

Kayode noted that the state Governor remains the leader of the party which every member of the APC in the state should respect.

When contacted the chairman of the LCDA, Hon. Bamidele Saliu Bello said that he has submitted his petition before the appeal committee of the party. Continue Reading